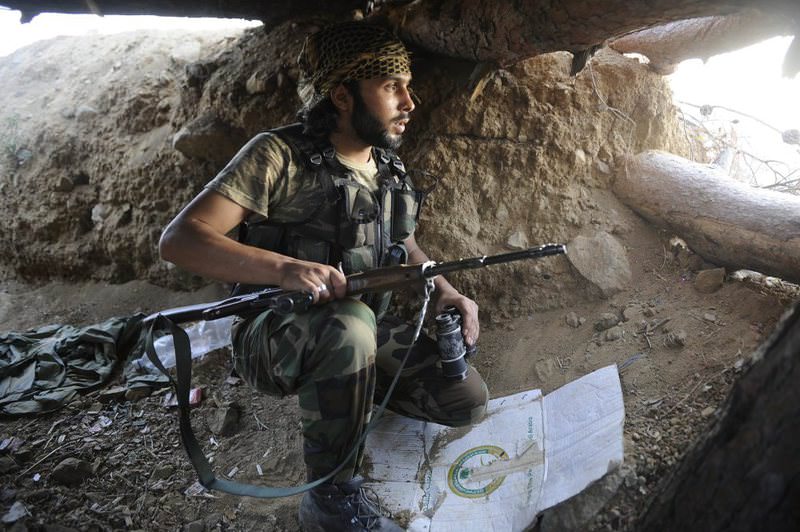 by Daily Sabah with AA Apr 22, 2016 12:00 am
Assad regime forces launched large scale air and artillery strikes in areas held by Syrian Turkmens in the northwestern province of Latakia on Wednesday. Local sources told Anadolu Agency that the regime-held villages of Kelez, Sallur and Karaman, located in Turkmen Mountain, were under fire and that heavy clashes took place as regime forces are trying to advance in Kelez. Because the clashes are taking place in mountainous terrain covered with forests, fires erupted in five different locations near the Turkish border on Tuesday and expanded on Wednesday. Turkish firefighters and forest management units await at the border in Yayladağı district in order to extinguish the fires if they cross the border. Sources added that the regime also launched attacks in areas north of the city of Homs.

The population in the northern parts of rural Latakia known as Bayırbucak are predominantly Turkmens. They have suffered from constant Russia-backed regime attacks since November 2015, which have caused thousands to seek refuge in Turkey's neighboring Hatay province.

The attacks also strained relations between Turkey and Russia and led to a diplomatic crisis when a Russian Su-24 bomber jet taking part in airstrikes in the region breached Turkish airspace and was downed by Turkish F-16 jets. Meanwhile, at least 614 civilians have been killed in Syria since the cessation-of-hostilities agreement took effect at the end of February this year, according to data compiled by Anadolu Agency. The data was based on reports filed by the U.K.-based Syrian Network for Human Rights. The deadliest day since the start of the truce came on Tuesday when more than 50 people were killed in separate attacks in the war-ravaged country.

On the same day, the leader of the Syrian opposition's delegation for the peace talks in Geneva called on the international community to enforce the truce that he said had broken down across large parts of the country. Riad Hijab, the chief coordinator for the High Negotiations Committee, declared that the truce no longer existed on the ground and that more than 550 Syrians had been killed and nearly 1,100 wounded since the "cessation of hostilities" between the warring parties was put into effect. Syria has been locked in a vicious conflict since early 2011, when the Assad regime cracked down on pro-democracy protests. Since then, over 250,000 people have been killed, according to U.N. figures released months ago.
Last Update: Apr 22, 2016 1:56 am
RELATED TOPICS