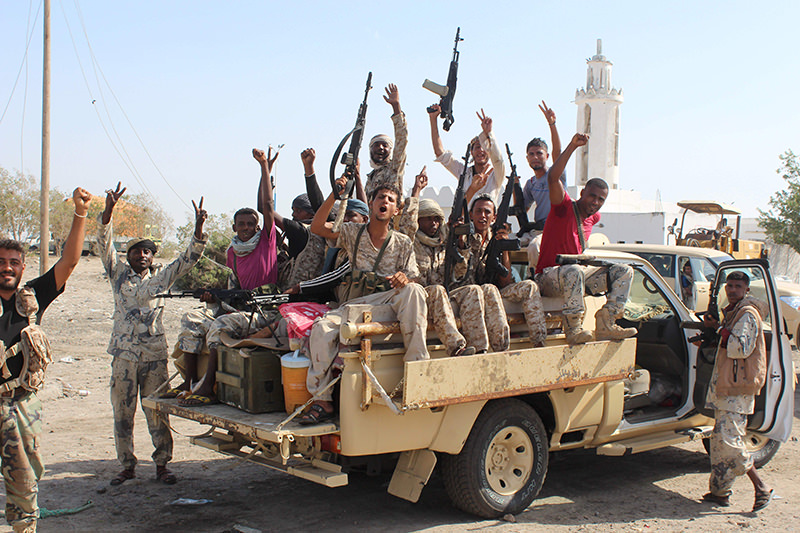 Forces loyal to the Saudi-backed Yemeni president flash their arms as they take part in an operation to drive Al-Qaeda fighters out of the capital,on April 23, 2016. (AFP Photo)
by Apr 24, 2016 12:00 am

Yemeni and Emirati soldiers seized Yemen's seaport of Mukalla from al Qaeda fighters on Sunday, depriving the group of the seaport that enabled it to amass a fortune amid the country's civil war.

Around 2,000 Yemeni and Emirati troops advanced into Mukalla, local officials and residents said, taking control of its maritime port and airport and setting up checkpoints throughout the southern coastal city.

There was little fighting after a mostly Gulf Arab alliance and Yemeni forces mobilised their forces at Mukalla's suburbs, and the militants may have chosen to leave peacefully.

Residents said local clerics and tribesmen had been in talks with the group earlier in the day to exit quietly and that fighters withdrew westward to neighbouring Shabwa province.

Mukalla has been the centre of a rich mini-state that Al Qaeda in the Arabian Peninsula (AQAP) built up over the past year as it took control of an almost 600-km (370-mile) band of Arabian Sea coastline.

The group that has masterminded several foiled bomb plots on Western-bound airliners and claimed credit for the Charlie Hebdo magazine attack in Paris last year was pocketing around $2 million a day in customs revenues from the port.

Fighter jets from the mostly Gulf Arab alliance pounded the city on Sunday and killed 30 militants, residents said, as the military coalition ramped up its offensive to wrest swathes of southern Yemen from al Qaeda.

Sunday's air strikes on al Qaeda in Mukalla were carried out in coordination with a ground offensive in militant-controlled territory further west, a Yemeni military official said.

The push is being led by the United Arab Emirates, which has been training and arming local recruits for months, according to southern Yemeni tribal and political sources.

The UAE is part of a mostly Gulf Arab coalition that intervened in Yemen's civil war in March last year to support the internationally recognised government after it was forced into exile by the armed Houthi group, an ally of Iran.

Sunday's air strikes come as Yemen's government meets with the Houthis in Kuwait to try to find a solution to the conflict.

Around 6,200 people have died in the war, which has focused mostly around the country's Houthi-controlled centre and north, while a security vacuum spread in the south.

The United States has for years used drone strikes to target AQAP. Despite the group's gains in the last year, it managed to assassinate several of its top leaders, including its leader Nasser al-Wuhayshi, blown up on Mukalla's waterfront in June.

Fearing more air strikes, residents reported that local families were bundling into cars and driving out of town.

On Saturday, Yemeni troops battled al Qaeda at al-Koud near Zinjibar, another southern city considered an al Qaeda stronghold, while an air strike from a drone killed two suspected al Qaeda fighters south of the city of Marib.

In a statement on its official Twitter account, AQAP said it carried out a suicide bombing attack against the government troops pushing into al-Koud.

The Houthis control the capital Sanaa in the north while the Saudi-backed Yemeni government has tried to re-establish itself in the southern port city of Aden. Only in the last month has its fledgling army begun to make gains against the militants and organise to take back lost territory.