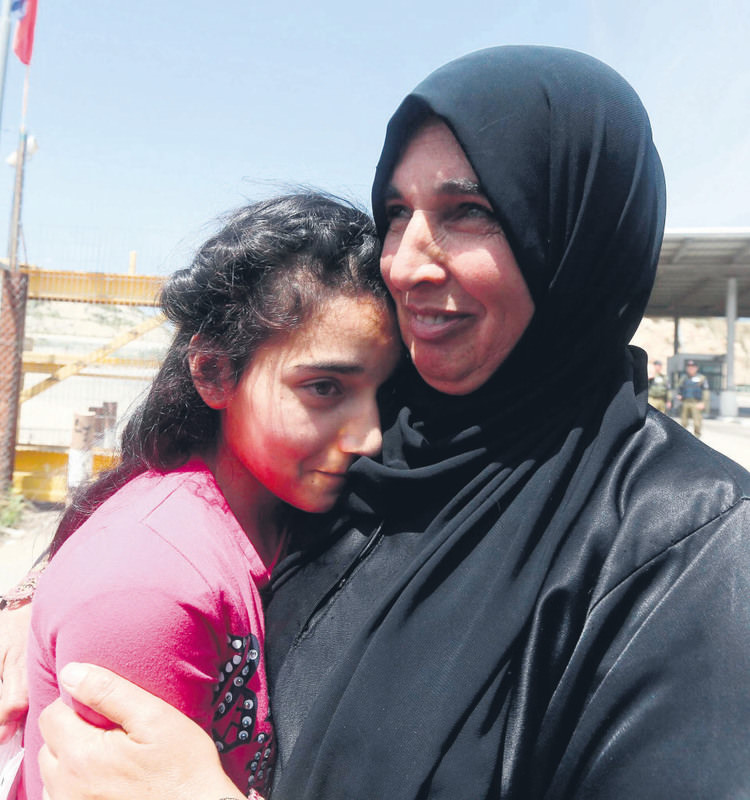 The mother (R) of Palestinian Dima al-Wawi, 12, who is believed to be the youngest female detained by Israel, greets her in the West Bank city of Tulkarem, upon her release from Israeli prison.
by Daily Sabah Apr 26, 2016 12:00 am

A 12-year-old Palestinian girl who was accused of plotting a knife attack on Israeli settlers in West Bank has been freed. Military law allows Israeli authorities to detain children despite contradicting the U.N. Convention on the Right of the Child

The youngest Palestinian prisoner in Israeli jails was released on Sunday following an appeal after spending two months. "A 12-year-old Palestinian girl, imprisoned by Israel after she confessed to planning a stabbing attack on Israelis in a West Bank settlement, returned home Sunday. Dima al-Wawi is believed to be the youngest female Palestinian ever imprisoned. Al-Wawi was greeted by about 80 relatives at her family's house in Halhoul, a village near Hebron, a West Bank city that has been a focal point of violence. Relatives decorated the house with balloons and posters," Associated Press reported. "I am happy to be out. Prison is bad," al-Wawi said. "During my time in prison I missed my classmates and my friends and family," she added. "According to court documents provided by the military, al-Wawi approached the West Bank settlement of Carmei Tsur on Feb. 9 with a knife hidden under a shirt," Associated Press said.

"A security guard ordered her to halt, and a resident instructed her to lie on the ground and told her to give up the knife, which she did. An amateur video clip shown on Israeli TV showed the resident asking the girl, who was wearing her school uniform, whether she had come to kill Jews, and she said yes. She later pleaded guilty to attempted manslaughter in a plea bargain and was sentenced to 4.5 months in prison," the Associated Press report read. Palestinian citizens are subjected to military law that enables the imprisonment of suspects as young as 12. "By contrast, Israeli settlers in the West Bank, as well as Jewish and Arab citizens of Israel, are subject to Israeli civil law, which does not allow anyone under 14 to go to jail," Associated Press said. "The incident came amid seven months of violence in which Palestinians have killed 28 Israelis and two Americans in stabbings, shootings and car-ramming attacks in Israel and the West Bank. At least 190 Palestinians have died from Israeli fire. Israel says most were attackers, and the rest died in clashes with Israeli security forces.

Many of the Palestinian attackers have been teenagers or in their early 20s. Israel blames the attacks on incitement by Palestinian religious and political leaders that is compounded on social media sites that glorify and encourage attacks. Palestinian officials say it is the result of despair living under Israeli occupation and frustration over the prospect of ever reaching statehood," Associated Press reported. One of Israel's illegal activities reveals the reason why many Palestinians remain silent against the occupation and oppression is the detention of children, a report said. According to May 2014 dated report, released by Euro-Mid Observer for Human Rights said that Israel detained 2,500 children between January 2010 and June 2014, 400 of the children were between the ages of 12 and 15. The report said the detention of children violates Article 37(b) of the Convention on the Right of the Child (UNCRC), which was ratified by Israel in 1991. The UNCRC, which was proposed by the U.N., differentiates the detention of a child from an adult and narrows the legal boundaries for detaining a child: "No child shall be deprived of his or her liberty unlawfully or arbitrarily. The arrest, detention or imprisonment of a child shall be in conformity with the law and shall be used only as a measure of last resort and for the shortest appropriate period of time." The report said that mostly, families are not informed of detentions and 75 percent of the ill treatments of children during and after detention meet the international criteria for torture. The report said more than half of the detentions were made at night, between 2 am and 5 am by surrounding the children's homes with tanks and other military vehicles, even blowing open the front door and entering inside with masks on without giving any warning. Although the International Covenant on Civil and Political Rights states the condition that all people must be informed of the reasons for their arrest at the moment they are detained.

The majority of Palestinian children were deprived of receiving legal help, according to the report. "In most cases, Israeli authorities immediately interrogate detainees without waiting for the presence of an attorney. Israeli authorities also never allow children's parents to accompany them and do not inform them of the reasons for their detention. Yet article 37 of the Convention on the Right of the Child states that youth and their parents must be informed of the reasons behind their detention, as well as allowed legal assistance." A report released by UNICEF in 2009 revealed that Israel bases its punishments on confessions after interrogators coerce children to admit to the charges claimed by Israeli forces.

The report said it is very common in Palestine to be arrested by Israeli forces without being informed of the reason why. One of the laws allowing security forces to detain someone who is carrying prohibited literature, which was made during the period of the British Mandate in1945, is still in effect. A person who was detained under this law can face three to 10 years of imprisonment. Israeli forces also detain anyone by claiming that they anticipated a security concern. Israeli security forces detain Palestinians on the basis of arbitrary or flexible laws, and therefore it is not easy to speak up against the oppression happening somewhere else.
RELATED TOPICS