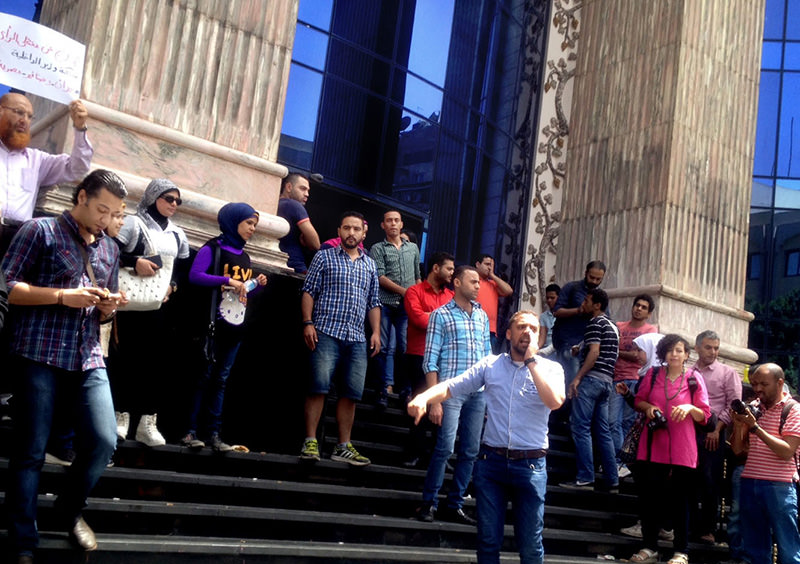 Egypt's journalists' syndicate called for the dismissal of the interior minister and an immediate sit-in at its headquarters in downtown Cairo on Monday, to protest the police detention of two journalists on its premises the night earlier.

After an emergency meeting in the early hours of Monday morning, the group called for the "open-ended" sit-in to run through a Wednesday general assembly meeting and World Press Freedom day on May 3.

Later Monday morning, dozens gathered at the steps of the building, chanting "journalists are not terrorists." They plan for a larger demonstration Monday afternoon.

The syndicate described the police's entry into the building as a "raid by security forces whose blatant barbarism and aggression on the dignity of the press and journalists and their syndicate has surprised the journalistic community and the Egyptian people." Some syndicate members have said the raid was heavy-handed, involving dozens of officers and resulted in a security guard being injured.

Police denied they entered the building by force and said only eight officers were involved, who they said were acting on an arrest warrant for the two journalists — accused of organizing protests to destabilize the country. Unauthorized demonstrations in Egypt are banned, and demonstrators subject to arrest.

"The Ministry of Interior affirms that it did not raid the syndicate or use any kind of force in arresting the two, who turned themselves in as soon as they were told of the arrest warrant," the ministry said in a statement.

It was unclear what size any sit-in at the syndicate could achieve. Police, backed by army troops, on Monday had initially barricaded the entire area and prevented people from approaching the building, but they eventually lifted the blockade. Still hundreds of uniformed and undercover police were deployed across central Cairo in order to prevent any protests.

A day earlier, police prevented hundreds of workers from holding a meeting at the building to commemorate International Workers' Day, prompting independent trade union leaders to urge the government to allow them freedom of assembly.

The syndicate has invited the trade union leaders to join the sit-in to denounce the "raid" and protest restrictions on freedom of assembly for labor organizers. It said the move was illegal and violated its charter, which forbids police from entering the building without the presence of a syndicate official, and is urging police to end their "siege" of the building and stop preventing journalists from entering.

The journalists' syndicate has been a rallying point for demonstrations in the past, and was blocked in a similar manner ahead of planned anti-government protests last Monday.

The building drew particular attention because it was from there that some 2,000 demonstrators gathered last month to protest el-Sissi's decision to hand over two Red Sea islands to Saudi Arabia. Police fired tear gas and arrested dozens to break up the protests, the first significant wave of street demonstrations since the former army chief became president in 2014.

A second round of mass demonstrations over the issue planned for last Monday were stifled by a massive security presence, with hundreds of arrests and only small flash mobs managing to assemble, drawing tear gas and birdshot from the riot police.