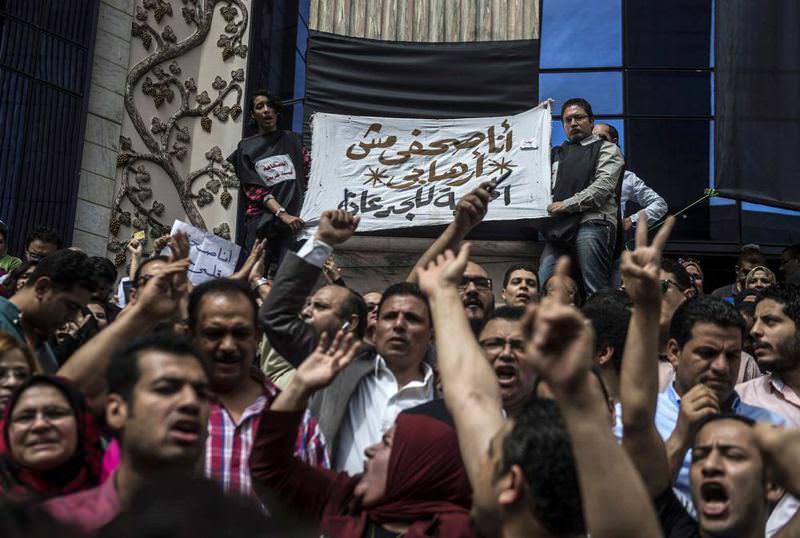 Journalists hold a banner in Arabic that reads: ,I am a journalist not a terrorist,, during a demonstration outside the Journalist Syndicate headquarters in Cairo.
by Compiled from Wire Services May 07, 2016 12:00 am

Egyptian President el-Sissi, who took power after ousting Egypt's first democratically elected President Mohammed Morsi, has been increasing pressure on the media and preventing it from investigating resurging police abuses while ignoring criticism of his policies

Egyptian President Abdel Fattah el-Sissi vaunted on Thursday his "unprecedented" economic achievements, ignoring mounting criticism by opponents and the press after police raided a journalists' union to arrest two reporters. El-Sissi, a former army chief who toppled Mohammad Morsi, Egypt's first democratically elected president, in 2013, has faced steadily growing dissent over what critics call his regime's heavy handedness. On Thursday, several private Egyptian newspapers called on him to apologize for a police raid on Sunday to arrest two reporters inside the Journalists' Syndicate in Cairo. A day earlier hundreds of journalists protested at the syndicate's headquarters in Cairo and demanded that the interior minister be sacked. But in a live address broadcast on state television El-Sissi, who has shown little patience for critics in the past, ignored the furor and touted his economic accomplishments, warning again that "evil" people were conspiring against Egypt. El-Sissi said that during a recent trip to the coastal city of Alexandria supporters shouted at him: "We are with you, don't be scared!" "I am talking to the Egyptian citizen who is telling me: 'Don't be scared.' No, I am the one telling him not to be scared," El-Sissi said, speaking at an event to kick off of a harvest of 1.5 million acres of crops on reclaimed agricultural land in western Egypt. El-Sissi said what has been accomplished during his time in office was 'unprecedented'. He said Egyptians' lives were being improved by a new network of roads and an increase in electrical production. He also spoke about plans to build factories in Sinai to shore up the economy of the impoverished peninsula, where authorities are facing a deadly insurgency by militants, affiliated to DAESH.

Egypt's economy has been damaged by turmoil since an uprising overthrew strongman Hosni Mubarak in 2011 and militant attacks since have taken a toll on tourism. The economy grew by 4.2 percent last year, according to International Monetary Fund figures, but has yet to return to pre-2011 expansion rates and the IMF expects growth to slow this year. Tourism revenues slumped 15 percent in 2015 and Egypt's foreign currency reserves are under intense pressure, falling to $17 billion in April from more than $36 billion in 2010. El-Sissi said his task was to build a proper state. "We are not a real state... we are talking about a state of law, and institutions, respected by the world," he said. But the stronger the state grows, he said, the more "the people of evil conspire" against it.

El-Sissi often makes such references to unidentified conspirators in his speeches, sometimes alluding to supporters of former president Morsi. Following Morsi's ouster, authorities killed hundreds of pro-democracy protesters and jailed thousands in a crackdown that extended to secular activists. Dissent is growing and some former allies have turned against El-Sissi, particularly over a resurgence in police abuses. Last month, a deal to hand over two islands in the Red Sea to Saudi Arabia provoked a storm of outrage in Egypt, with more than 1,000 people holding a rare protest in Cairo to denounce the deal.

For many years, Egypt's Syndicate of Journalists has been a venue for Egyptians to voice their grievances against the government. In recent days, the syndicate, a professional association recognized by the state, grabbed headlines after hundreds of journalists demonstrated against a police raid on their headquarters to arrest two reporters. Syndicate officials have decried the raid -- the first in the syndicate's history, as a "blatant assault on journalists' dignity" and have demanded the interior minister's dismissal. The interior ministry, for its part, said the arrest of the two journalists had been carried out in accordance with the law and in line with a warrant issued by Egypt's prosecutor-general. In 1941, the syndicate was officially established by a royal decree after more than 50 years of journalists' struggle with the government to acquire that right. The first syndicate council was appointed the same year under journalist Mahmoud Abul-Fath. In 1947, Abul-Fath laid the cornerstone for the current headquarters of the press syndicate in central Cairo, which was officially opened in March 1949. "At the time, the building accommodated around 400 journalists," leftist journalist Hussein Abdel-Raziq told Anadolu Agency. In 1954, the syndicate's council was dissolved by Egypt's revolutionary council, which came to power in 1952 after ousting the country's king. In 1960, former President Gamal Abdel-Nasser nationalized the Egyptian press in an effort to steer coverage toward the country's socioeconomic issues and galvanize public support for his socialist measures. In 1970, President Anwar Sadat came to power in Egypt following Abdel-Nasser's death. In 1973, the syndicate's electoral system was changed, allowing the syndicate's chairman to be elected directly by the council members every two years. The members themselves are elected separately every four years, with a renewal period every two years. "Sadat has adopted an open policy toward the press," Hussein Amin, an Egyptian academic, told Anadolu Agency. "His policies toward the media, however, were marked with contradictions; while he lifted some aspects of censorship, he maintained the government's control over the media." The era of President Hosni Mubarak, who came to power in 1981, saw several protests by journalists to defend press freedoms in Egypt. In 1995, the press syndicate rose up against a law enacted by parliament, which was meant to restrict press freedoms.

In 2002, the syndicate's building was rebuilt by former syndicate chairman Ibrahim Nafae. "Since then, the building has become a magnet for all Egyptians, who have grievances," veteran journalist Qotb al-Arabi told Anadolu Agency. Syndicate council member Abdul-Souad Mohamed recalled that the syndicate's headquarters saw several protests against restrictions of press freedoms during Mubarak's era. "The headquarters was a gathering point for demonstrations meant to defend press freedoms," he said. "The syndicate's building has also played a major role in the January revolution [against Mubarak]."