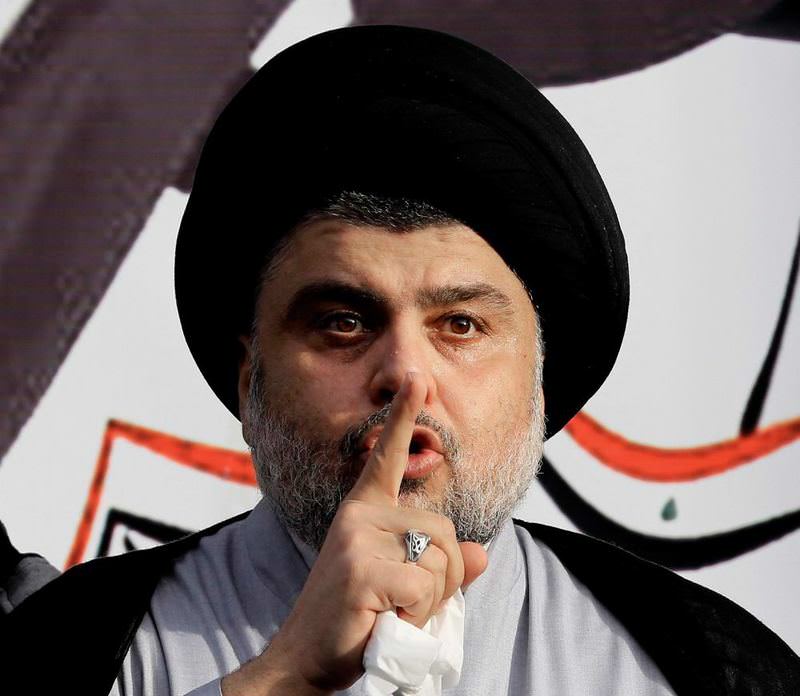 by Associated Press May 11, 2016 12:00 am
After more than a decade of dipping in and out of Iraqi politics, Muqtada al-Sadr, the young Shiite cleric who first made his name fighting U.S. forces in post-2003 Iraq, is leveraging his enduring popular appeal to again roil Iraq's political order. On April 30, when his supporters invaded the highly fortified Green Zone in the Iraqi capital and overran the parliament building to demand political reforms, it marked a dramatic escalation of a long-simmering standoff between Iraq's powerful political blocs. While al-Sadr's most recent show of force has been playing out in central Baghdad, the core of support that fuels his power lies on the city's northeastern edge. In Sadr City, the Shiite dominated neighborhood renamed after the cleric's family in 2003, al-Sadr's support doesn't stem from how he's played his political hand but from his lineage. Born to a prominent Iraqi family, al-Sadr's uncle Grand Ayatollah Mohammed Baqir al-Sadr was executed by Saddam Hussein in 1980. In 1999, al-Sadr's father Mohammed Sadiq al-Sadr was shot dead along with two of his sons in Najaf. On the streets of Sadr City, images of al-Sadr, his father, and uncle are ubiquitous behind tangles of electrical wires along densely packed roads.

Abdul-Khaliq Hussein Akhlati's sitting room is lined with larger-than-life portraits of al-Sadr and his father. "Honestly, I can't explain my love for him, I can't describe it," Akhlati said, gesturing to the pictures on his wall. "For us the most important thing is that he fought Saddam and then he fought the Americans and now he's fighting all the corrupt (politicians)." However Akhlati admitted that life for him and his family hasn't improved since the 2003 U.S.-led invasion that overthrew Saddam. Conditions in Sadr City have largely deteriorated, government electricity is only provided a few hours a day, most of Akhlati's sons are out of work and the prices of food have steadily risen. But he doesn't blame al-Sadr, saying it's the fault of the corrupt Green Zone lawmakers that al-Sadr opposes. "That is just the fault of the thieves," Akhlati said.

From 2003 to 2011 al-Sadr's Mahdi Army fought multiple battles with U.S. forces, on the streets of Sadr City and most notably in August 2004, when they waged a protracted battle with American troops in Najaf. In 2011, when U.S. forces withdrew from Iraq, al-Sadr technically disbanded the militia. When Mosul, Iraq's second largest city, fell to DAESH in 2014, al-Sadr resurrected his militia under a new name: the Peace Brigades. However, his forces have been in many ways sidelined in the fight against DAESH while militias with closer ties to Iran such as the Badr Brigades, Asaib Ahl Haq and Kataib Hezbollah rose in prominence. As the fight against DAESH in Iraq dragged on and an economic crisis in the country deepened, discontent rapidly spread across the country, erupting in protests last summer that mobilized millions to demand sweeping government reforms to remove corrupt and incompetent officials. But Prime Minister Haider al-Abadi's efforts to address those demands have been stymied by a lack of consensus in parliament. The initial protest movement was largely civic and secular in tone, but that changed dramatically once al-Sadr entered the fray and mobilized his supporters. Suddenly the thousands chanting for change were also chanting al-Sadr's name. Stands on the protests' edges sold baseball caps printed with al-Sadr's face and the Peace Brigades emblem.

In the days before the Green Zone breach, the crowds gathered outside the fortified compound at the heart of Baghdad ranged between 55,000 and 70,000 people, according to satellite image analysis done by Stratfor, a private intelligence firm. The occupation of the Green Zone itself lasted just over a day. Al-Sadr's supporters knocked down concrete walls and trashed the parliament building, even physically assaulting some parliamentarians. But the unprecedented show of force ended just as quickly as it began. Following a call to disband, al-Sadr's supporters left the same way they entered in orderly fashion, a testament to his organizational control. "Ever since that day I have been getting messages on Facebook thanking me for what happened," Hakim al-Zamili, a legislator and longtime al-Sadr ally, said of the Green Zone breach. Al-Zamili, the head of the parliament's defense and security committee who formerly led the Peace Brigades, painted al-Sadr as a populist, working on behalf of all Iraqis and willing to do what's necessary to get things done. Al-Sadr only began demanding reform, al-Zamili said, because "he knew that (the people) cannot liberate themselves alone and without his helping hand."

However, al-Sadr's effort to pressure the country's political leadership may only have thrown Iraqi politics further into disarray. Parliament has been unable to meet since its compound was breached, further delaying the approval process of the prime minister's new Cabinet. Dozens of Iraqi lawmakers continue to boycott sessions, citing security concerns. Some have even suggested convening the parliament in another location. Ominously, al-Sadr's power move may have also raised the prospect of a clash between Iraq's various Shiite militias. In the wake of the Green Zone breech, thousands of fighters from rival Shiite militias deployed across Baghdad as a bulwark against protesters and al-Sadr's own militia. Al-Zamili, al-Sadr's close ally and former militia commander, said such a move would not be tolerated a second time. "I told the security forces, if the militias deploy like that again to shoot them," he said.
RELATED TOPICS