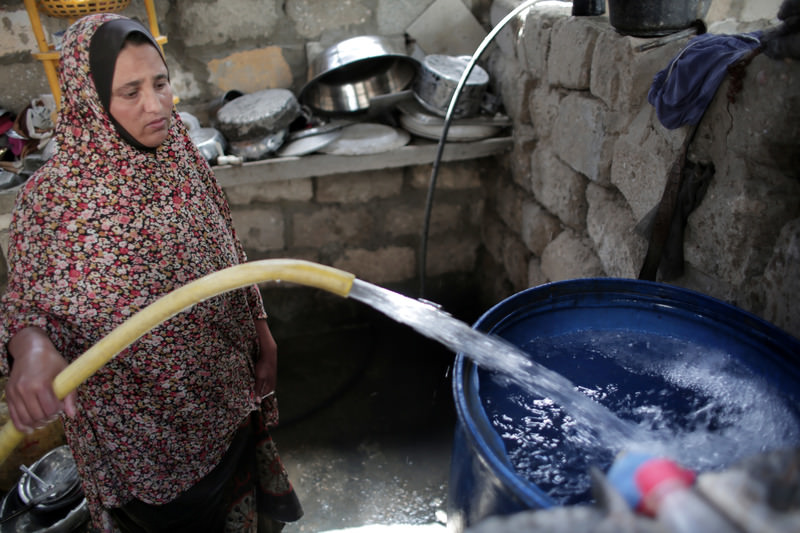 For years, the Palestinians in the blockaded Gaza Strip have been struggling to find enough potable water to meet their daily needs.

In 2006, Israel imposed a crippling siege on the territory, which has adversely impacted its water infrastructure.

In recent weeks, Gazans have begun to notice a change in the color and taste of the water they drink, suggesting that it is contaminated.

"The water is almost yellow and has a strange taste and smell," Marwa Sbakhi, 34, told Anadolu Agency.

Every day, Sbakhi, who lives in the southern city of Khan Younis, buys potable water from desalination plants to use in cooking for her eight-member family.

"The water is yellow and very salty and its taste is unbearable," Abu Daka told Anadolu Agency.

He said he buys some 40 liters of water per day for his family at the cost of four Israeli shekels (roughly $1).

"We can't bear this cost in light of the already tough economic conditions we're facing," he said.

Israel's ongoing blockade of the Gaza Strip -- aided by Egypt -- has created an almost intolerable economic and humanitarian situation for most of the territory's roughly 1.9 million inhabitants.

Monzer Sheblak of the Gaza Water Authority said that most groundwater in the territory was not drinkable.

"The situation is very bad," he told Anadolu Agency, noting that more than 97 percent of the coastal enclave's groundwater was not fit for drinking.

According to Sheblak, the levels of nitrate and chloride in the water are extremely high due to the lack of drain-water projects in the territory.

"High nitrate and chloride levels in the water can lead to disease," he warned.

The official went on to blame Israel for the Gaza Strip's worsening water crisis.

"Israel's wars on the strip have led to the destruction of water desalination plants and drainage water stations," he said.

"Israel's closure of the border crossings, meanwhile, has prevented the delivery of materials needed for carrying out water projects in Gaza," he added, going on to blame donor countries for failing to meet earlier pledges to help rebuild of the war-battered strip.

The Gaza Strip has groaned under a chronic energy crisis since Israel first sealed its borders with the Palestinian enclave in 2006.

The seaside territory requires 400 megawatts of electricity -- of which only 200 are currently available -- to meet the needs of its inhabitants.

The coastal enclave currently has three sources of electricity: Israel, which provides 120 megawatts; Egypt, which supplies 28 megawatts; and the strip's only functioning power plant, which generates between 40 and 60 megawatts.

In January, the Geneva-based Euro-Med Monitor for Human Rights said the Israeli blockade had caused 43 percent of Gaza's total population of 1.9 million to become unemployed.

According to the NGO, 40 percent of Gaza's population is now living below the poverty line while 60 percent are "food insecure".

Fifty-five percent suffer clinical depression, while 40 percent can access water for only between five and eight hours every three days due to insufficient power supplies, the NGO added.