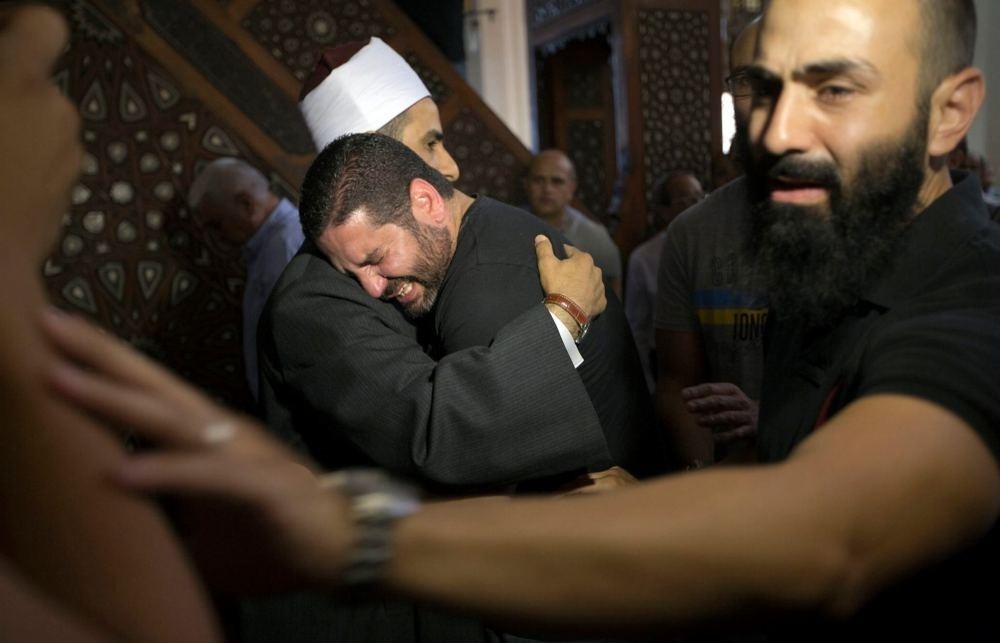 The Imam of al Thawrah Mosque gives condolences to an Egyptian man who lost four relatives, all victims of Thursday's EgyptAir plane crash.
by Compiled from Wire Services May 21, 2016 12:00 am

The Egyptian military has said it has found debris from the EgyptAir passenger plane that was on a flight from Paris to Cairo, and carrying 66 onboard. Egyptian officials said the possibility of it being a terrorist attack is likely

The Egyptian military found the personal belongings of passengers and other debris from an EgyptAir jet floating in the Mediterranean, Cairo said on Friday, confirming that the plane had plunged into the sea with 66 people on board. The navy said it had found the debris about 290 km north of the coastal city of Alexandria and was sweeping the area in search of the plane's black box recorders. President Adbel Fattah el-Sissi offered condolences for those on board, amounting to Cairo's official confirmation of their deaths. Although fingers pointed towards extremist militants who blew up another airliner over Egypt just seven months ago, no group had claimed responsibility more than 24 hours after the disappearance of flight MS804, an Airbus A320 that was flying from Paris to Cairo.

Three French investigators and a technical expert from Airbus arrived in Cairo early on Friday to help investigate the fate of the missing plane, airport sources said. Egyptian Prime Minister Sherif Ismail said on Thursday that it was too early to rule out any explanation for the disaster. The country's aviation minister said a terrorist attack was more likely than a technical failure. Friday's announcement that debris had been found followed earlier confusion about whether wreckage had been located. Greek searchers found some material on Thursday, but the airline later said this was not from its plane. Yet France's foreign minister Jean-Marc Ayrault asserted Friday on France-2 television that there is "absolutely no indication" of what caused the crash. The junior minister for transport, Alain Vidalies, said on France-Info radio that "no theory is favored" at this stage and urged "the greatest caution." Amid fears the plane was downed by an extremist attack, Vidalies defended security at Paris's Charles de Gaulle Airport, saying staff badges are revoked if there is the slightest security doubt.

In October, DAESH claimed responsibility for blowing up a Russian jetliner that exploded after taking off from an Egyptian tourist resort. Russian investigators blamed a bomb smuggled on board. Last year's crash already devastated Egypt's tourist industry, one of the main sources of foreign exchange for a country of 80 million people, and another similar attack would crush hopes of it recovering.

While most governments were cautious about jumping to conclusions, U.S. Republican candidate for president Donald Trump tweeted swiftly after the plane's disappearance: "Looks like yet another terrorist attack. Airplane departed from Paris. When will we get tough, smart and vigilant?" Many hours later his likely Democratic rival Hillary Clinton also said it appeared to be an act of terrorism, although she said an investigation would have to determine the details. Officials from a number of U.S. agencies told Reuters that a U.S. review of satellite imagery so far had not produced any signs of an explosion. They said the United States had not ruled out any possible causes for the crash, including mechanical failure, terrorism or a deliberate act by the pilot or crew. Amid uncertainty about what brought down the plane, Los Angeles International Airport became the first major U.S. air transportation hub to say it was stepping up security measures.

The plane vanished just as it was exiting air space controlled by Greece for air space controlled by Egypt. Greek Defense Minister Panos Kammenos said the Airbus swerved radically and plunged from 37,000 feet to 15,000 before vanishing from Greek radar screens. According to Greece's civil aviation chief, calls from Greek air traffic controllers to MS804 went unanswered just before it left Greek airspace, and it disappeared from radar screens soon afterwards. There was no official indication of a possible cause, whether technical failure, human error or sabotage. Extremist groups have targeted airports, airliners and tourist sites in Europe, Egypt, Tunisia and other Middle Eastern countries over the past few years. The aircraft was carrying 56 passengers, including one child and two infants, and 10 crew, EgyptAir said. They included 30 Egyptian and 15 French nationals, along with citizens of 10 other countries. A320s normally seat 150 people. The plane had made scheduled flights to Tunisia and Eritrea on Wednesday before arriving in Paris from Cairo. At Cairo airport, a man sat on a brown leather couch crying with his hands covering his face on Thursday. "How long will Egypt live if human lives are so cheap?" he said. The mother of a flight attendant rushed in tears out of the VIP hall where families waited. She said the last time her daughter called her was Wednesday night. "They haven't told us anything," she said.
RELATED TOPICS