Iraqi minister: Fallujah is a 'tough nut to crack' 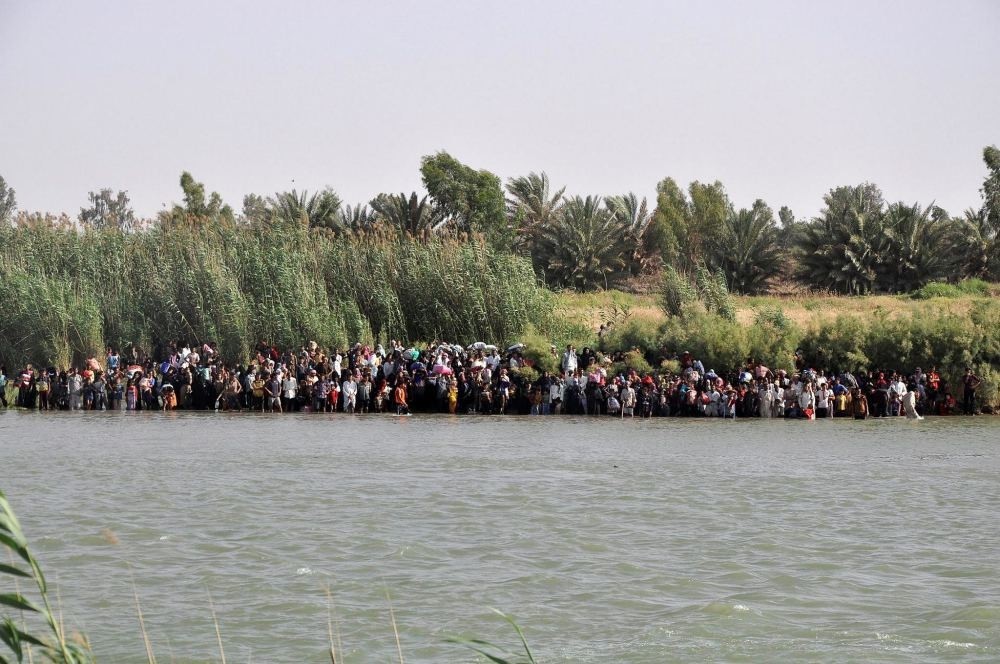 Internally displaced civilians from Fallujah flee their homes, gathering on the edge to cross the Euphrates River.
by Compiled from Wire Services Jun 04, 2016 12:00 am

While the military operation to clear DAESH from Fallujah continues, Iraqi Finance Minister Hoshiyar Zebari said its recapture will take time as DAESH uses the thousands of civilians there as human shields

DAESH is putting up a tough fight in Fallujah and its recapture by the Iraqi army could take time, said Iraqi Finance Minister Hoshiyar Zebari. Fallujah, located 50 kilometers west of Baghdad, has been a bastion of insurgency that fought both the U.S. occupation of Iraq and the Shiite-led Baghdad government. DAESH militants raised their flag there in January 2014 before sweeping through much of Iraq's north and west, declaring a caliphate several months later, from Mosul. "Fallujah is a tough nut to crack," he told Reuters in an interview on Thursday evening." DAESH are holding the population as hostages, not allowing them to escape, and they are putting up a tough fight there," he added. "Nobody can give you a definitive time when Fallujah will be cleared of DAESH. Mainly because of the resistance, because of the IEDs (improvised explosive devices), because of the tunnels" the militants have dug to move without being detected, he added.

The army started the offensive on May 23, with the backing of Shiite militias known as Popular Mobilization Forces (PMF) and air support from the U.S.-led coalition. Prime Minister Haider al-Abadi said on Wednesday the army had slowed the pace of its offensive because of fears for the safety of tens of thousands of civilians trapped in the city with limited access to water, food and healthcare. "The security forces, the PMF have made significant progress but really to storm the center of Fallujah I think will take time," Zebari said. "We should not declare victory prematurely."

A spokesman for one of the main Shiite paramilitary groups taking part in the offensive on Fallujah said the operations have come to a near standstill in the past three days and asked Abadi to order the attacks to continue. "We demand that Prime Minister Abadi continues the operation to free Fallujah and not to submit to American and Western pressure to halt the operation," said Jawad al-Talabawi, a spokesman of the Iran-backed Asaib Ahl al-Haq. "We say ... freeing Fallujah is needed to protect Baghdad." Abadi ordered the offensive on Fallujah after a series of bombings claimed by DAESH hit Shiite districts of Baghdad, causing the worst death toll this year. Fallujah would be the third major city in Iraq recaptured by the government after former dictator Saddam Hussein's home town Tikrit and Ramadi, the capital of Iraq's vast western Anbar province. Abadi has expressed hope that 2016 will be the year of "final victory" over DAESH, with the capture of Mosul, their de facto capital in northern Iraq. Baghdad-based political analysts said the battle for Fallujah would be harder than Tikrit and Ramadi because of the symbolism of the city for the militants and because they cannot retreat to other places, as the whole area is under siege by the army and Shiite militias. "In Fallujah, DAESH has die-hard fighters defending a city they consider as a symbol for Jihad," said analyst and former army general Jasim al-Bahadili. Political analyst Ali Hashim said that even if the government managed to retake Fallujah, it would continue to face the problem of winning over the Sunni population, much of whom have been marginalized by the Shiite-led government and abused by Iranian-backed Shiite militias.

DAESH is entering a new phase with an increased emphasis on attacking international civilian targets, according to a United Nations report circulated Thursday. The report by Secretary General Ban Ki-moon to the Security Council says the global threat from the group remains high and continues to diversify even though its territorial expansion has been halted or even reversed in Iraq and Syria. "Recent international attacks perpetrated by members of DAESH demonstrate that the terrorist group is now moving into a new phase, with the increased risk that well-prepared and centrally directed attacks on international civilian targets may become a more frequent occurrence," the report states. The report notes that in the last six months DAESH has carried out attacks in 11 countries, excluding fighting in Syria, Iraq, Yemen, Afghanistan or Libya, killing more than 500 people and injuring hundreds more. It also said that an increasing number of "foreign terrorist fighters" were returning to their home countries and that while some had done so after becoming disillusioned with the group, many returned with the intent and capability to "conduct terrorist attacks in their country of origin or residence." According to the report, the group is seeking to elevate the role of its affiliates and may even be transferring funds to them as they find themselves under increasing pressure in Iraq and Syria. The report also says that for the first time since the declaration of "so-called Caliphate" in June 2014, the group is under financial pressure with international air strikes reducing oil production by between 30 and 50 percent. Despite this, the report says the group does not appear to be lacking or short on arms or ammunition.
RELATED TOPICS