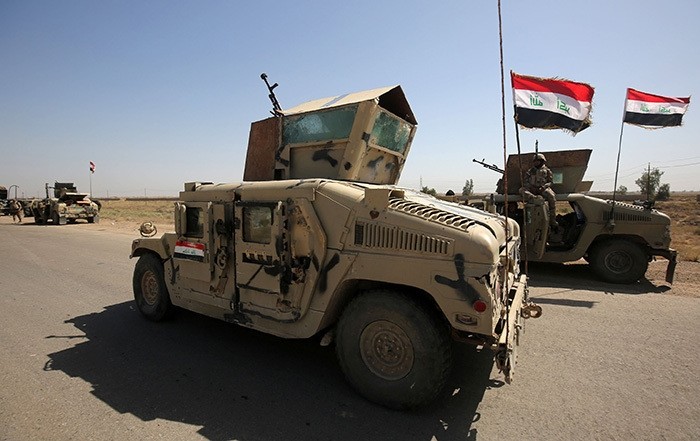 Iraqi government forces take a position outside al-Shuhada neighborhood, south of Fallujah, during an operation to regain control of the area from the Daesh group on June 3, 2016. (AFP Photo)
by Anadolu Agency Jun 06, 2016 12:00 am

A mass grave containing the remains of 400 people was found in the western city of Fallujah, an Iraqi officer has said.

"The mass grave was uncovered in northern Fallujah as security forces were clearing landmines and explosives from the area," colonel Walid al-Duleimi told Anadolu Agency.

He said the remains of 400 civilians and military personnel were found in the grave in the northern district of al-Saqlawya.

"The corpses bore gunshot wounds to their heads," he said.

The Iraqi officer believes that the victims had been killed by the terrorist Daesh group in the period between 2014 and 2015.

Fallujah was the first city to fall to Daesh in early 2014.

"The remains have been moved to the morgue to identify the victims," al-Duleimi said.

The Iraqi government and human rights groups accuse Daesh of killing thousands of Iraqis when the terrorist group seized vast swathes of territory in western and northern Iraq in mid-2014.

Iraqi military officials say that security forces have secured the southern edge of the city.

Meanwhile, a Shia militia commander said that around 4,000 civilians have been evacuated from northern Fallujah.

"We have evacuated 4,000 people from al-Saqlawya district to safe places," Hadi al-Amiri, a leader of the Shia Hashd al-Shaabi militia, said.

The Shia militia has previously been accused of human rights abuses when it has retaken Sunni Muslim territory and Sunni politicians have voiced concerns that the presence of Shia militias could lead to sectarian violence in Fallujah.

Located along the Euphrates River about 50 kilometers west of the Iraqi capital Baghdad, Fallujah is believed to be home to some 90,000 residents.