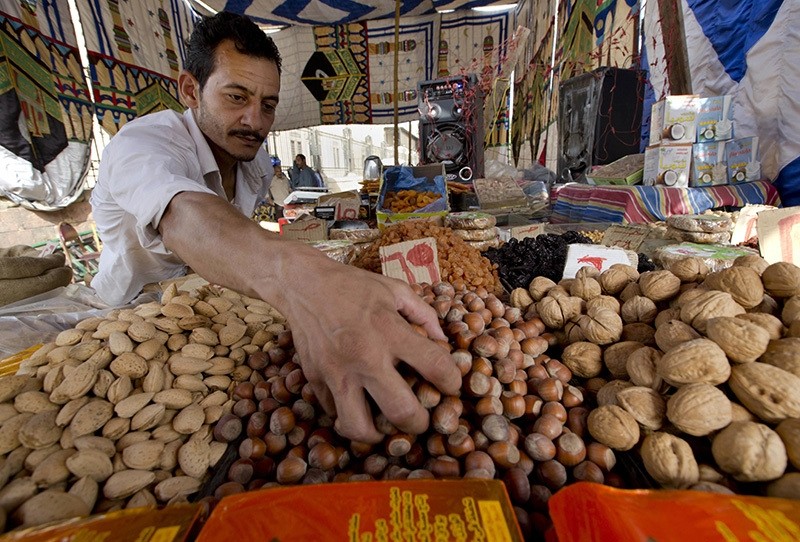 Shop owner Hassan Mahmoud laid out his heaps of dried fruits and nuts at a multicolored Ramadan tent in the Egyptian capital to catch shoppers' eyes for the holiday, like he does every year. Only this time, he said, "people aren't buying."

"Things get more expensive every year but this time it's even worse because the dollar is higher," Mahmoud said as he stood on a street full of similar stands bedecked with lanterns set up for the holy month that began June 6.

Annual inflation hit 12.23 percent in May — the highest level in seven years — driven partly by dollar appreciation. The economy has yet to recover from the 2011 uprising that toppled longtime autocrat Hosni Mubarak, and the man charged with fixing it — President Abdel Fattah el-Sissi — has shown little tolerance for criticism.

The price hikes are particularly painful during Ramadan, when families traditionally break the dawn-to-dusk fast with lavish feasts.

In an attempt to soften the impact on low-income families, the government has opened new, mobile markets offering basic products at discount prices, and the army has fed and distributed basic goods to the poor in highly publicized events. El-Sissi and other officials have meanwhile tried to deflect some blame about higher costs toward alleged manipulation by dishonest traders.

"Although giving out bags of basic goods is good and it helps, it cannot be a solution," said economist Omar el-Shenety of Cairo-based investment bank Multiples Group, adding that inflation has more "chronic" causes. Egypt's imports are more than double its exports and include essential basic goods like wheat, which must be bought in dollars.

In March, Egypt's central bank devalued the pound by over 14 percent, setting the dollar at 8.85 pounds compared to 7.73 previously. On the black market, traders are paying up to 11 pounds per dollar.

In an attempt to shift demand inwards, the government has raised import duties on several products, especially those it labels as luxury goods — including nuts and fruits frequently sold in Ramadan markets. It has also restricted some imports, which el-Shenety says exacerbates the problem. "The resulting lack of goods raises prices even more," he said.

Electricity and water bills are also rising, fuel is more expensive, and pharmacies are running out of some medications, fueling anger on social media. The government has severely cracked down on protests over the past two years, making it virtually impossible to air grievances in public.

El-Sissi has called on Egyptians to "be patient" and urged them to donate to a fund created in 2014 called "Long Live Egypt." He has also defended his decision to slash energy subsidies that year — a step long urged by international lenders but which his predecessors had not dared to enact for fear of a backlash. The move was welcomed by economists, who said the funds would be better spent elsewhere, but the higher costs have contributed to inflation.

The ministry said local manufacturers had been suffering from high raw material costs since the vast majority is imported and priced in dollars, forcing some to shut down and leaving Egyptians with only imported alternatives that cost four to five times as much. Pharmacists say the drug shortages over the past two years have worsened with the pound devaluation.

With parliament set to pass a value-added tax later this year, prices are expected to rise even more.

"Egypt's lower classes are already facing a real problem, but the purchase powers of the country's middle class are also being eroded," el-Shenety said.