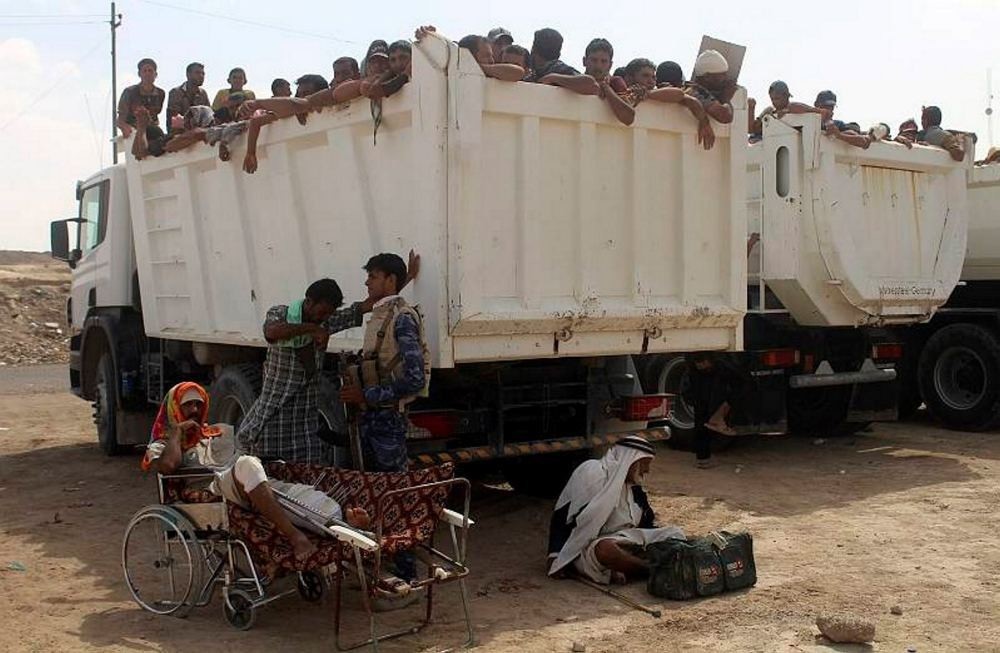 Thousands of Iraqi civilians are trapped between Shiite militants and DAESH.
by Daily Sabah Jun 15, 2016 12:00 am

Human Rights Watch, the Kurdistan Regional Government and even Baghdad have accused Iran-backed Shiite militants of torturing and killing Sunnis while the battle against DAESH continues

Shiite militias are expected to engage with DAESH militants to recapture Iraqi cities. However, it has been reported that militias have been committing atrocities against Sunni civilians. Fallujah has become a battlefield for DAESH and Shiite militias fighting alongside Iraqi forces. Amid the fierce battles, Fallujah residents are suffering from both the presence of DAESH militants and Shiite militias. According to recent reports, hundreds of people died and thousands left their homes. Although the Iraqi government and its allies are expected to help those fleeing the violence, Shiite militias appear to be a new threat. A Human Rights Watch (HRW) report released last week documented the militias arbitrarily detaining, torturing and killing civilians.

The Kurdistan Regional Government (KRG) condemned the militias. As abuses have become apparent, the Iraqi government launched an investigation into rights abuses and arrested some Shiite militants.

After quoting Iraqi Prime Minister Haider al-Abadi, saying that the government took necessary measures to protect civilians, the HRW report said that it has "received credible allegations of summary executions, beatings of unarmed men, enforced disappearances and mutilation of corpses by government forces over the two weeks of fighting, mostly on the outskirts of the city since May 23."

"On June 3, Human Rights Watch received information alleging that members of the Federal Police and the Popular Mobilization Forces [PMF], an auxiliary fighting force created after DAESH advanced in June 2014, and that includes many pre-existing Shiite militias, had executed more than a dozen civilians from the Jumaila tribe fleeing Sajar, a village north of Fallujah," the report said. "Another person who said he was in the Sajar area, 7 kilometers northeast of Fallujah, at the time told Human Rights Watch that on May 28, he saw Federal Police and PMF, including dozens of fighters from the Badr Brigades and Hezbollah [two prominent Shiite militias in the PMF], fatally shoot civilians with white flags raised fleeing toward the government forces that day. He said that a fighter told him his superior officer had ordered the shootings," the report said.

The KRG last week also denounced abuses. "Iraqi army forces and the Hashd al-Shaabi militia must not mistreat civilians in areas recaptured from DAESH," Jabbar Yaver, secretary-general of the KRG's Ministry of Peshmerga Affairs, told Anadolu Agency (AA). "It's unacceptable that civilians are being subject to mistreatment simply because they are Sunnis or were living in DAESH-held parts of the city," he said.

The HRW called on the Iraqi government to investigate the reports of abuse. Joe Stork, deputy Middle East director at HRW, said: "The Iraqi government needs to control and hold accountable its own forces if it hopes to claim the moral upper hand in its fight against DAESH. It's high time for Iraqi authorities to unravel the web of culpability underlying the government forces' repeated outrages against civilians."

The government launched an investigation following the reports, and government spokesman Saad al-Hadithi on Monday said: "The authorities are following up on the violations and a number of arrests have been made. Suhaib al-Rawi, governor of Anbar province where Falluja is located, said on Sunday that 643 men had gone missing between June 3 and June 5, and all the surviving detainees were subjected to severe and collective torture by various means," The Associated Press (AP) reported on June 13.

Other Sunni-populated Iraqi cities like Tikrit and Ramadi have seen similar rights abuses during their recapture. "After the 2003 U.S.-led invasion, the Sunni minority has felt increasingly marginalized by the Shiite majority and the Shiite-led government in Baghdad. In 2006, long-running tensions boiled over into sectarian violence that claimed tens of thousands of lives. DAESH was able to rally Sunni support by portraying its advance as a 'revolution' against the Shiite-led government, and Tikrit fell in a matter of days last June as the security forces crumbled. Restoring security in the city will be a major test of the government's ability to stitch the country back together," AP reported.
RELATED TOPICS