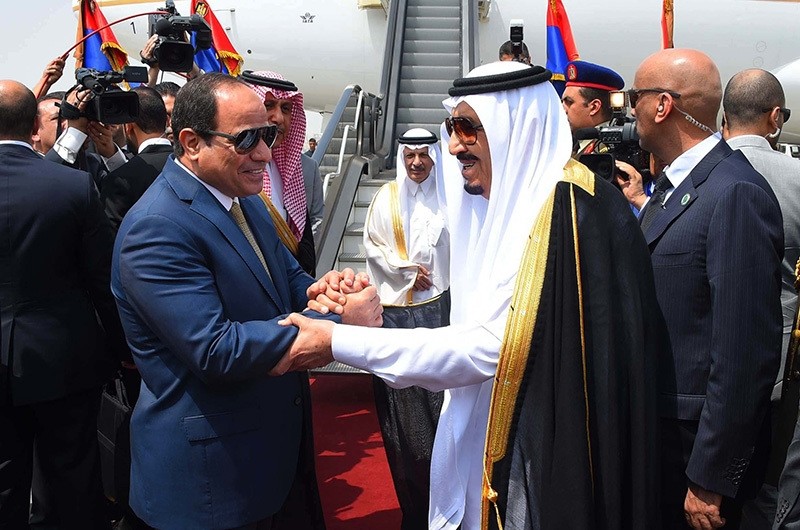 In this Monday, April 11, 2016 file photo provided by the office of the Egyptian Presidency, Egyptian President Abdel-Fattah el-Sissi, left, shakes hands with Saudi Arabia's King Salman before he departs Egypt. (AP Photo)
by Daily Sabah with AP Jun 21, 2016 12:00 am

An Egyptian court has rejected as illegal a demarcation border agreement between Egypt and Saudi Arabia under which Cairo would surrender control over two Red Sea islands to Riyadh.

The Tuesday verdict by the administrative court could deal a blow to President Abdel-Fattah el-Sissi's government, which has zealously argued that the agreement would bring economic benefits for Egypt.

The government also maintains that the islands of Tiran and Sanafir at the mouth of the Gulf of Aqaba are owned by Saudi Arabia, which placed them under Egyptian control in 1950 for protection.

The islands bear strategic importance as they are located on the straits that connect the Red Sea with the Gulf of Aqaba, where Jordan's only sea port of Aqaba and Israel's only Red Sea port of Eliat are located.

In May 1967, Nasser's Egypt's closure of the straits for vessels bound to Israel set one of the main excuses for the Six Day War, in which Israel launched pre-emptive air and ground strikes against Egypt and Jordan. During the war, Israeli troops occupied the whole Sinai Peninsula located on the west of the straits up to the Suez Channel, holding it until 1982. The Gaza Strip was also captured from the Egyptians, whereas the West Bank was captured from Jordan and Golan Heights was captured from Syria. Israeli occupation in all three areas continues to this day.

The verdict can be appealed.

The agreement was announced in April during a high-profile visit to Cairo by the Saudi monarch, King Salman, during which a $16-billion investment fund package to Egypt was announced.

It came a day after Salman announced a plan to build a bridge over the Red Sea to Egypt, the heads of state met at the historic Abdeen Palace in Cairo to oversee the inking of a string of agreements Egypt hopes will help boost its battered economy.

The 80-year-old Saudi monarch's visit to Egypt has been seen as a clear show of support for Sissi, the former military chief who toppled his democratically elected predecessor Mohamed Morsi in 2013.

Saudi Arabia has been a key backer of Sissi since the overthrow of Morsi, whose Muslim Brotherhood movement was viewed by Riyadh with suspicion. It has since pumped billions of dollars in aid and investment into Egypt. Egyptian officials and media have heaped accolades on Salman, with state television welcoming him to what it called his "second country" -- a country Riyadh views as a cornerstone in its ambitions to be a regional leader against Iran.