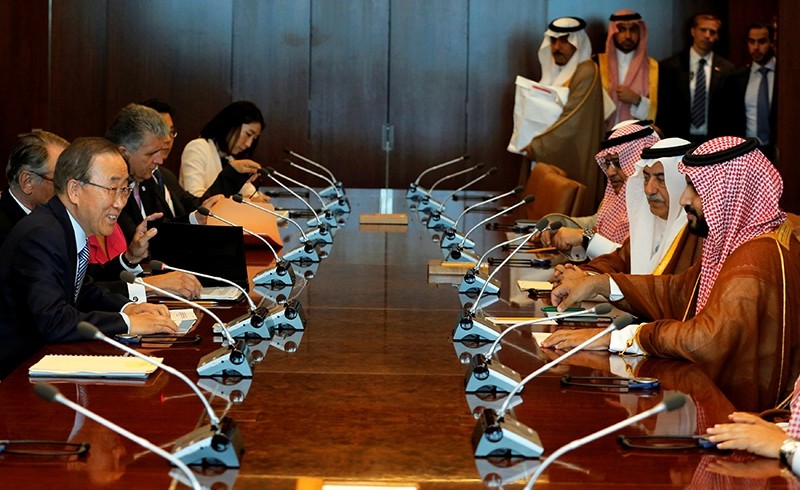 Saudi Arabia's Deputy Crown Prince and the U.N. Secretary-General on Wednesday discussed measures to improve the situation on the ground in Yemen following a controversy that saw a Saudi-led coalition being placed on, and then removed from, a blacklist over the killing and injuring of children.

Deputy Crown Prince Mohammed bin Salman told reporters "I am not angry," upon arriving at the United Nations for a meeting with Ban Ki-moon.

The meeting, requested by the Saudis, comes two weeks after Ban said he temporarily removed the U.S.-backed coalition from the blacklist for violating child rights pending a joint review of cases because its supporters threatened to stop funding many U.N. programs. Ban said he stands by the report, which found that some 1,200 children were killed by coalition forces in Yemen last year.

"The Secretary-General expressed the hope that by the time he presents the Children and Armed Conflict report to the Security Council in August he could point to progress on the protection of children and civilians in Yemen," a statement issued by the secretary-general's office read.

Ban said he was open to receiving new information on the situation in Yemen and that he hoped new discussions would take place soon, according to the statement.

The Deputy Crown Prince also discussed the conflict in Syria, the situations in Libya, Lebanon and the Israeli-Palestinian peace process with the secretary-general, Ban's office said.

During the meeting, Ban thanked Saudi Arabia for its strong political and financial support of United Nations activities including counter-terrorism and humanitarian work, the statement said.

The report on Children and Armed Conflict said the U.N. verified a total of 1,953 youngsters killed and injured in Yemen in 2015 — a six-fold increase compared with 2014 — and it attributed about 60 percent of those casualties to the coalition. The U.N. said it also verified 101 attacks on schools and hospitals last year, double the number in 2014, of which 48 percent were attributed to the coalition.

The Coalition to Restore Legitimacy in Yemen — Bahrain, Egypt, Jordan, Kuwait, Morocco, Qatar, Saudi Arabia, Senegal, Sudan and the United Arab Emirates — has said it is ready to cooperate with U.N. bodies.

Ban has said the coalition's removal from the blacklist was temporary, pending a joint review of cases. He has not said explicitly that the coalition could go back on the list after the review.

When the coalition's removal from the list was first announced, the Saudi ambassador said "it is our firm belief that this de-listing is final, irreversible and unconditional."