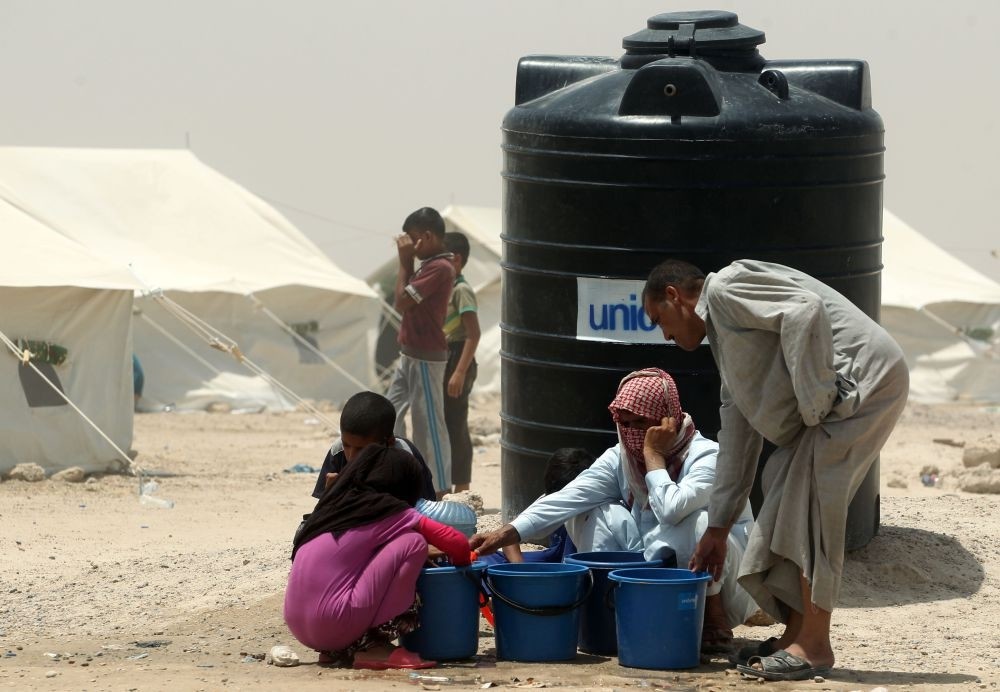 Iraqis displaced from Fallujah gather next to a water tank at a newly opened camp where they are taking shelter in Amriyat al-Fallujah, June 27.
by Compiled from Wire Services Jul 01, 2016 12:00 am

After Iraqi forces liberated Fallujah from DAESH, the humanitarian situation for thousands of displaced people continues to deteriorate, with aid workers saying the situation is the result of collective failure

Vital relief is still failing to reach thousands of Iraqis displaced by the government's offensive to retake Fallujah from DAESH, drawing severe criticism from some aid organisations.

Some groups said that the fact that families were stranded with no shelter and others crammed in camps with no latrines could have been avoided and was the result of a collective failure. The speed with which Iraqi forces made gains against DAESH in and around Fallujah and the subsequent exodus of civilians appeared to catch the aid community flat-footed.

In one camp housing more than 2,000 people in Amriyat al-Fallujah, the only latrine stood on the edge of an open pit. The nearest tents were barely three meters away, children risked falling in and the stench of human excrement filled the entire camp. "We all have a collective responsibility here," Carsten Hansen, the regional director of the Norwegian Refugee Council, told AFP during a visit this week. "The international community, the donors and the Iraqi authorities (must) address this issue, because this is not reasonable for people to live through," he said. One limiting factor that all agree on in the response to the crisis that saw around 90,000 people flee their homes is the lack of funding.

Less than a quarter of the $584 million in projected needs for 2016 has been received so far and additional emergency funding is always hard to raise.

"One factor I would say is almost a standard in the humanitarian world, it is not easy to raise funds toward a contingency plan," Bruno Geddo, the Iraq representative of the U.N. High Commissioner for Refugees, told AFP.

Some aid workers disagree, saying that relief agencies could have done more with the funding they had and criticizing the U.N. for not doing more to coordinate the effort. "It literally seems like every aspect was overlooked, underprepared for or woefully late deploying," said Jeremy Courtney, president of the Preemptive Love Coalition NGO that has been delivering aid to displaced civilians in the area.

"Why were tents not waiting in the desert, three weeks into the conflict, before 60,000-plus were displaced in a matter of days," he asked. "The humanitarian community has really failed in this case, largely because of short-sightedness," said one experienced aid worker.

He said many of the international NGOs with the required skills to handle large crises were not on the ground, many having left the country a few years ago when Iraq appeared to be on the up. "Now these NGOs want access but it takes time," he said, speaking on condition of anonymity.

Another aid worker charged that "the U.N. was bordering on irrelevant in the earliest days of the battle."

The UNHCR representative countered that the world body had done its best but acknowledged that it was not sufficiently informed of preparations for the Fallujah battle and also identified camp management as a major flaw. "Where I must say we are experiencing some level of problem is... the skill to manage camps," he said. "Here, I think we need to do more."

The first aid worker said he had "never seen that level of mismanagement and lack of coordination" and added that even the most basic data on the number of displaced, their location and their needs was hard to come by.

The shortcomings of the aid operation in and around Fallujah give an alarming foretaste of the crisis that could result from an offensive on Iraq's DAESH-held second city Mosul, with the potential number of displaced 10 times higher. "Mosul is going to be the mother of all battles," Geddo said.

Iraqi forces have already begun shaping operations for a massive offensive on the northern metropolis, where hundreds of thousands of civilians still live under DAESH rule. "We have to be realistic, it became obvious it will be impossible to accommodate 600,000 people in camps," he said.

"When you consider the huge numbers involved in Mosul, how much more complicated it will be, if we're not more prepared than we were for Fallujah, it's going to be apocalyptic," Karl Schembri, NRC's regional media adviser, told AFP. "And we're not prepared."

Iraq has suffered a security vacuum since mid-2014, when DAESH captured the northern city of Mosul and overran large swathes of territory in the northern and western parts of the country. Iraqi security forces launched a major offensive on May 22-23 to retake Fallujah, one of DAESH's most emblematic bastions, which lies only 50 kilometers west of Baghdad.

In total, more than 3.3 million Iraqis have fled their homes since DAESH swept across northern and western Iraq in the summer of 2014, according to U.N. figures. More than 40 percent of the displaced are from Anbar province.
RELATED TOPICS