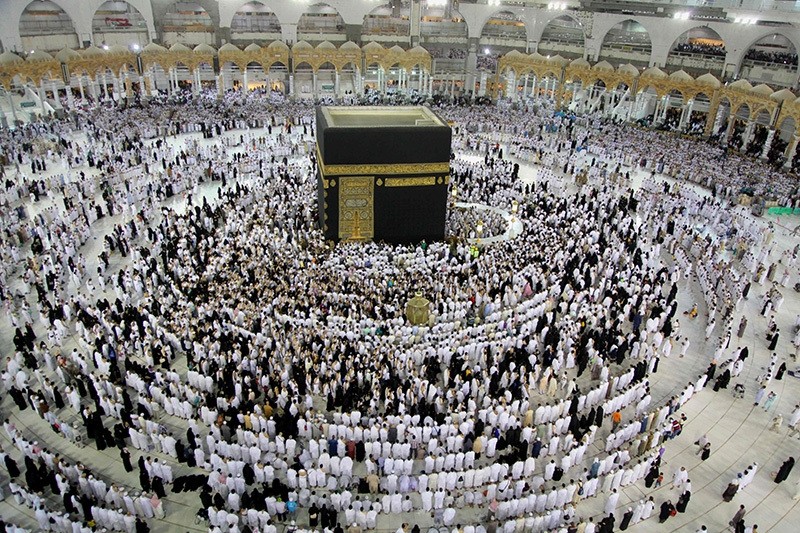 Muslims from all around the world are seen breaking their fast during the holy month of Ramadan at the Grand Mosque, which contains Islam's holiest site the Kaaba (C), in Mecca on June 8, 2016. (AFP Photo)
by Daily Sabah with Agencies Jul 02, 2016 12:00 am

At least 18 pilgrims have been injured in a stampede near Islam's holiest site, Qa'ba, Saudi media reported on Saturday, as the kingdom continues to review safety after a deadly crush during last year's hajj.

The incident happened on Friday night near the Grand Mosque in Mecca, the Al-Riyadh newspaper said, as Muslims gathered in large numbers to mark the Night of Power, one of the high points of the holy fasting month of Ramadan.

All the injured were treated at the scene and none required admission to hospital, the newspaper cited a health official as saying.

Every year, hundreds of thousands of pilgrims flock to Mecca to carry out the lesser umrah pilgrimage during Ramadan -- especially during its last 10 days.

They include the Night of Power, when the angel Gabriel is believed to have given the Prophet Mohammed the first verses of the Koran.

The incident comes as Saudi authorities continue to unveil new safety measures for this year's hajj in September. The pilgrims suffocated or were trampled to death when two massive crowds converged on a narrow street.

More than 2000 were reported dead in a stampede in last year's Hajj on the outskirts of Mecca, the deadliest such tragedy to strike the annual hajj pilgrimage in nearly a decade. According to figures from foreign officials, at least 2,297 pilgrims died. Saudi Arabia issued a death toll of 769.

Newspapers reported on Friday that, among new security measures, hajj pilgrims this year will have to wear an electronic safety bracelet to store their personal information, including address and medical records.

The hajj and umra pilgrimages bring millions of Muslims to the holy places in Saudi Arabia every year.