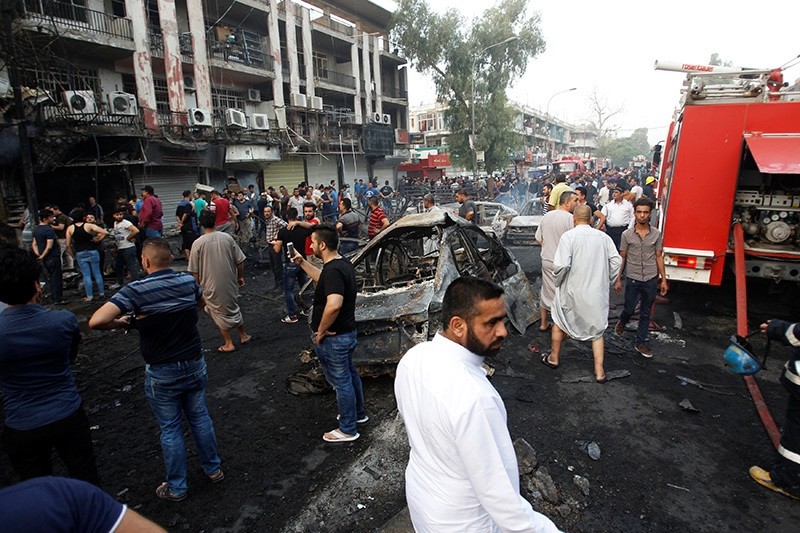 At least 213 people were killed in Sunday's Baghdad suicide bombing claimed by the Daesh terrorist group, officials said, making it one of the deadliest ever militant attacks in Iraq.

The suicide car bombing, which ripped through a crowded shopping area and sparked infernos in nearby buildings, also wounded more than 200 people, security and medical officials told AFP on Monday.

The blast hit the Karada shopping district around midnight on Sunday morning, while the area was packed with shoppers after sundown ahead of this week's holiday marking the end of the Muslim fasting month of Ramadan. It follows a week after Iraqi security forces recaptured the city of Fallujah from DAESH, leaving Mosul as the only Iraqi city under the control of the extremists. The bombing injured more than 130 people, according to security and medical officials. Prime Minister Haider al-Abadi visited the site of the bombing and vowed "punishment" for its perpetrators, his office said.

The attack set buildings in the area ablaze, reducing some to charred hulks and also torching shops. Men carried the bodies of two victims out of one burned building, and a crowd of people looked on from the rubble-filled street as firefighters worked at the site.

DAESH issued a statement claiming responsibility for the suicide car bombing, saying it was carried out by an Iraqi as part of the group's "ongoing security operations." The terrorist organization said the bombing targeted members of Iraq's Shiite Muslim majority. Bombings in the capital decreased since DAESH overran large areas north and west of Baghdad in June 2014, apparently because the extremists were occupied with operations elsewhere. But the group has struck back against Iraqi civilians after suffering military setbacks, both as revenge and to portray itself as being on the offensive.

In May, the capital was rocked by a series of blasts that killed more than 150 people in seven days. With thousands of vehicles moving in and out of the city each day, such bombings are difficult to prevent. But there are also flaws in Iraqi security measures in the city, especially the continued use of fake bomb detectors at checkpoints in the city years after the man who sold them to Iraq was jailed for fraud in Britain. A video posted on social media Sunday showed men – apparently angry at the government's failure to prevent the attack – throwing rocks at what was said to be Abadi's convoy.

Iraqi forces launched an operation in May to recapture the city, one of only two in the country then held by DAESH. The defeat was compounded by a devastating series of air strikes targeting extremist forces as they sought to flee the Fallujah area.

With Fallujah retaken, Iraqi forces are now setting their sights on Mosul, the last major population center in Iraq held by DAESH. Initial operations aimed at setting the stage for a final assault on the city have begun, and the U.S.-led coalition is carrying out strikes in the area.

The Pentagon announced on Friday that the coalition had killed two senior DAESH leaders in the Mosul area the week before.

In addition to Mosul, DAESH still holds significant territory in Nineveh province, of which it is the capital, as well as areas in Kirkuk to its west and Anbar to its south. The extremist group seized control of large parts of Iraq and Syria in mid-2014, committing widespread atrocities and organizing or inspiring a series of deadly attacks in Western cities and across the Middle East.