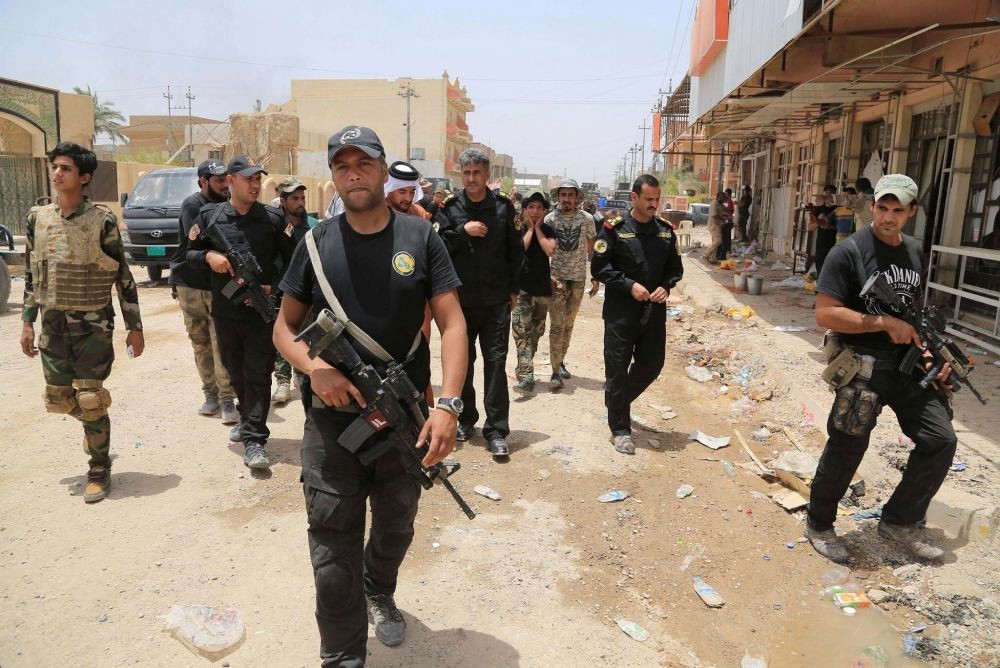 Fallujah residents claim that the Shiite militias arbitrarily attack, detain and loot the goods of Sunnis.
by Compiled from Wire Services Jul 05, 2016 12:00 am

A highway overpass in central Fallujah, from which DAESH militants hanged a captured Iraqi soldier last year, bears the marks of the city's latest victors, including a slogan scrawled in green spray paint: "The state of (Imam) Hussein remains." The overtly Shiite phrase, which appears to mimic DAESH's own "Remain and Extend" motto, was left a week ago by one of the Shiite militiamen who helped drive DAESH from the Sunni city it captured in January 2014. With combat over, the militias are staying on, brushing up against army, police and counter-terrorism forces which have each staked out positions across Fallujah, heavily damaged by the fighting and now almost completely empty. The militias' continued presence in Fallujah and their pledges to remain for an undefined period of time raise the possibility that nearly 300,000 displaced Sunnis may not feel safe returning home anytime soon. Keen to avoid a repeat of systematic looting, blamed on militias, after the recovery of cities like Tikrit and Baiji last year, regular government forces and militia leaders themselves say they have managed to limit abuses in Fallujah to a few isolated cases. The government said it had arrested several perpetrators, including those suspected in the summary execution of dozens of fleeing residents. But government efforts to keep the militias to outlying areas of Fallujah have failed, part of continuing tensions over the Popular Mobilisation Forces (PMF), a coalition of mostly Shiite militias that report to Iraq's Shiite Prime Minister Haider al-Abadi but are trained and armed by Iran. Sunni politicians say what happened in Fallujah shows the militias should be completely barred from a planned offensive on Mosul, the most important DAESH bastion remaining in Iraq which the authorities want to retake this year.

Before the military assault began on May 23, Iraqi officials had said the militias would be kept outside Fallujah for fear of aggravating sectarian tensions with Sunni residents. The militias initially indicated they would cooperate. But by mid-June, their fighters appeared on the battlefield and commanders bragged about their important contributions. Prime Minister Abadi later praised their role in the offensive, which was declared over on June 26. A government spokesman said the forces deployed in Fallujah are clearing it from mines and explosives and restoring basic services so that the population can return under the supervision of the local police that will take over the city. "When the city is secured, the forces will leave," he said, referring to the units that don't belong to the city, without mentioning specifically the Shiite paramilitary. "Popular Mobilization is part of the security forces and they are taking part in the military operations according to the plan set by the commander in chief of the armed forces," the spokesman added, referring to Abadi.

The militias were still present last week during several Reuters visits to Fallujah, where plumes of dark black smoke billowed into the sky. Two sources from the elite counter-terrorism service (CTS) said looting and arson had followed the end of combat. One of them blamed the PMF and showed Reuters three militiamen caught in the act. At least two white pick-up trucks inside Fallujah on Thursday were carrying what appeared to be washing machines and other home appliances, covered with blankets, but Reuters could not verify they had been stolen. Many roads in the zone controlled by CTS have been blocked off with rubble and burnt-out cars. The second source said the barriers, which went up after DAESH was routed, were meant to block other Iraqi forces. "We do that to prevent any looting or violations in our area of operations," he said. Security forces prevented a Reuters team touring Fallujah on Thursday from approaching a large fire in a western district overlooking the Euphrates river. Such fires were set by DAESH militants to provide cover from airstrikes as they fled, many officials say, but some acknowledged pro-government forces are also partly to blame. A spokesman for the Badr Organization, one of the largest PMF factions, denounced the acts as isolated incidents. "The (Popular) Mobilization refuses these acts and will punish all those who those proven to have committed them," said Karim al-Nuri, adding that four or five PMF members had already been arrested.

Abu Mahdi al-Mohandis, one of the PMF leaders and head of Kataib Hezbollah, a constituent militia, last week pledged his fighters would not leave their positions inside Fallujah. "The (Popular) Mobilization will continue to hold its ground in every area. The armed forces still need the Popular Mobilization," he said in an interview posted online on June 26. Nuri, the Badr spokesman, said the PMF would leave "as soon as security returns", but could not specify how long that might take. The militias have remained in many other areas retaken from DAESH, including predominately Sunni cities like Tikrit and Samarra. Given Fallujah's record of militancy, the threat of DAESH attempting to return is not unrealistic but a long-term presence of Shiite forces could prove destabilizing. The city emerged as the main bastion of the insurgency after the U.S.-led invasion in 2003 and swiftly became an al-Qaida stronghold. U.S. forces that toppled Saddam Hussein suffered heavy losses there in two battles in 2004. More than a decade later, Fallujah is seen by many Iraqis as an irredeemable bulwark of unrest.

The special forces commander overseeing the Fallujah operation, Lt. Gen. Abdul Wahab al-Saadi, declined to comment on these sightings. But he said the symbolic value of the city for both Iraqis and DAESH militants made the liberation of Fallujah an especially sensitive operation. The highway overpass, in particular, has become emblematic of Fallujah's turbulent recent history. A year ago, it was the scene of the brutal killing of an Iraqi soldier by DAESH. Images released by the militants show Mustafa a-Athari, a Shiite from Sadr City, being paraded through town before he was hanged from the overpass as crowds of residents cheered. Al-Athari was quickly upheld as a martyr, and Iraqi militia leaders pledged to avenge his death, calling on the government to allow them to launch an operation to retake Fallujah. The powerful Iraqi Shiite militia, Asaib Ahl al-Haq, pledged to "crush the skulls" of those responsible. The event echoed an incident more than 10 years earlier, when an angry mob hanged four American security contractors from a bridge just half a mile (about one kilometer) from the site of al-Athari's murder. The 2004 public killing of the Americans became an iconic image that changed the U.S. public's perception of the Iraq war and preceded a brutal U.S. military response. Thousands of Iraqis and 153 American troops were killed and large parts of Fallujah were virtually leveled. "This is the city in which some of the worst crimes against humanity have occurred," said al-Saadi, the special forces commander. "It began with the killing of the Americans and continued with the murder of al-Athari."
RELATED TOPICS