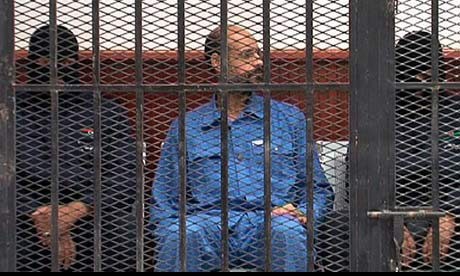 The fate of Saif al-Islam al-Gaddafi, son of late Libyan strongman Muammar Gaddafi, remains shrouded in mystery after a death sentence -- handed down against him by a Libyan court -- was squashed.

Last year, Saif al-Islam, 44, was sentenced to death for war crimes by a Tripoli court in a mass trial of former regime officials.

His lawyer, Karim Khan, said last week that the death sentence against his client had been squashed under an amnesty law issued by Libya's new UN-backed unity government.

Saif al-Islam was held at an undisclosed location after being released from house arrest in western Libya's town of Zintan -- home to one of Libya's most powerful militias -- where he had been held since 2011.

In a Friday statement, the municipal and military councils of Zintan revolutionaries said Gaddafi's son was still in prison and had not been released.

However, Al-Ajami al-Atiri, the commander of a battalion stationed at the prison where Saif al-Islam is reportedly being held, insisted the amnesty against Gaddafi's son had been carried out.

He, however, declined to confirm whether Saif al-Islam had in fact been released.

"This is a security issue that we cannot talk about," he told Anadolu Agency.

A tribal source in Zintan confirmed to Anadolu Agency that Saif al-Islam had been "officially" and "legally" released.

"He is now in the custody of the military, municipal and tribal councils in Zintan," the source said anonymously due to restrictions on speaking to media.

The source, however, ruled out the notion that Gaddafi's son would soon be released.

"He has no place to go inside Libya," he said.

According to the source, Saif al-Islam still faces charges of crimes against humanity issued by the International Criminal Court (ICC) at The Hague.

During Gaddafi's rule, Saif al-Islam had been his heir apparent. When the uprising against Gaddafi broke out in 2011, he returned to Tripoli to support his father.

After Gaddafi was killed in August of 2011, Saif al-Islam was captured in the Sahara Desert while trying to flee to Niger.

In 2014, he was put on trial for war crimes and sentenced to death, but human rights groups and the UN said there was a lack of due process at his trial.

Mahmoud al-Hatweesh, a spokesman for the Zintan military council, said the current whereabouts of Saif al-Islam were unknown.

"We don't know where he is being held, but he is still in prison," he told Anadolu Agency.

He went on to assert that the amnesty did not apply to Gaddafi's son.

"The amnesty does not apply to Saif al-Islam since he still faces other charges on which the court has yet to rule," he said.

Al-Hatweesh lamented that the ongoing controversy regarding Saif al-Islam's fate was raising concerns about a conflict between various authorities in Libya.

"This is because the amnesty was issued by the executive authority without consulting any judicial bodies," he said.

A document circulated on social-media websites purportedly from Libya's Justice Ministry stated that Saif al-Islam had been released after appeals were made by senior members of the Gaddafi tribe.

The Justice Ministry, however, has since said the document was unauthentic and full of "legal mistakes".

Al-Hatweesh said a group of Libyans in Zintan were opposed to Saif al-Islam's release, in reference to the city's powerful militia.

"I don't think any tribe would be able to welcome Saif al-Islam," the spokesman said.

"No one can guarantee Saif al-Islam's safety outside Zintan -- even his own tribe," he added.

Since the 2011 uprising, the Gaddafi family has been largely dispersed across the globe.

Two of Gaddafi's sons, Khamis and Mutassim, were killed in the uprising, while their brothers, Hannibal and Mohamed, along with their sisters, Aisha and Hanna, and their mother, Safiya, have all fled to Algeria or Egypt.

Another one of Gaddafi's sons, Saadi, is currently jailed in Tripoli, where he faces charges of war crimes.

Speculation is now rife that Saif al-Islam could be sent to neighboring Egypt.

A source in Saif al-Islam's family told Anadolu Agency that talks were currently underway between security officials in both Egypt and Zintan to discuss the possibility of transferring Gaddafi's son to Cairo.

No details, however, are yet available regarding the outcome of these talks.

"A high-level Egyptian delegation is currently in Libya to follow up on the issue," the source, who is based in Cairo, said.

The source, however, said the talks were currently facing difficulties, declining to elaborate further.

An Egyptian official, however, denied that any such talks were taking place between Egypt and Libya regarding Saif al-Islam's fate.

"This is due to the current political chaos in Libya and Egypt's unwillingness to engage in an issue that has international ramifications," he said, referring to the ICC charges against Saif al-Islam.

The official spoke on condition of anonymity because he was unauthorized to speak to the media.

The Egyptian capital is currently home to Ahmed Gaddafi al-Dam, a cousin of the former Libyan leader.

Al-Hatweesh, for his part, declined to confirm or deny whether any Egyptian delegations had visited Libya.

"The Saif al-Islam issue will be decided by the Libyan people; he cannot be moved anywhere else," he said.

"The city has rejected proposals made by a number of countries to take in Saif al-Islam," he said.

Since Gaddafi's ouster, Libya has been torn by chaos and violence. The country's stark political divisions have yielded two rival seats of government -- one in Tobruk and another in capital Tripoli -- each of which boasts its own legislative assembly and military capacity.

Earlier this week, members of the new unity government moved into their official headquarters in capital Tripoli.