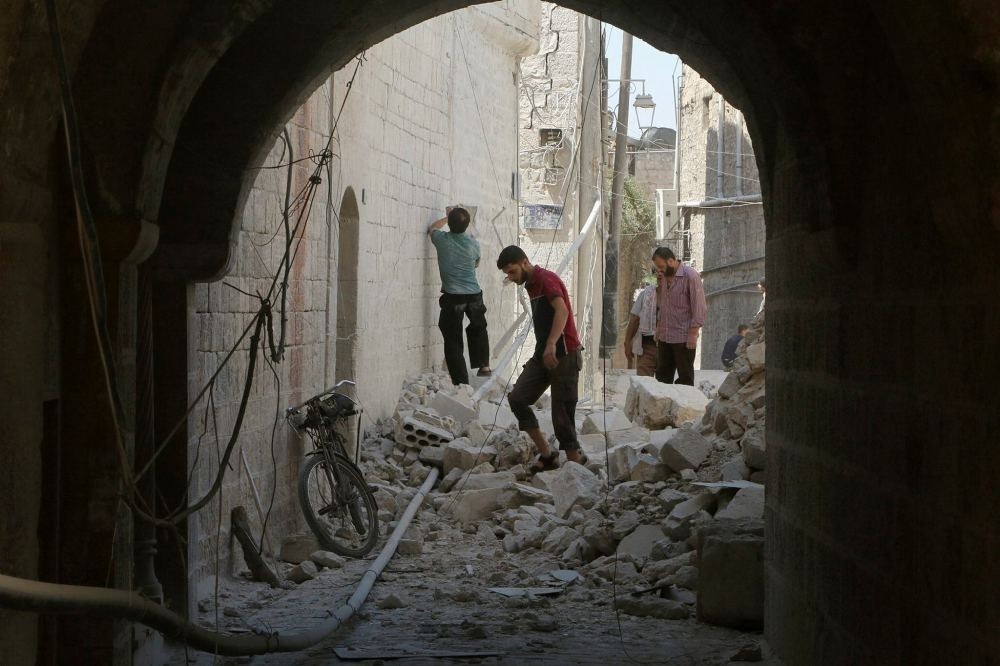 Residents inspect their damaged homes after an airstrike on the opposition-held part of Aleppo.
by Compiled from Wire Services Aug 17, 2016 12:00 am

For the first time Russia started using Iran's military bases to hit DAESH and opposition groups to help the regime make advances in Aleppo.Rights groups have accused Moscow and Damascus of using incendiary weapons on civilians

Russian warplanes took off on Tuesday from a base in Iran to target DAESH and opposition fighters in Syria, Russia's Defense Ministry said, widening Moscow's bombing campaign in Syria in a major development in the country's civil war. The long-range bombers took off from near the Iranian city of Hamedan, around 280 kilometers southwest of the Iranian capital, and struck targets in three provinces in northern and eastern Syria. Meanwhile, Syrian opposition activists said a wave of airstrikes on opposition-held parts of the northern city of Aleppo killed at least 15 civilians and wounded many others on Tuesday, but it was not clear whether the strikes were carried out by the Russian or Syrian government's air force.

It is virtually unheard of in Iran's recent history to allow a foreign power to use one of its bases to stage attacks from. Russia has also never used the territory of another country in the Middle East for its operations inside Syria, where it has been carrying out an aerial campaign in support of Syria's Bashar Assad's government for nearly a year. The announcement suggests cooperation on the highest levels between Moscow and Tehran, both key allies of the embattled president. It comes a day after Russia's defense minister said Moscow and Washington are edging closer to an agreement on Syria that would help defuse the situation in the besieged northern city of Aleppo. Russian Defense Minister Sergei Shoigu said the agreement would "allow us to find common ground and start fighting together for bringing peace to that territory," adding that Russian representatives are "in a very active stage of talks with our American colleagues."

A U.S. official said, however, that discussions with the Russians are still ongoing and no agreement is close. The official spoke on condition of anonymity because he was not authorized to talk to the media about the ongoing talks. Russia and the United States have been discussing greater coordination for striking extremists in Syria, but they have been unable to reach agreement on which militant groups could be targeted.

Russia has criticized what it describes as U.S. reluctance to persuade the Syrian opposition groups it supports to withdraw from areas controlled by al-Qaida's branch in Syria. In Tehran, the state-run IRNA news agency quoted Ali Shamkhani, the secretary of Iran's Supreme National Security Council, as saying that Tehran and Moscow have exchanged "capacity and possibilities" in the fight against DAESH. "With constructive and extended cooperation between Iran, Russia and Syria and the resistance front (Hezbollah), the situation has become very tough for terrorists and the trend will continue until the complete destruction of them," Shamkhani said. Russia and Iran have been expanding their ties in the past months after most of the sanctions against Iran were lifted following the nuclear deal with world powers that put restricted Iran's nuclear program from weapons-grade capability. A top Russian lawmaker, Adm. Vladimir Komoyedov, said Russia's decision to use a base in Iran will help to cut costs, which is "paramount right now."

The Russian ministry's statement issued said Su-34 and Tu-22M3 bombers took off earlier in the day to target DAESH and the Nusra Front militants in Aleppo, as well as in Deir el-Zour and Idlib, destroying five major ammunition depots, training camps and three command posts. The Russian Defense Ministry released a video showing a Russian Tu-22M3 long-range bomber dropping bombs in strikes described as "terrorist objects in Syria." The nearest air base to Hamedan is Shahid Nojeh Air Base, some 50 kilometers north of the city. The base has seen Russian aircraft land there before. A report in December by the American Enterprise Institute, based off satellite imagery, suggested the air base saw a Russian Su-34 "Fullback" strike fighter land there in late November. It said a Russian Il-76 "Candid" transport plane also landed there around the same time before both took off, suggesting the Su-34 may have suffered a mechanical issue. The report described the air base as "quite large with a 4,572-meter runway, extensive taxiways and multiple hangars and bunkers, all seemingly in good repair." It said it is "ideal for providing covert ground support to Russian combat missions."

Iran's constitution, ratified after its 1979 Islamic Revolution, bans the establishment of any foreign military base in the country. However, nothing bars Iranian officials from allowing foreign countries to use an airfield. The announcement from Russia marks the first significant stationing of its troops there since World War II, when allied British and Soviet forces invaded Iran to secure oil fields and keep Allied supply lines open. Russia says its bombing campaign in Syria is focused on extremist groups but it has frequently struck other, including more moderate opposition groups fighting Assad's forces. Last week, Russian bombers launched a wave of airstrikes on the city of Raqqa, the DAESH's de factor capital in northern Syria, killing at least 20 civilians according to Syrian opposition activists.