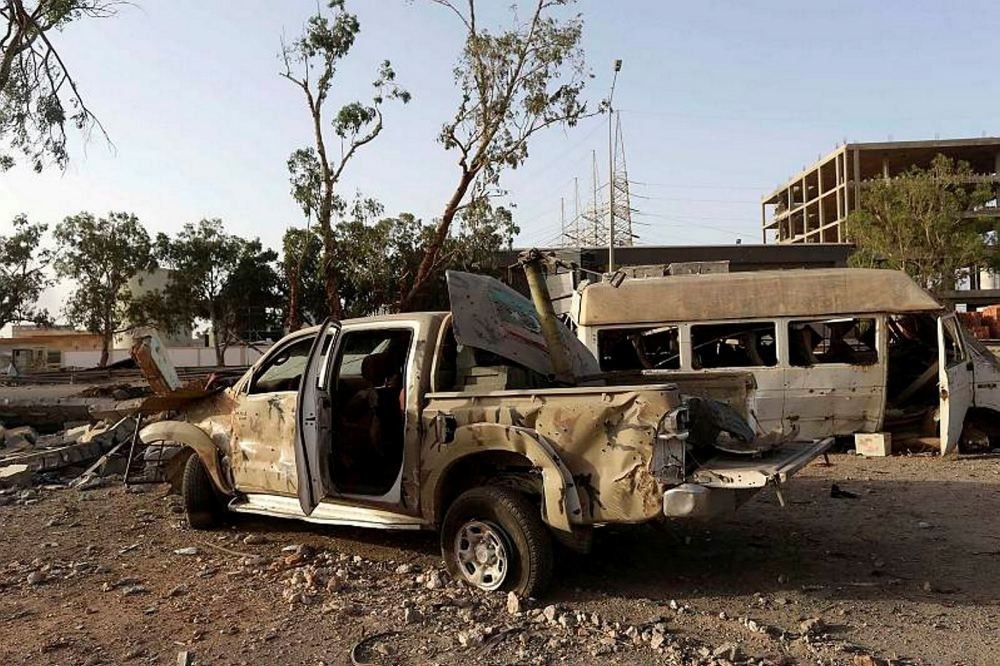 Destroyed vehicles were seen after fighting between rivals in the eastern city of Benghazi.
by Daily Sabah with Wires Sep 15, 2016 12:00 am

Britain and France are now being held accountable for creating a failed state in Libya, the oil-rich North African country, revealing that Western meddling only makes matters immeasurably worse

The British and French governments have been sharply criticized for pursuing an "opportunist policy of regime change" that led to the "political and economic collapse" of Libya in a key British parliamentary committee report released on yesterday.

Former Prime Minister David Cameron's 2011 decision, along with his French counterpart, Nicolas Sarkozy to intervene militarily in Libya was misguided and helped give rise to DAESH in North Africa, the report stated. The harsh report slams Cameron and his National Security Council for expanding a civilian protection mission in Libya to include regime change and failing to adequately plan for the country's future after the ouster and subsequent killing of the strongman Muammar Gaddafi in 2011.

The parliamentary report stated the failure to plan for the aftermath led to political collapse, internal warfare, a humanitarian crisis and the rise of the DAESH — a criticism similar to the findings of an earlier official inquiry, known as the Chilcot Report, into Britain's role in the invasion of Iraq and its aftermath.

The U.S. President Barack Obama earlier blamed British Prime Minister David Cameron and other European allies for creating the mass in Libya as he called the situation as the "shit show."

France and Britain led an international coalition in a series of airstrikes against Gadhafi in March 2011. The oil-rich North African country descended into chaos after the Western intervention and parts of it have become a bastion for DAESH, giving the militants a new base even as its territory in Syria and Iraq shrinks under constant assault.

The head of Libya's U.N.-backed unity government called for urgent talks Wednesday after forces loyal to a rival administration seized the main eastern oil ports in defiance of world powers. Haftar's forces on Sunday claimed to have seized full control of the Ras Lanuf and Sidra oil ports in eastern al-Bayda city from a militia loyal to the Tripoli-based government, the General National Congress. The Ras Lanuf and Sidra oilfields are estimated to account for more than half of Libya's oil production.

The capture of the oil crescent means that the rival administration now controls virtually the entire eastern Cyrenaica region. The seizure of all four export terminals in the so-called oil crescent was a major blow to Prime Minister Fayez al-Sarraj's government, which is almost entirely dependent on oil revenues for its income. The writ of Sarraj's government is confined to the western Tripolitania region where its forces have been battling DAESH in the coastal city of Sirte for months.

Along with the United States and the E.U. countries, Turkey issued a statement condemning Haftar's offensive while calling the attack as "a brazen assault on national sovereignty."

Sarraj said that Libya was at a "turning point" after the assault on the oil ports with its future as a united nation in serious question. "I call on all sides to halt provocative actions and sit down urgently at the same table to discuss a mechanism that would enable us to get out of this crisis and put a stop to the conflict," he stated. "I am not prepared to rule one part of Libya nor to lead a war against another part."

Libya has suffered from a chronic absence of security as various actors have emerged. There are two centers of power in the crisis- hit country; the internationally recognized government in Tobruk, the Government of National Accord (GNA) and Tripoli-based General National Congress (GNC). The GNA is the centerpiece of U.N. efforts to end five years of chaos in Libya and it now faces an even tougher battle to assert its authority over the rival administration in the east.

The powerlessness of the central government has led many people to take up arms against the government. After the ouster and subsequent killing of the strongman Muammar Gaddafi in 2011, the army has disintegrated, and the central government has gradually lost its power without having much effect on the ongoing violent clashes between armed forces loyal to General Khalifa Haftar. State security forces have also failed to protect the government, leaving the country unprotected and open to heavy clashes between rival militias trying to gain authority over the government and the country. Peace and political stability seems far off as no rival militias have been strong enough to put an end to the ongoing war.
Last Update: Sep 15, 2016 1:02 am
RELATED TOPICS