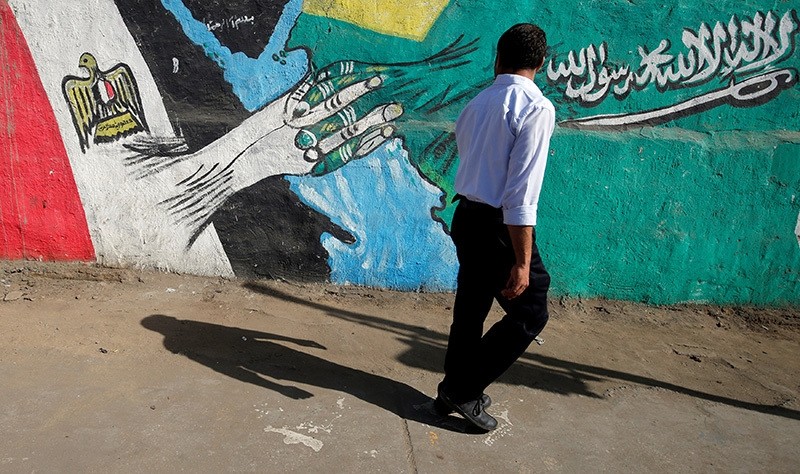 While the rift between Arab powerhouses Egypt and Saudi Arabia deepens amid differences on regional issues, the Saudi envoy to Cairo suddenly left the country and departed for Riyadh late on Wednesday.

Ambassador Ahmed Qatan's abrupt departure from Cairo comes days after Egypt backed Russia's UN Security Council resolution on Syria instead of the one drafted by France, which was backed by Saudi Arabia. Although Qatan is reported to have left for Riyadh for a three-day visit, the timing of his departure comes as tensions rise between the two countries, due to numerous issues.

The two countries are having their first public spat since Egyptian President Abdel-Fattah el-Sissi took office two years ago, a quarrel over Syria that points to a wider, but mostly muted, divergence in the handling of regional issues by Cairo and Riyadh.

Earlier this week, Saudi Arabia's Aramco, the world's largest oil company, informed Cairo it would not ship any fuel this month. The oil-giant agreed in April to provide Egypt with 700,000 tons of fuel monthly for five years on easy repayment terms; the sudden cancelling of shipments has therefore placed Egypt in a very difficult position.

Oil Ministry spokesman Hamdi Abdel-Aziz was quoted by Egyptian newspapers Wednesday as saying that several fuel shipments from other suppliers have arrived in Egypt following "urgent" tenders as a temporary measure to fend off fuel shortages.

There has been no official word from Saudi Arabia on the abrupt halt of shipments.

The two countries have gone to great lengths to shield their differences from the public eye, often emphasizing their closes ties and cooperation. But Egypt's vote in favor of separate Russian and French draft resolutions on Syria at the U.N. Security Council over the weekend has apparently angered the Saudis.

Egypt's U.N. Ambassador Amr Aboulatta, the Arab representative on the council, defended his support for both drafts, saying his country backed all efforts to stop the suffering of the Syrians.

Russia vetoed the French resolution demanding an immediate halt of the bombing by Russia and the Syrian government of rebel-held areas in the northern city of Aleppo.

The Russian draft called for the separation of "moderate" rebel factions from extremists, but made no mention of a halt to the bombing. It was rejected because it failed to get the minimum nine "yes" votes needed for approval by the 15-member council.

Egypt and Saudi Arabia's differences over Syria is rooted in Riyadh's conviction that Bashar Assad must be removed for that country's civil war to end, while Cairo advocates a political process that denies militant groups any role in Syria's future. Riyadh is also opposed to Russia's military intervention in Syria in support of Assad. Under el-Sissi, Cairo, wishing to see Syria's institutions and army emerge unscathed from the conflict, has not publicly spoken against the Assad government or the Russian intervention.

In a rare public rebuke to Egypt, Abdallah Al-Mouallimi, the Saudi U.N. ambassador, denounced Cairo's support for the Russian draft. "It was painful to see that the Senegal and Malaysia positions were closer to the Arab consensus on Syria (when) compared to that of an Arab representative."

Like Egypt, Malaysia and Senegal are non-permanent Security Council members.

"Excuse me, Arab Republic of Egypt, but your vote in favor of the Russian draft in the Security Council made me doubt your motherhood of the Arabs and the world," he wrote on Twitter.

Their comments made the front page of two Cairo dailies on Monday. "The first official Saudi criticism of Cairo," declared the headline of the independent Al-Shorouq's story on the quarrel.

"There is a crisis in relations, but it has long been suppressed," said prominent Egyptian analyst Abdullah el-Sennawy. "But I don't think either side wants to escalate this flare-up over the security Council vote. They realize they both need each other."

Egypt's military announced on Wednesday it will host Russian troops for war games along the Mediterranean coast, the latest step in the two countries' rapprochement and another sign of Moscow flexing its muscles in the Middle East.

The drill, due Oct. 15-26 in the coastal city of El-Alamein and dubbed "Guardians of Friendship," will include "elite units" from both sides. Russia's defense ministry said it would be the first ever joint paratrooper exercise for the two and would involve armor being dropped from planes.

Egypt has increased cooperation with Russia under el-Sissi with several projects, including a preliminary agreement to build a nuclear power plant.

Meanwhile, Russia under President Vladimir Putin has revived its military presence in the region to levels not seen since the Cold War, intervening with an air campaign to shore up Bashar Assad against opposition forces trying to oust him, and the extremist Daish group.

It's unclear how the joint exercises in El-Alamein would be interpreted by Egypt's main backer, the United States, which provides some $1.3 billion in annual military assistance. Egypt still needs several billion dollars in loans as a condition to meet an IMF bailout package to get the economy back on track.

El-Sissi has splashed out on big-ticket military hardware, from naval vessels to advanced fighter jets from the French and Americans. He has largely contained violence on Egypt's mainland, although an insurgency in a far corner of the Sinai Peninsula flared after he led the overthrow of the Muslim Brotherhood's Mohammed Morsi, with a Daish affiliate forming in Sinai.

Soldiers and police officers in Sinai are frequently killed by roadside bombs and snipers in the area, while the army says it kills dozens of militants every month.

The insurgency risked upsetting ties with Russia last October, when Daish militants brought down a Russian passenger plane in Sinai, killing all 224 on board. Russia suspended flights to Egypt and has yet to return them, waiting for better security measures to be implemented first.

Saudi backing after Morsi's ouster did not pay off

Saudi Arabia strongly supported the Egyptian military's ouster in 2013 of the democratically elected president Mohammed Morsi, Egypt's first freely elected but divisive president. It has poured billions of dollars into Egypt to keep its flailing economy afloat. Beside Syria, relations have been jolted by several bumps since King Abdullah died and was replaced in January 2015 by his half-brother Salman.

Riyadh also seemingly expected that Egypt, which routinely talks about its unwavering commitment to the security of its Gulf Arab allies, would commit ground troops as part of a Saudi-led military coalition that intervened last year in Yemen's civil war against Iranian-backed Shiite rebels. But Egypt's commitment has so far been mostly restricted to a limited naval deployment near the southern Red Sea entrance and military advisers in Saudi Arabia.

Egypt has also resisted being drawn to the sectarian rhetoric that defines the rivalry between Sunni Saudi Arabia and Shiite Iran. Moreover, Cairo also maintains channels of communication with Tehran, notwithstanding its occasional and thinly veiled criticism of Iran's growing influence in the region.

Popular opposition in Egypt to a decision by el-Sissi in April to relinquish control of two key Red Sea islands to Saudi Arabia has injected a sour note into relations. The move prompted the largest anti-government protests since el-Sissi took office in 2014 and the constitutionality of his decision on the islands is being contested in a high-profile court case.