Taliban has been using drone technology for 18 months, spokesman says 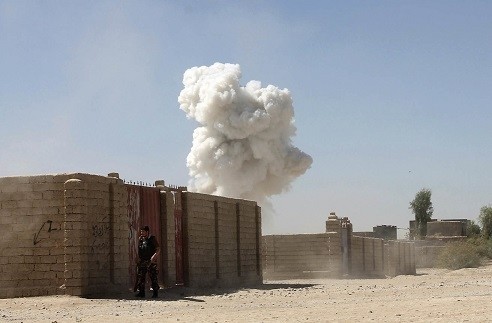 Smoke rises after a suicide attack, killing 10 police officers by Taliban militant in Lashkar Gah the capital of southern Helmand province of Afghanistan, Oct. 10, 2016. (AP Photo)
by Oct 22, 2016 12:00 am

The Taliban has been using drone technology to plan offensives for a period of 18 months, a spokesman said Saturday, a day after the organization released a drone-recorded video of a deadly attack on a police headquarters in Helmand province.

Taliban spokesman Zabihullah Mujahid said the technology plays a vital role in the extremist group's fight against Afghan security forces in the country's north-east and south.

The news comes a day after the Taliban released a drone-recorded video of a bomb attack on a police headquarters in Helmand's Nawa district, which Mujahid said killed police chief Ahmadshah Salim and "scores of others" just over two weeks ago.

Afghanistan's Ministry of Defence said it had been unaware of Taliban's use of drone technology.

In mid-June, the Afghan Interior Minister banned the use of drone cameras for media organizations citing "security concerns."

Helmand is one of the most volatile provinces in southern Afghanistan. All districts are either heavily embattled or fully controlled by Taliban militants. The provincial capital Lashkargah has been under siege for weeks.