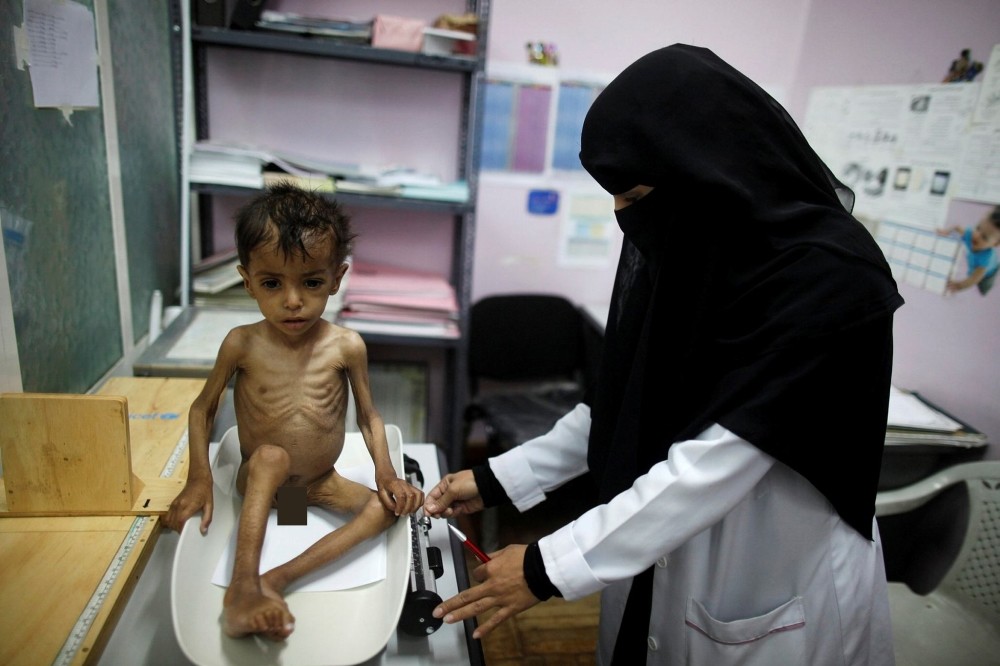 A nurse weighs a malnourished boy at a malnutrition treatment center in Sanaa, Yemen, Oct. 31.
by Compiled from Wire Services Nov 02, 2016 12:00 am

Amid peace efforts by the United Nations to propose a roadmap to resolve the two-year conflict in Yemen, an U.N. official sound the alarm over the crisis, saying that the conflict created a humanitarian disaster

Amid efforts to end 19-months conflict in Yemen, The United Nations' humanitarian chief says that if the warring parties in Yemen do not reach a peace agreement soon, the country could collapse with menacing consequences for the entire region.

Stephen O'Brien told the Security Council on Monday that 80 percent of Yemenis, some 21.2 million people, need some form of humanitarian assistance and over 2 million people, including 370,000 children, are suffering from malnutrition. Complicating matters, the country now has 61 confirmed cases of cholera and 1,700 more suspected cases, O'Brien said.

The UN Special Envoy for Yemen on Monday released details of a proposed "roadmap" to resolve the two-year conflict. In a briefing by Ismail Ould Cheikh Ahmed before a UN Security Council meeting, the envoy said the peace plan envisaged a new vice-president for Yemen and a national unity government. These would lead a transitional period before holding elections. "The roadmap includes establishing military and security committees to be able to oversee the delivery of weapons and the withdrawals from Sanaa, Hodeida and Taiz," Ould Cheikh Ahmed said.

"The military committees are supposed to ensure the end of military violence and to supervise the safety and security of citizens and the institutions of the Yemeni country," he added.

With regard to the political transition, the UN envoy indicated the roadmap addresses different transitional political measures, including the Yemeni presidency. He went on to note that these measures include "the appointment of a new vice-president, formation of a national unity government to lead the transitional period, overseeing the resumption of political dialogue and then holding the elections."

The U.N. envoy confirmed that "these measures are in line with 2216's Security Council resolution and in line also with the initiative of the Gulf Cooperation Council and the outcomes of the national dialogue." "I have been informed that there is a tendency among the Yemeni rivals to reject the roadmap, but this is an indication for the Yemeni political elite's inability to overcome their differences and to put the public interest above anything else," he said.

Ould Cheikh Ahmed suggested "it is time for the Yemeni rivals to realize that no peace could be accomplished without concessions and no security could be attained without agreements".

In April, the internationally-recognized government and the Shiite Houthis rebels entered U.N.-sponsored peace talks in Kuwait which failed to produce a breakthrough, ending in August. Last week, a three-day truce between the warring parties was not extended.
RELATED TOPICS