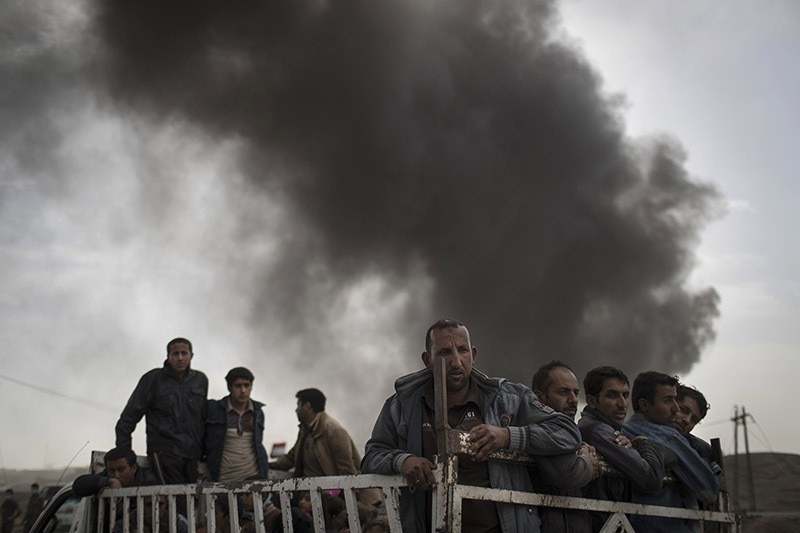 The Daesh terrorist group's leader Abu Bakr al-Baghdadi, who was previously believed to have moved to the group's bastion Raqqa in Syria, is believed to be in Mosul and may face death or capture amid the ongoing operation.

According to an article by British daily the Independent, a senior Kurdish official had information from several sources regarding Baghdadi's whereabouts, and the so-called "caliph" of the group was inside Mosul, which is nearly besieged by the Kurdish peshmerga and Iraqi army forces.

Fuad Hussein, the political and military advisor to the president of the Kurdish Regional Government (KRG) Massoud Barzani, claimed that Baghdadi had no chance of fleeing Mosul.

"Baghdadi is there and, if he is killed, it will mean the collapse of the whole Daesh system," he said.

The article indicated that if Baghdadi was killed, a new "caliph" would have to be chosen by Daesh.

The Iraqi army, police forces and peshmerga - backed by a U.S.-led air coalition - began a wide-ranging operation to retake Mosul, Iraq's second-largest city and capital of the northern Nineveh province 17 days ago.

Since then, dozens of Daesh-held villages on the city's outskirts have fallen before the army onslaught, although the terrorist group remains in control of the city.

After the latest advance of Iraqi forces from the south, the city is now connected to remaining Daesh-controlled areas through a 12-kilometer wide strip, which is tightly monitored by anti-Daesh coalition surveillance and attack aircraft.

Meanwhile on Wednesday, F-16s bombed five Daesh positions in Mosul and approximately 40 other terrorists were injured during the airstrike.

Commander Sami al-Aridi of the Iraqi special forces stated that more than 3,000 civilians including women and children were evacuated from the districts of Karama and Gökçeli and had been temporarily brought to camps.

Al-Aridi also gave information about the operation and confirmed that the Iraqi counter terrorism forces are proceeding to the Karama district of Mosul in order to fully rescue the city.