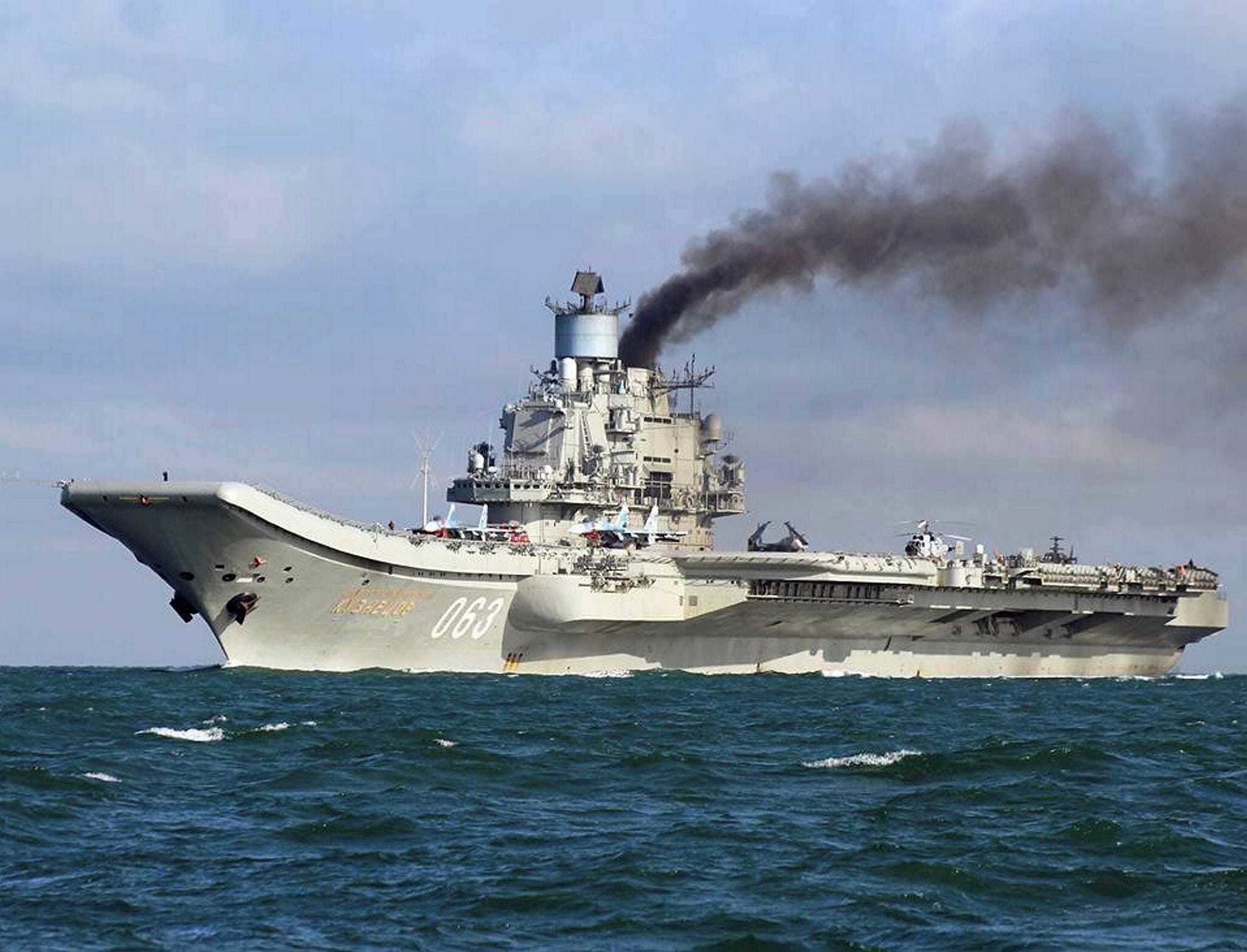 Russian aircraft carrier Admiral Kuznetsov in the English Channel on Oct. 21.
by Daily Sabah with Wires Nov 10, 2016 12:00 am

While all eyes are on Trump's victory in the U.S. elections, Russia's Admiral Kuznetsov aircraft carrier is in the Mediterranean preparing to launch strikes on war-torn Syria

The Russian Defense Ministry has announced that its first ever attack on Syria from an aircraft carrier is to take place imminently. Fighter jets from the Admiral Kuznetsov and heavily armed escort ships are to bomb opposition positions in the beleaguered city of Aleppo.

"The attacks are to hit the long-range approaches to the city," a Defense Ministry spokesman was quoted by the Interfax news agency as saying.

Kremlin spokesman Dmitry Peskov stressed however that there would be no airstrikes directly on the embattled eastern parts of the city.

Russia announced late September that it would send aircraft carrier Admiral Kuznetsov in order to bolster its forces in the eastern Mediterranean off Syria. The vessel reportedly carries MIG-29KR and MIG-29KUBR jets, SU-33 fighters including KA-52K assault helicopters. As well as operating a naval facility in Tartus, Russia runs an air base outside the Syrian coastal city of Latakia, which currently houses warplanes used in its bombing campaign in support of ally Assad. In August, a Russian official said Moscow was planning to expand into a permanent military facility its Hmeimim air base, which already has an S-400 air defence system, its most modern equipment.

Russia's aircraft carries intensified tension with NATO countries. The Russian aircraft carrier Admiral Kuznetsov and a task group of support vessels have steamed through the North Sea and English Channel in recent days heading to the Mediterranean Sea. Russia withdrew its request to refuel in Spain a fleet of Russian warships, amid pressure from Britain and NATO who raised concerns that the ships could be used to ramp up air attacks in Syria. Britain piled diplomatic pressure on NATO ally Spain earlier Wednesday, expressing concern that Madrid was considering refueling the warships.

The Russian Defense Ministry said early October that the two ships had left their Black Sea naval base to join Russia's naval force in the Mediterranean. The Buyan-class corvettes are armed with nuclear-capable Kalibr cruise missiles, known by the NATO codename Sizzler, which the Russian military says have a range of at least 1,500 kilometers (932.06 miles). Though variants of the missile are capable of carrying nuclear warheads, the ships are believed to be carrying conventional warheads.

Syria's second biggest city, Aleppo, has become the top strategic point that will determine Syria's fate, as opposition groups in and around Aleppo launched a counter-offensive to try and break Assad's suffocating siege off Aleppo's eastern-held neighborhoods for several weeks.

The area has been subjected to a ferocious campaign of aerial attacks by Russian and Syrian regime warplanes, and hundreds of people have been killed in recent weeks according to opposition activists and trapped residents.

Aleppo is the focal point of the six-year war in Syria. Assad has said he is determined to retake the country's largest city and former commercial capital. The Assad forces have maintained a siege on the opposition-held eastern quarters since September. The U.N. estimates 275,000 people are trapped inside with dwindling supplies of food and medicine.

More than a quarter of a million people have been killed and more than 10 million displaced across the war-battered country, according to the .UN. However, the Syrian Center for Policy Research, a Beirut-based nongovernmental organization, puts the death toll from the five-year conflict at more than 470,000.
RELATED TOPICS