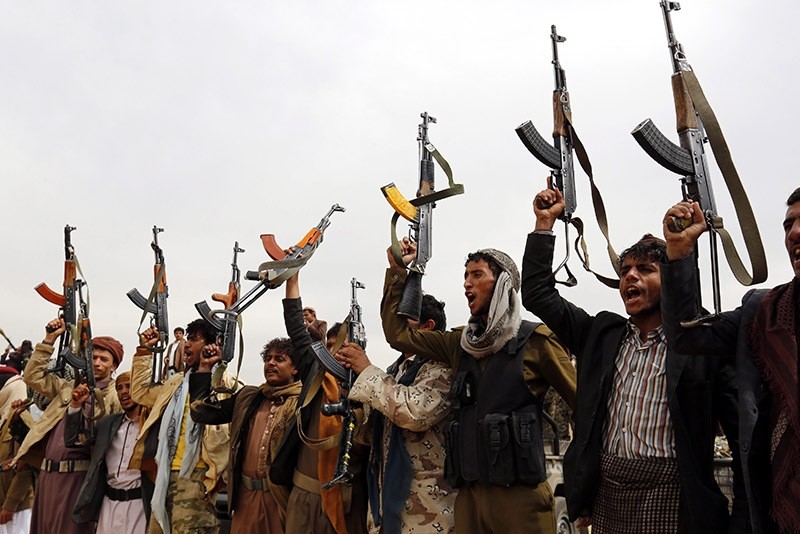 Houthi supporters shout slogans and brandish weapons during a gathering to mobilize more fighters into several battlefronts, in Sana'a, Yemen, on Nov. 10 2016. (EPA Photo)
by Nov 17, 2016 12:00 am

Human Rights Watch accused Yemeni rebels on Thursday of arbitrarily detaining, torturing and forcibly disappearing opponents since they overran the capital in September 2014.

The group said it had documented two deaths in custody and 11 cases of alleged torture, one of of a child.

It said they were among hundreds of reported cases of arbitrary detention by the Shiite Huthi rebels and their allies -- renegade troops loyal to ousted strongman Ali Abdullah Saleh.

The rebels are battling government forces who are backed by a Saudi-led coalition, which intervened in March 2015 when President Abedrabbo Mansour Hadi fled into exile.

"The authorities (in Sanaa) should free those wrongfully held immediately, end detention without access to lawyers or family members, and prosecute officials responsible for mistreatment," HRW said.

"The conflict with the Saudi Arabia-led coalition provides no justification for torture and 'disappearance' of perceived opponents," it added.

The United Nations says more than 7,000 people have been killed and nearly 37,000 wounded since the coalition intervention started. Millions more are in desperate need of aid.