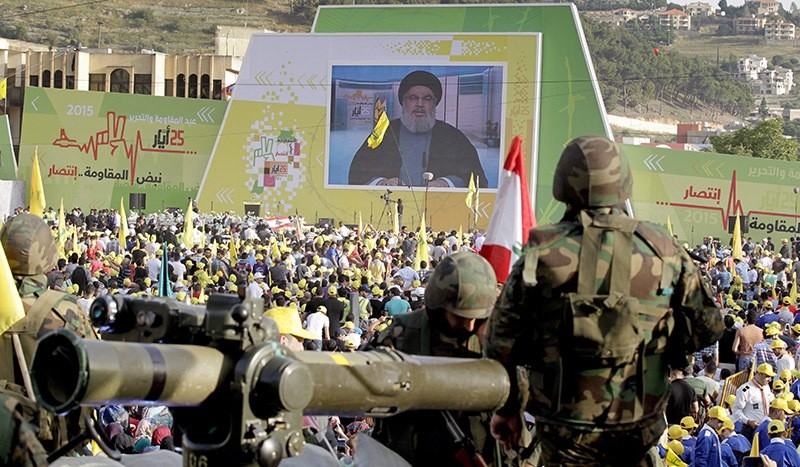 Hezbollah supporters listening to a speech by leader Hassan Nasrallah (on screen), as he delivers a speech on May 25, 2015 to celebrate the 15th anniversary of the Israeli withdrawal from south Lebanon. (EPA Photo)
by reuters Nov 23, 2016 12:00 am

In a letter to the United Nations Security Council on Tuesday, Israeli U.N. Ambassador Danny Danon accused Iran of using airlines such as Mahan Air. The U.S. has sanctioned the Iranian carrier for providing services to the Quds Force, a special forces unit of the IRGC, as well as Hezbollah.

Iran's mission to the United Nations and Mahar Air were not immediately available to comment on the accusations.

Danon's letter to the 15-member Security Council, seen by Reuters, did not offer any evidence to support his accusations.

The charge may add fuel to the debate about the agreement among Iran, the U.S. and five other nations to remove some of the economic sanctions on Tehran in exchange for restraints on the country's alleged nuclear weapons program.

U.N. Security Council missile restrictions and an arms embargo on Iran are not technically part of the nuclear agreement.

U.S. President-elect Donald Trump and several of his national security appointees have criticized the nuclear deal and charged that it does not do enough to halt Iran's support for terrorism.

"Stop all engines on this nuclear deal. Take a step back. Really take a deep-dive look at everything going on in the Middle East," former Defense Intelligence Agency head Michael Flynn, Trump's choice for national security adviser, said in a Fox News interview in March.