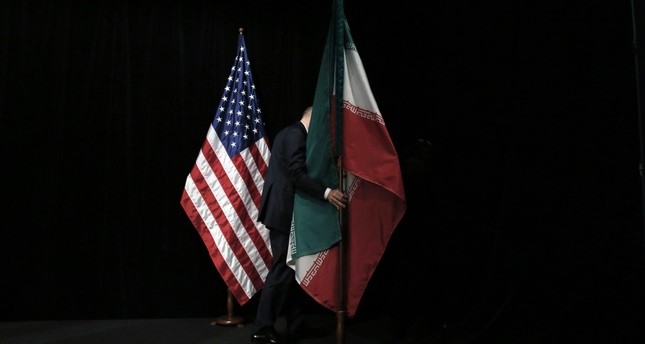 A staff member removes the Iranian flag from the stage after a group picture with foreign ministers and representatives of United States and P5 countries has taken during the Iran nuclear talks at the Vienna International Center in Vienna.
by Anadolu Agency Nov 23, 2016 12:00 am

Republican lawmakers on Tuesday pressed President Barack Obama to refrain from increasing economic ties with Iran before he leaves office in January.

"We urge you not to take any action that would weaken United States or multilateral sanctions or other restrictions against Iran in this post-election period," they said in a letter written by House Speaker Paul Ryan and other leaders in the House or Representatives. They called on Obama to "take no further actions designed to bolster international investment in Iran".

The team added that Obama owed President-elect Donald Trump the opportunity to assess the U.S. policy toward Iran. They also blamed Obama for not having imposed or implemented "additional measures" against Tehran that could result in complicating the incoming U.S. administration's ability to develop its own policy.

The letter comes after the Wall Street Journal reported that Netherlands-based Airbus Group SE received U.S. government support for an export of more than 100 commercial vehicles to Iran.

The report said the export license was granted by the Treasury Department's Office of Foreign Assets Control, that could allow Airbus to deliver "more than $20 billion in jets to Iran Air".

The sale is important as it could challenge Trump to reverse the nuclear deal signed between world powers, including the U.S., and Iran, to curb Tehran's nuclear activities in exchange for some economic sanctions relief.

Trump has said the nuclear deal was a bad one.

The White House said the Obama administration would fulfill its obligations under the deal and there would not be any changes to the enforcement of it.

The State Department said the U.S. had "no Machiavellian intent here to sort of push in any way outside the bounds of our normal commitments and obligations here in the final months of the administration".