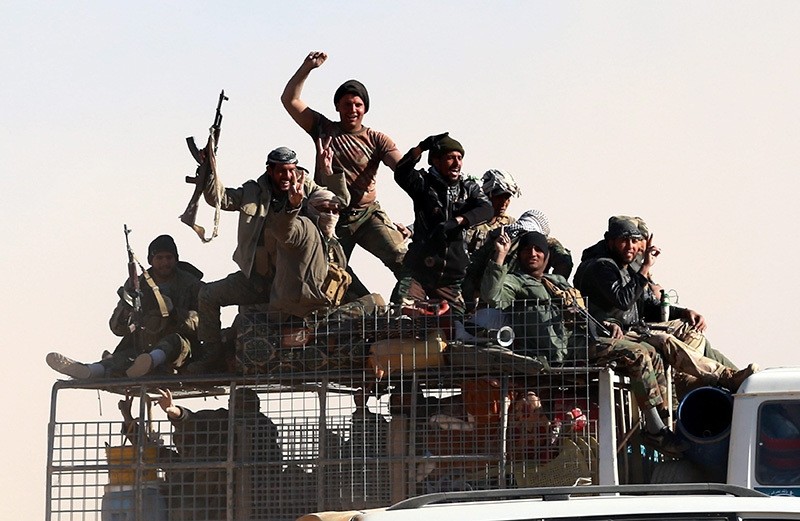 Members of Iraqi Shiite Badr Army militia on their way to take part in a military operation near Tal Afar military airport, northern Iraq on Nov. 20, 2016. (EPA Photo)
by Daily Sabah with AP
Nov 26, 2016 12:00 am

Despite the opposition of Sunni lawmakers and other regional forces, Iraq's parliament on Saturday voted to accord full legal status to government-sanctioned Shiite Hashd al-Shaabi militias (Popular Mobilization Forces – PMF) as a "back-up and reserve" force for the military and police and empower them to "deter" security and terror threats facing the country.

The law placed the militias under the command of Shiite Prime Minister Haider al-Abadi and gave militiamen salaries and pensions that mirror those of the military and the police. In a statement, al-Abadi welcomed the legislation and said the "Popular Mobilization" forces, the formal name of the militias, would cover all Iraqi sects, a thinly veiled reference to the much smaller and weaker Sunni tribal forces. The Shiite militias number more than 100,000.

"The Popular Mobilization will represent and defend all Iraqis wherever they are," al-Abadi said.

The legislation was promptly rejected by Sunni Arab lawmakers who said it was evidence of what they called the "dictatorship" of the country's Shiite majority.

"The majority does not have the right to determine the fate of everyone else," senior Sunni lawmaker Osama al-Nujaifi told a news conference after the vote. "There should be genuine political inclusion. This law must be revised."

Another Sunni lawmaker, Ahmed al-Masary, said the legislation fuels doubts about the participation of all Iraqi communities in the political process. "The legislation aborts nation building," he said.

The vote comes at a time when the government is waging a major campaign to dislodge the Daesh group from Mosul, Iraq's second largest city and the last major urban center still controlled by the extremist group.

The Shiite militias are taking part in the operation's goal to clear predominantly Turkmen town of Tal Afar, located some 60 kilometers west of Mosul. The town is the only major settlement between Mosul and Daesh's bastion Raqqa in Syria, and its capture would block Daesh militants to retreat west from Mosul and bringing in reinforcements for the defense of the city.

Currently, the militias are tasked with driving Daesh from the town of Tal Afar west of Mosul. They seized the town's airstrip earlier this week. Al-Abadi met militia commanders at the strip on Thursday.

Turkey have repeatedly warned against the inclusion of PMF militia in operations in northwestern Iraq -- where the vast majority of the population are Sunni Arabs, Turkmens and Kurds, in addition to Shiite Turkmens and Yazidis -- stating that it may trigger sectarian and ethnic violence.

Turkey is located some 80 kilometers north of the town, and Turkish troops are currently stationed in a training camp near the village of Bashiqa, located 20 kilometers northeast of Mosul in Kurdistan Regional Government (KRG) controlled territory. Turkey also has significant military presence elsewhere in KRG territory for training, intelligence and coordination purposes.

The Shiite militias, most of which are backed by neighboring Iran, have been bankrolled and equipped by the government since shortly after Daesh swept across much of northern and western Iraq in 2014. Many of these groups existed long before Daesh emerged, fighting American troops in major street battles during the U.S. military presence in Iraq between 2003 and 2011.

They have played a key role in checking the advance of Daesh on Baghdad and the Shiite Shrine cities of Samarra and Karbala in the summer of 2014 and later helped liberate Daesh-held areas to the south, northeast and north of Baghdad, standing in for the security forces which largely collapsed in the face of the Daesh blitz in 2014. However, their role has somewhat diminished as more and more of Iraq's security forces have regained their strength.

Iraq's Sunni Arabs and rights groups have long complained that the militiamen have been involved in extrajudicial killings, abuse and the theft or destruction of property in areas where they drove out Daesh. The militias' commanders, however, deny the charges or insist that the excesses are the work of an isolated few.

An Associated Press team in eastern Mosul on Saturday said scores of civilians were continuing to stream out of the city's inner neighborhoods to escape the fighting, making their way to camps for the displaced.

The U.N. refugee agency, UNHCR, says at least 73,000 Iraqis have fled Mosul since the government's campaign to retake the city began on Oct. 17.