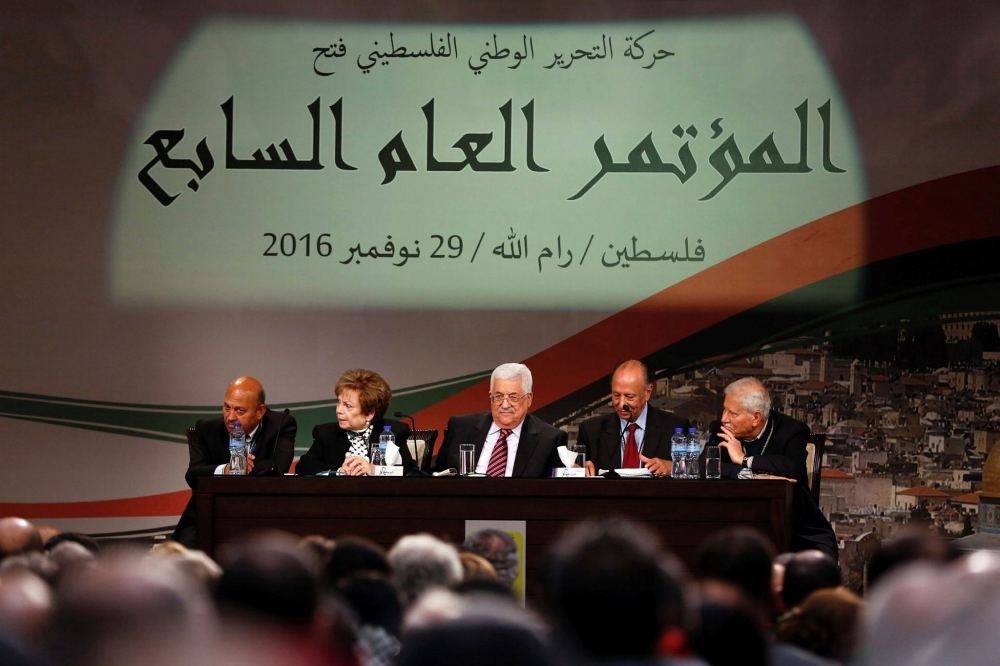 Palestinian president Mahmud Abbas looks on during the opening ceremony of the 7th Fatah Congress on Nov. 29 at the Muqataa, the Palestinian Authority headquarters, in the West Bank city of Ramallah.
by Compiled from Wire Services Dec 01, 2016 12:00 am

After long failed reconciliation efforts between Fatah and Hamas movement, Hamas leader Mashal has called for cooperation with Fatah during party congress as Palestinian President Abbas was unanimously reelected as Fatah leader

Amid internal dissent and grim prospects for advancing his decades-long goal of achieving a Palestinian state, President Mahmud Abbas addressed his Fatah party's first congress since 2009. Despite tension, Hamas political bureau chief Khaled Mashal also stated that they are ready to form coalition with all groups, especially the Fatah movement, for the revival of the Palestinian cause. A letter from exiled Hamas leader, in which he said he was "ready to cooperate with Fatah," was read at the opening of the congress on Tuesday. Abbas and Mashal recently met in Qatar for the first time in two years.

The 81-year-old leader was re-elected head of Fatah as the congress opened on Tuesday, but speculation has mounted over who will eventually succeed him as Palestinian president. He has not publicly supported a successor.

Fatah's five-day congress is expected to discuss whether to seek to introduce a UN Security Council resolution against Israeli settlements. Abbas, head of Fatah, the Palestine Liberation Organization and the Palestinian Authority since Yasser Arafat's death in 2004, has consistently called for a negotiated solution and opposed another violent insurrection.

"In my opinion, the main goal is to strengthen Fatah as the de facto dominant power within the Palestinian Authority," Nur Arafeh, policy fellow at the Palestinian Al-Shabaka think tank, told Anadolu Agency.

According to the most recent survey by the Palestinian Center for Policy and Survey Research, only 5 percent of Palestinians would support Dahlan as a candidate to replace Abbas -- a long way behind Marwan Barghouti, the imprisoned leader of Fatah's armed wing, who is supported by more than a third of the population. The same survey said almost two-thirds of Palestinians oppose Dahlan's return to politics. Dahlan, who was forced to leave the West Bank six years ago after a falling out with Abbas, now lives in the United Arab Emirates. He has forged close ties with the leaders of the UAE, Egypt, Saudi Arabia and Jordan.

Meanwhile, Ban Ki-moon, whose 10-year tenure as UN secretary-general ends in a month, said Tuesday that the international community must make clear that it remains committed to peace negotiations between Israel and the Palestinians because the prospects of an agreement are "threatening to slip out of reach."

He said that events in recent years - including two unsuccessful attempts to negotiate a settlement and armed conflict - have left Palestinians and Israelis alike frustrated and disillusioned.

"It has strengthened radicals and weakened moderates on both sides," he said. "Making matters worse is a dangerous vacuum within the international community as crises elsewhere claim the attention of world leaders." The General Assembly meeting came on the UN's annual "International Day of Solidarity with the Palestinian People."
Last Update: Dec 01, 2016 2:09 am
RELATED TOPICS