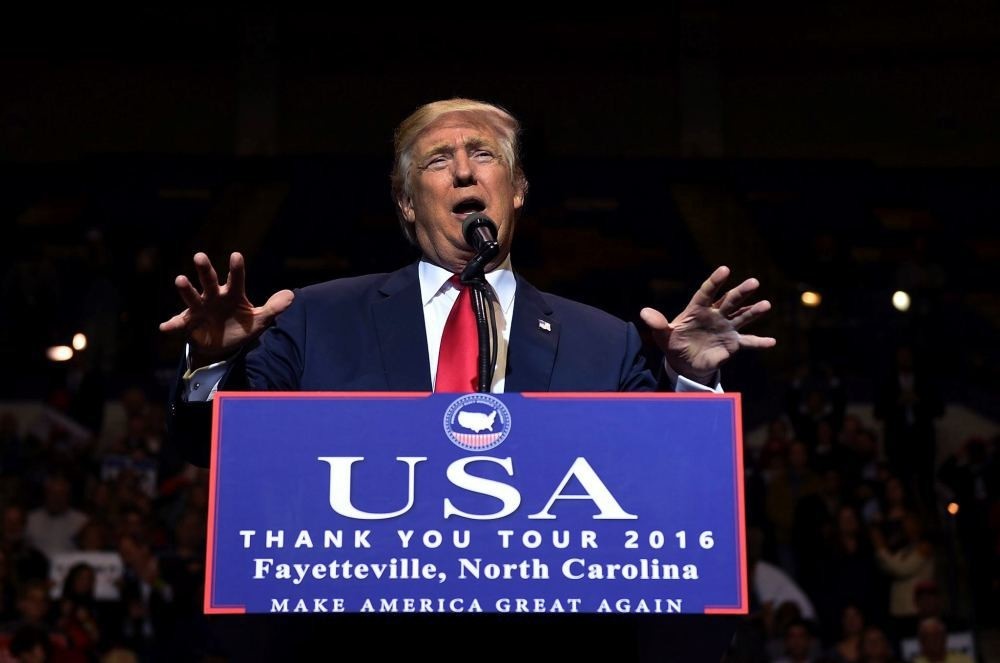 US President-elect Donald Trump speaks at the Crown Coliseum in Fayetteville, North Carolina on Dec. 6, during his USA u2018Thank Youu2019 tour.
by Compiled from Wire Services Dec 08, 2016 12:00 am

Drawing sharp contrast with President Obama's counterterrorism strategy, the president-elect Donald Trump promotes a more confrontational U.S. military policy that would avoid interventions in foreign conflicts, like as in Syria, and instead focus heavily on defeating Daesh

The U.S. president-elect Donald Trump who said that he knows "more about ISIS than the generals do" challenges President Obama's counter-terrorism strategy as his military policy largely focuses on defeating Daesh rather than intervening in Syria, Iraq.

During the presidential campaign, he said he would listen to top military officers about the need for ground troops to fight Daesh, at one point floating a figure of 20,000 to 30,000. Meanwhile, he's suggested that ousting Bashar al-Assad isn't a top priority and that closer alignment between the U.S. and Russia, which backs Assad, would be positive.

Trump argued that Obama's decision to withdraw the bulk of troops from Iraq, rather than negotiating harder with Baghdad to leave some there, created a power vacuum that allowed Daesh to form and seize territory.

In the latest stop on a "thank you" tour of states critical to his Nov. 8 election win, Trump introduced his choice for defense secretary, General James Mattis, to a large crowd in this city near the Fort Bragg military base, which has deployed soldiers to 90 countries around the world.

"We will stop racing to topple foreign regimes that we know nothing about, that we shouldn't be involved with," Trump said. "Instead, our focus must be on defeating terrorism and destroying ISIS, and we will."

Trump's rhetoric was similar to what he said during the election campaign when he railed against the war in Iraq.

In Fayetteville, he vowed a strong rebuilding of the U.S. military, which he suggested has been stretched too thin. Instead of investing in wars, he said, he would spend money to build up America's aging roads, bridges and airports.

Even so, Trump said he wants to boost spending on the military. To help pay for his buildup, Trump pledged to seek congressional approval for lifting caps on defense spending that were part of "sequestration" legislation that imposed cut spending across the board.

"We don't want to have a depleted military because we're all over the place fighting in areas that we shouldn't be fighting in. It's not going to be depleted any longer," he said.

Trump said any nation that shares these goals will be considered a U.S. partner.

Obama's speech at MacDill Air Force Base in Tampa, Florida, was to be his last major national security speech before he leaves office, the White House said.

In the absence of more details from Trump, attention has turned to the advisers he's selected to form his team, including retired Gen. Michael T. Flynn, tapped for national security adviser. Flynn, who has attracted controversy over his comments critical of Islam, has urged a far more aggressive military campaign against Daesh.
RELATED TOPICS