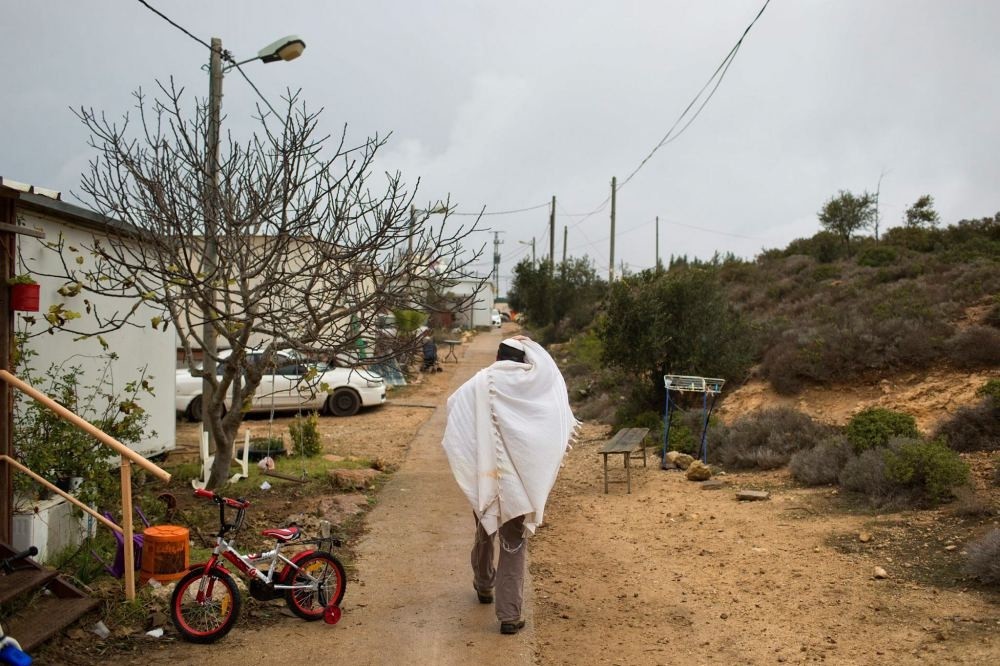 A Jewish settler covered in a prayer shawl walks back to his house after morning prayer in Amona, an unauthorized Israeli outpost in the West Bank, east of the Palestinian town of Ramallah, Dec. 18.
by Compiled from Wire Services Dec 20, 2016 12:00 am

With the settlers refusing to leave and several hundred hardline youths streaming into the outpost in recent days, Jewish settlers in an unauthorized West Bank outpost agreed to a plan to relocate their hilltop outpost peacefully

Settlers due to be evicted from an outpost in the occupied West Bank under an Israeli court order accepted a government-proposed deal on Sunday to head off a forced evacuation and confrontation with troops.

The Supreme Court had ruled that the Amona outpost, where 330 settlers live, must be evacuated by Dec. 25. The court found that Amona was built illegally on privately-owned Palestinian land.

The case, a test of authority between an increasingly politically powerful far-right in Israel and an independent judiciary, led to legislation that would retroactively legalize settlement homes on Palestinian-owned tracts.

The proposed law has been promoted by ultranationalist partners in Prime Minister Benjamin Netanyahu's coalition government and received backing from the Israeli leader.

It needs to pass two more parliamentary votes to go on the books, but ultimately could be overturned by the Supreme Court, where it is expected to face legal challenges by settlement opponents.

Due to the existing court eviction order, Amona was not included in the bill. The legislation was condemned by Western powers and the United Nations, and described by Palestinians as a land grab and step towards annexation of the West Bank.

Amona is the largest of about 100 unauthorized outposts erected in the West Bank without permission but generally tolerated by the Israeli government.

Religious nationalist hardliners, who favour annexing the West Bank and oppose a Palestinian state, said they sympathised with the residents but regretted they had agreed to the plan. "Given the way pressure was inflicted on them, I can only feel sorrow that they accepted Netanyahu's word when it has no value," Baruch Marzel, a follower of the late racist rabbi Meir Kahane, told reporters in the outpost after the deal was announced.

A leading Israeli think tank on Monday said it has found that Israelis are increasingly losing faith in their government and most Israeli public institutions — findings that mirror the global trend of dissatisfaction and cynicism that helped propel Britain's exit from the European Union and the victory of President-elect Donald Trump.

The Israel Democracy Institute also found a continuing nationalistic streak among the country's Jewish majority, with more than half of respondents in a nationwide survey opposed to allowing Arab political parties into the governing coalition. It found that 59 percent of Jews oppose having Arab parties as part of governing coalitions, and 52.5 percent of Jews believe that those who refuse to accept Israel as the nation state of the Jewish people should be stripped of their right to vote.

The dispute over whether to demolish the outpost has taken on international importance because of concern over settlement expansion in the West Bank, occupied by Israel since 1967.

All Israeli settlements in the West Bank, including annexed east Jerusalem, are seen as illegal under international law, but Israel differentiates between those it has approved and those it has not. Israeli settlements are seen as major stumbling blocks to peace efforts as they are built on land the Palestinians see as part of their future state.
Last Update: Dec 20, 2016 2:40 am
RELATED TOPICS