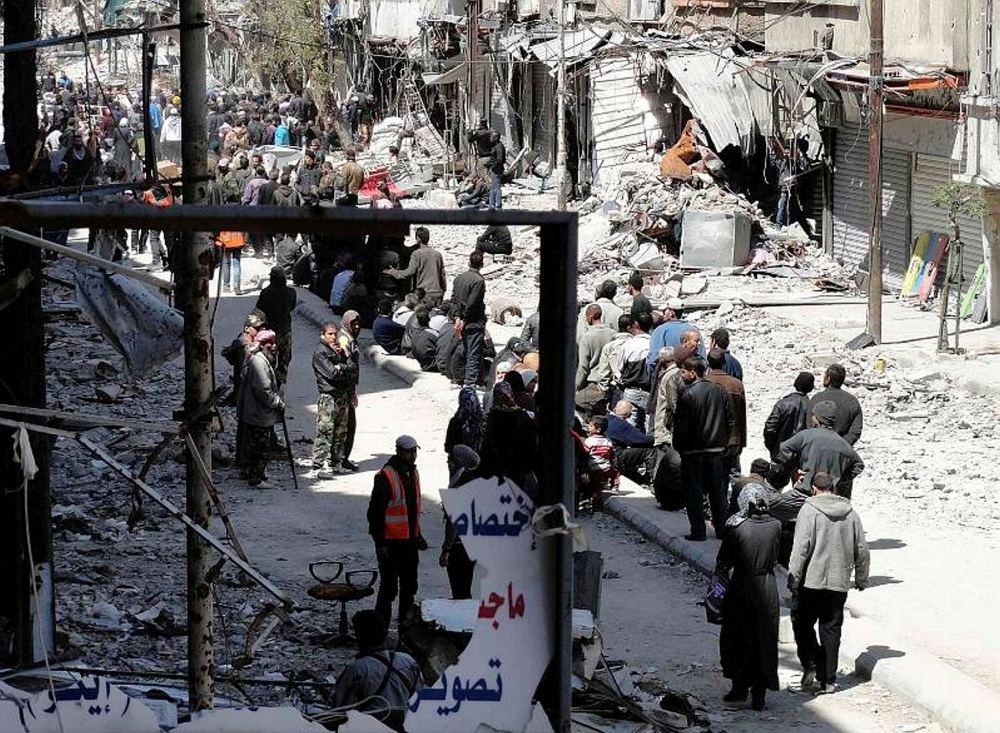 Residents wait to receive food aid distributed at the Palestinian refugee camp of Yarmouk.
by Yusuf Selman İnanç Dec 22, 2016 12:00 am

The situation in the Yarmouk refugee camp, populated by displaced Palestinians, has deteriorated as people are besieged and suffering from a shortage of food and clean water, a human rights group reported on Monday. The Action Group for Palestinians of Syria (AGPS) said the main problems are water-related diseases, as the camp has had no water for more than two years, and a shortage of medical equipment, as a result of which children have been severely affected. Quoting the Medical Rescue Center (MRC), the group said, "Yarmouk has been going through a severe shortage of medicines and medical equipment. Photos of children and patients undergoing operations were posted on the MRC's Facebook page. MRC Director, Doctor Reyad Idris, said the humanitarian situation is going from bad to worse in the al-Rija area, blockaded by government troops and Daesh. He warned of the swift propagation of deadly diseases and syndromes like typhoid, respiratory tract infections, itching, and skin rash among civilians, mostly children below the age of eight." 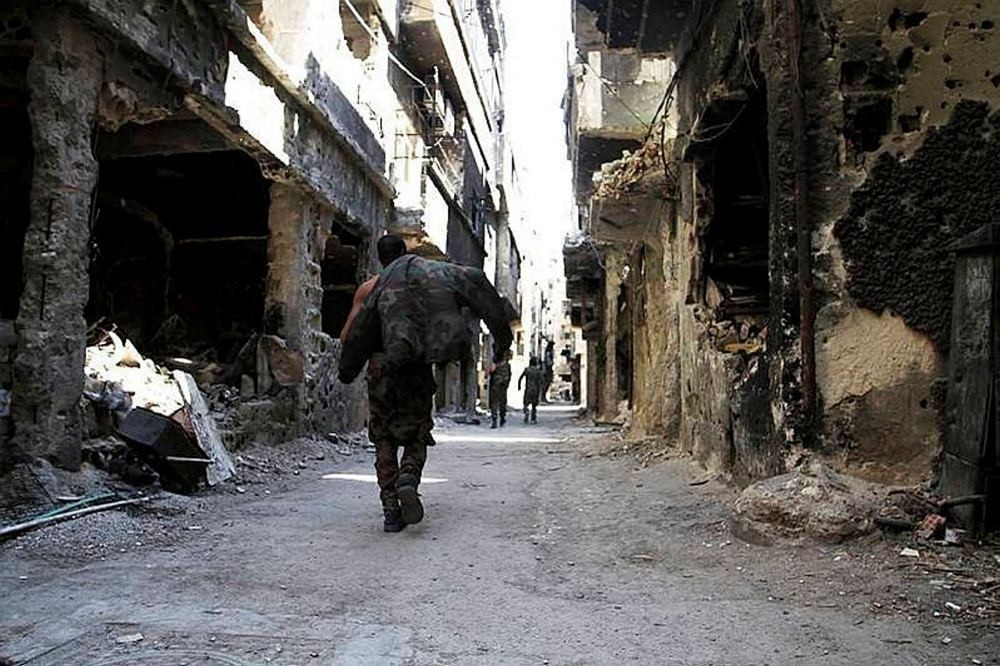 A man walks between damaged buildings in Yarmouk refugee camp located in a Damascus suburb.

Yarmouk, an unofficial refugee camp, is a district of Syria's capital Damascus and was established in 1957 when thousands of Palestinians were displaced by Israel. The camp has become one of the strongholds of the pro-Palestinian Liberation Organization (PLO) in the last few decades and has therefore established better relations with the Syrian regime. The besieged Yarmouk camp is located on the outskirts of Damascus, home to the largest Palestinian refugee community in Syria. Before the Syrian war erupted in 2011, it accommodated more than 180,000 Palestinian refugees. However, due to severe security conditions, around 140,000 refugees have been internally displaced as a result of the war. The recent reports state that the thousands of civilians still trapped in the camp have been suffering from desperate humanitarian conditions, without access to the basics.

After the clashes started in 2011, camp residents already suffering from poverty were subjected to fierce battles between groups loyal to the regime and opposition groups. The regime has not avoided bombing its residents and cutting supply lines for food and water. At least 166 camp residents, including dozens of babies, have starved to death in recent years as the regime did not allow the inflow of humanitarian aid. Thus, the victims of the Arab-Israeli wars became victims of the civil war. And now, the residents' bad luck has left them stuck in between Daesh, Jabhat Fath Sham, previously known as the al-Qaeda-linked Nusra Front, and the regime, with neither side behaving well.

"Some 1,277 Palestinians sheltering in Yarmouk camp were killed in the raging Syrian warfare, 447 of whom died in unabated shelling of the camp, while the blockade and medical neglect took the lives of 188 Palestinian refugees. Two-hundred-and-three refugees were, meanwhile, fatally gunned down while 160 Palestinians were killed by sniper bullets. One-hundred-and sixty-nine others were tortured to death at the same time as 10 Palestinians were field-executed. Israeli bullet fire killed 11 refugees while 10 others were kidnapped and killed. Fourteen Palestinians died as a result of car-bomb blasts and 14 others were assassinated in the camp. Eight more refugees drowned at sea and five died of health issues ravaging their vulnerable bodies," the AGPS report said. The group also stated, "At least 3,411 Palestinians, including 455 women, were killed in war-torn Syria."

Expressing its concern, the United Nations Relief and Work Agency said, "Intensive armed engagements continue, while civilians remaining in the area are forced to live without access to adequate food, safe water, electricity or essential services. Damage to residences and infrastructure is severe, with many families forced to live without proper shelter."

The Syrian civil war, in its fifth year, has caused the death of more than 400,000 people and the wounding of at least 1 million, with thousands missing. The war has also displaced nearly 12 million people, roughly the country's pre-war population.
RELATED TOPICS