At least 27 dead, 44 injured in twin blasts carried out by Daesh terrorists in Baghdad 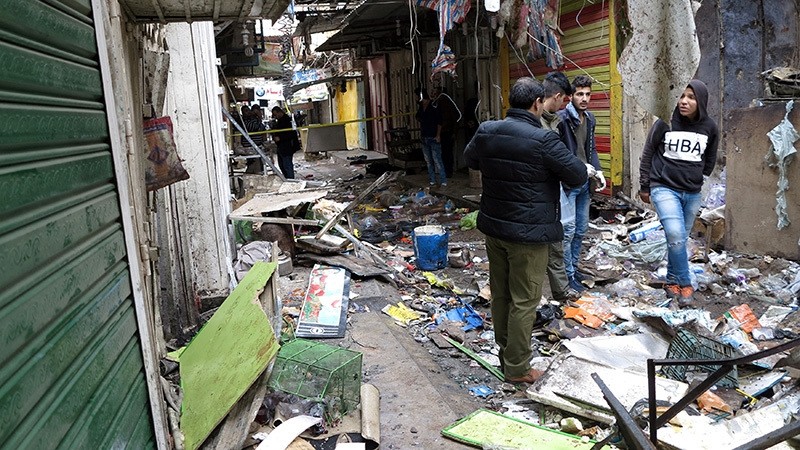 Iraqi police and medical officials said that two bombs hit a market in central Baghdad on Saturday, killing at least 27 and wounding 44.

The Daesh terrorist group later claimed responsibility for the attacks in a statement posted by its Aamaq news agency, confirming that the blasts came from a pair of suicide bombers.

Police said the blasts went off near car spare parts shops in al-Sinak during the morning rush. One of them was triggered by a suicide bomber, the other was a planted explosive, an Interior Ministry official told Reuters.

The bombers attacked the Al-Sinek area, killing at least 27 people and wounding 53, a police colonel said. An officer in the interior ministry and a hospital official confirmed the toll.

"Many of the victims were people from the spare parts shops in the area, they were gathered near a cart selling breakfast when the explosions went off," said Ibrahim Mohammed Ali, who owns a nearby shop.

Torn clothes and mangled iron were strewn across the ground in pools of blood at the site of the wreckage near Rasheed street, one of the main thoroughfares in Baghdad, an AFP photographer reported.

The targeted area is packed with shops, workshops and wholesale markets and usually teeming with delivery trucks and daily labourers unloading vans or wheeling carts around.

Turkey issued a statement after the deadly twin bombings, condemning terror and reiterating its solidarity with the Iraqi government.

"We strongly condemn this atrocious terrorist attack at a time when Iraq has made significant strides in the fight against Daesh terrorism," the foreign ministry said in a statement.

Turkey said it would continue to stand behind the Iraqi government and its people in the fight against terror.

Saturday's blasts came amid a wide-ranging offensive launched by the Iraqi army to recapture Mosul from Daesh.

Iraq's second-largest city in terms of population, Mosul was overrun -- along vast swathes of territory in both northern and western Iraq -- by Daesh in 2014.