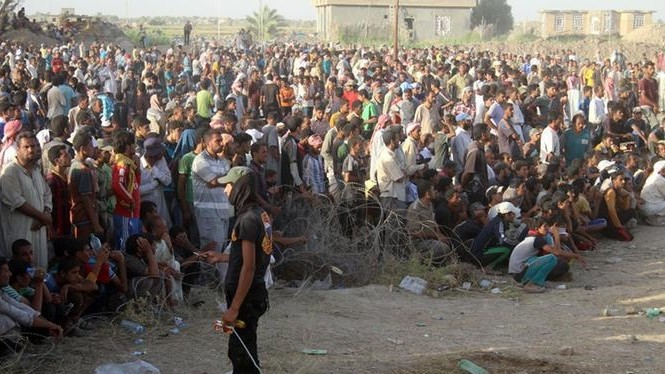 As the battle for Mosul continues to clear the city of Daesh militants, Mosul's civilians are being used as human shields, mistakenly bombed, or executed, while being accused of espionage and barred from leaving the city

The battle for Mosul continues as Iraqi forces backed by the U.S.-led coalition and peshmerga and Iran-backed Shiite militias advance against Daesh positions. Although rights groups and Turkey have expressed their concerns over the involvement of sectarian Shiite militias, the Iraqi government has turned a blind eye to these worries. Shiite groups have created fear among civilians who have already faced Daesh's increasing atrocities. Several reports indicate that the number of civilians killed since the operation began has surpassed a thousand.

Reuters last month reported that Daesh started killing everyone with a SIM card, accusing them of espionage. "That paranoia appears to have reached new levels, as Daesh's enemies advance. Suspicion grew in the weeks before government troops began to encircle Mosul in mid-October," the report said. "Retribution was brutal. Daesh killed 58 suspected plotters by placing them in cages and drowning them, according to residents and Iraqi officials. Since then, Daesh has executed another 42 people from local tribes, Iraqi intelligence officers said. Those people were also caught with SIM cards. Possession of SIMs or any form of electronic communication now amounts to an automatic death sentence, according to residents in Daesh held areas. The group has set up checkpoints where its militants search people and regularly mount raids on areas hit by U.S. air strikes because Daesh officials assume locals have helped to identify targets," it continued.

While Daesh has made it very difficult to live in the city, the threat, posed by the Shiite militias, especially the Hashd al-Shaabi, raises questions about the post-liberation era. Many rights groups, primarily Human Rights Watch, have released reports documenting atrocities, torture, displacements and human rights violations. A 2015 Amnesty International report said: "Shiite militias have been abducting and killing Sunni civilian men in Baghdad and around the country. These militias, often armed and backed by the government of Iraq, continue to operate with varying degrees of cooperation from government forces, ranging from tacit consent to coordinated, or even joint, operations."

The Long War Journal reported last July that an order signed by al-Abadi had recognized the PMF as a separate but legitimate armed force. "According to Office Order 91, the PMF 'will be an independent military formation and a part of the Iraqi armed forces, and linked to the general commander of the armed forces.' The commander of Iraq's armed forces is its prime minister," the journal stated. "PMF is an Iran-sponsored umbrella military organization composed of approximately 40 militia groups which were predominantly Shiite. Civilian authorities did not always maintain effective control of the security forces, the regular armed forces and domestic law enforcement bodies," globalsecurity.com, a webpage that monitors terror groups in the region, reported last July. When Kurdish Regional Government (KRG) President Massoud Barzani in 2015 said they did not need the PMF, al-Abadi defended the group and claimed that it was representing all Iraqis despite videos circulating on the social media showing graphic images of PMF militants burning civilians alive and even eating their hearts.

The unfortunate civilians stuck between Daesh and the Shiite militias have also been killed by bombardments and artillery shelling. "Fleeing residents who spoke with Human Rights Watch said that Daesh justified the attacks on civilians because many of them had refused the group's orders to join its retreat west to areas of Mosul that it still controlled, where they feared they would be used as human shields. Residents said Daesh members told them in person, by radio, and over mosque loudspeakers that those who stayed behind were 'unbelievers' and therefore valid targets along with the Iraqi and coalition forces," HRW reported last week.

The U.S. military last week started an aerial strike that targeted a hospital, killing civilians. A van carrying Daesh militants was targeted and hit in the airstrike, the Combined Joint Strike Force said in a statement. "The van was struck in what was later determined to be a hospital compound parking lot, resulting in possible civilian casualties," it said.
Last Update: Jan 02, 2017 1:16 am