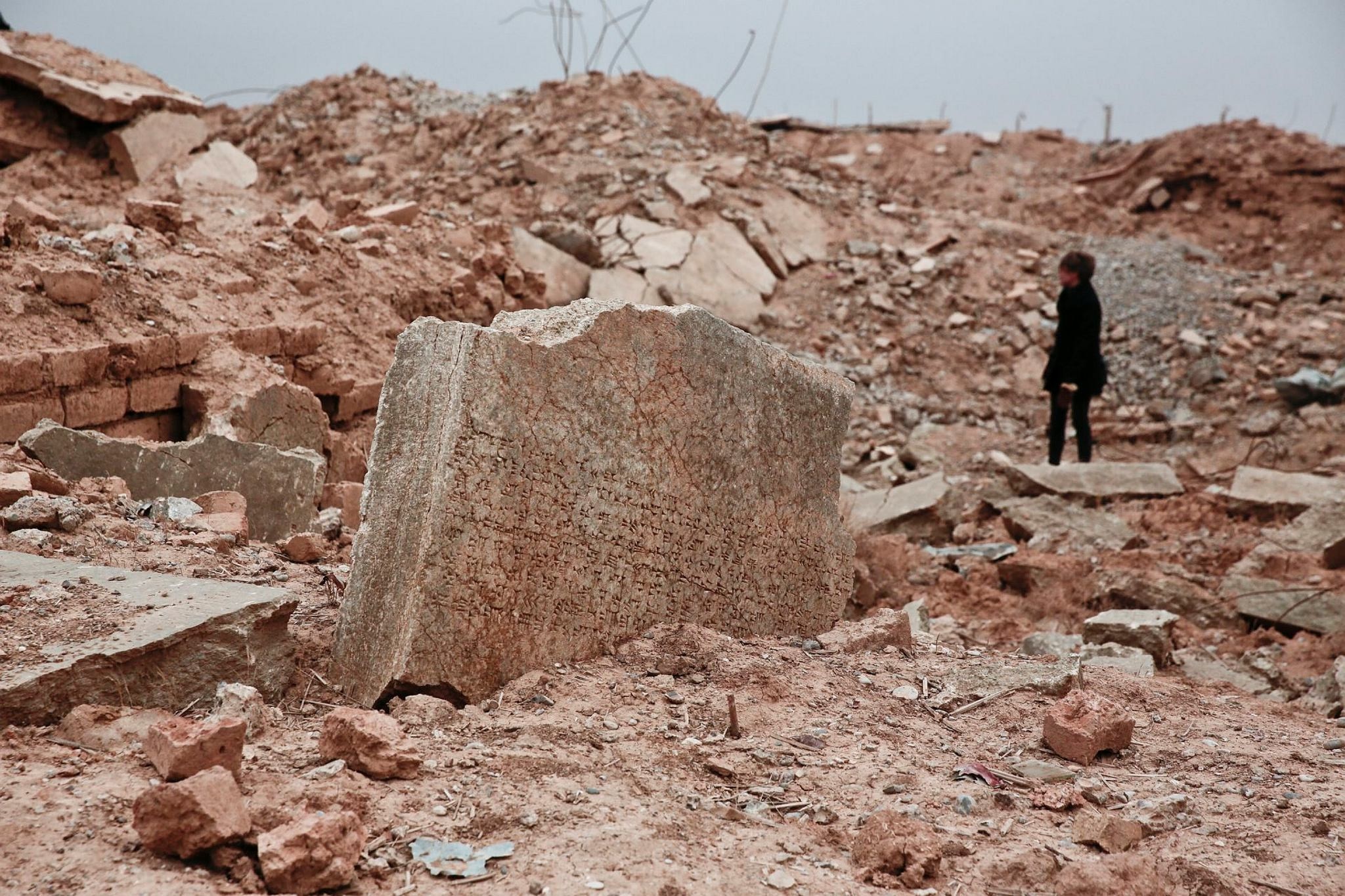 The chilly December wind whipped rain across the strewn wreckage of a city that, nearly 3,000 years ago, ruled almost the entire Middle East. Rivulets of water ran through the dirt, washing away chunks of ancient stone.

The city of Nimrud in northern Iraq is in pieces, victim of the Daesh's fervor to erase history. The remains of its palaces and temples, once lined in brilliant reliefs of gods and kings, have been blown up. The statues of winged bulls that once guarded the site are hacked to bits. Its towering ziggurat, or step pyramid, has been bulldozed.

The militants' fanaticism devastated one of the Middle East's most important archaeological sites. But more than a month after the militants were driven out, Nimrud is still being ravaged, its treasures disappearing, imperiling any chance of eventually rebuilding it, an Associated Press team found after multiple visits last month.

With the government and military still absorbed in fighting the war against the Daesh in nearby Mosul, the wreckage of the Assyrian Empire's ancient capital lies unprotected and vulnerable to looters.

"When I heard about Nimrud, my heart wept before my eyes did," said Hiba Hazim Hamad, an archaeology professor in Mosul who often took her students there.

In three of the AP's four visits, its team wandered the ruins alone freely for up to an hour before anyone arrived. No one is assigned to guard the site, much less catalog the fragments.

Toppled stone slabs bearing a relief that the AP saw on one visit were gone when it returned.

Perhaps the only vigilant guardian left is an Iraqi archaeologist, Layla Salih. She has visited multiple times, photographing the wreckage to document it and badgering militias to watch over it. Walking through the ruins on a rainy winter day, she pointed out things that were no longer in place.

"The good thing is the rubble is still in situ," she said. "The site is restorable."

To an untrained eye, that's hard to imagine, seeing the destruction caused by the Daesh. Salih estimated 60 percent of the site was irrecoverable.

The site's palaces and temples were spread over 360 hectares (900 acres) on a dirt plateau on the edge of the Tigris River valley.

A 140-foot-high ziggurat once arrested the gaze of anyone entering Nimrud. Now there is only lumpy earth. Archaeologists had never had a chance to explore the now-bulldozed structure.

Past it, in the palace of King Ashurnasirpal II, walls are toppled into giant piles of bricks. The palace's courtyard is a field of cratered earth. Pieces of the two monumental winged bulls are piled nearby — their heads missing, likely taken to be sold.

Off to the left are the flattened remains of the temple of Nabu, a god of writing. During a Dec. 14 UNESCO assessment tour, a U.N. demining expert peered at a hole leading to a seemingly intact tomb and warned that it could be rigged to explode.

From 879-709 BC, Nimrud was the capital of the Assyrians, one the ancient world's earliest empires. In modern excavations, the site yielded a wealth of Mesopotamian art. In the tombs of queens were found troves of gold and jewelry. Hundreds of written tablets deepened knowledge about the ancient Mideast.

"The most important thing right now is to ensure some basic protection," she said.

But the government has many priorities. It is still fighting Daesh in Mosul, and the list of reconstruction needs is long.

Tens of thousands of citizens live in camps. Much of the city of Ramadi is destroyed. More than 70 mass graves have been unearthed in Daesh territory. Other ancient sites remain under Daesh control.

None of the various armed groups around Nimrud — whether the military or various militias — has been dedicated to guarding it.

During the UNESCO tour, Salih noticed that some of the ancient bricks from the rubble had been neatly piled up as if to be hauled away — perhaps, she suspects, to repair homes damaged in fighting. Stone tiles at the palace entrance vanished from where she saw them last.

Two locals were arrested with a marble tablet and stone seal from Nimrud, presumably to sell. The men are in custody.

But it's unclear where the artifacts seized from them are.

The police insisted they were at a lab in the northern city of Irbil. The lab said it knew nothing about them. The Antiquities Ministry in Baghdad said they were safe in the Nineveh government offices. An official there said they were with the police awaiting transit to Baghdad.

Salih is seeking international funding to pay someone to guard the site. But she recognizes the job will have to go to one of the militia factions, and she has no illusions they will provide full protection.

She'll have to cajole them into doing as much as they can.

"There isn't another choice, as you see," she said.