Houthis say they targeted Saudi capital with a missile 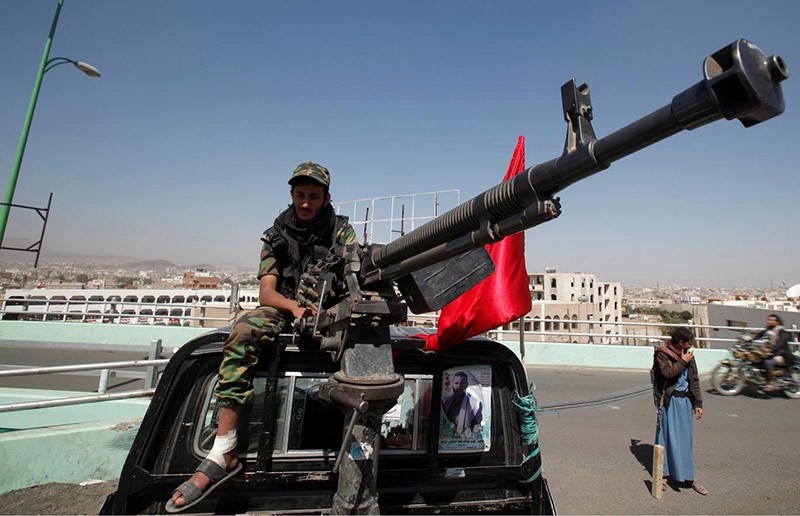 A Houthi militant sits atop a police patrol truck stationed on a bridge in the capital Sanaa (Reuters Photo)
by Associated Press Feb 07, 2017 12:00 am

Yemen's Houthi rebels said on Monday they have "successfully" fired a ballistic missile at Riyadh for the first time, vowing more attacks on the Saudi capital.

There was no immediate comment from the kingdom but the claim came exactly a week after Saudi Arabia said a "suicide gunboat" belonging to Yemen's Iran-backed Houthi rebels rammed into one of its frigates in the Red Sea, killing two crew members.

Saudi Arabia has been leading a mostly Gulf Arab coalition against the Houthis since March 2015, seeking to restore Yemen's internationally-recognized government, which the Houthis had forced to flee from the capital, Sanaa. Saudis see the Houthis as a proxy of the Shiite power Iran, the kingdom's key regional rival.

The Houthis said in a statement carried by the rebel-run SABA news agency that the missile "targeted" the al-Mazahmiya army base in western Riyadh, around 1,000 kilometers (650 miles) from Sanaa.

In October, the kingdom said it intercepted and destroyed a Houthi-fired missile some 65 kilometers (40 miles) from the Muslim holy city of Mecca.

Last week's attack on the Saudi warship was one of several attacks by the Houthis on naval ships. In October, the Houthis said that they had hit a vessel operated by the United Arab Emirates. The UAE military acknowledged only that a boat under its command was involved in an "incident" in the Bab al-Mandeb Strait at the southern end of the Red Sea and said there were no casualties. Also that same month, the United States accused the Houthis of firing missiles at a U.S. navy ship but there were no injuries.

On Thursday, the UAE summoned Iran's top diplomat in Abu Dhabi and handed over a note protesting the "illegal Iranian supplies of arms to the militias in Yemen."

Both Iran and Houthis deny any military ties between them but weapons shipments reportedly coming from Iran and headed to Yemen have been confiscated by Western naval forces.

The Saudi-led coalition has imposed an air and sea blockade since the beginning of the conflict to prevent weapons from reaching Houthis. The blockade has been criticized by international groups, which say it is deepening the humanitarian suffering of Yemenis.