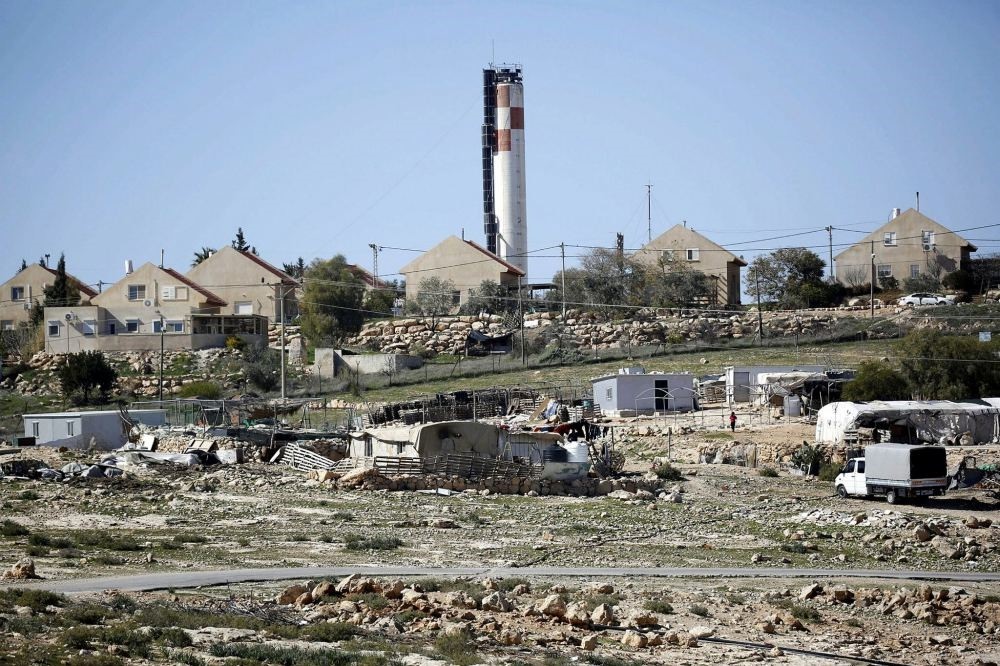 A general view of the Karmel settlemets in the West Bank village of Um al-khair, south of Hebron, Feb. 7.
by Compiled from Wire Services Feb 10, 2017 12:00 am

A pair of Israeli rights groups on Wednesday asked the country's Supreme Court to overturn a new law legalizing dozens of settler outposts in the West Bank, opening what is expected to be a lengthy legal battle over the contentious legislation.

The legal challenges added new uncertainty to the law, which has drawn fierce international condemnations and been questioned by Israel's own attorney general.

The law, backed by Prime Minister Benjamin Netanyahu's nationalist coalition, retroactively legalized thousands of homes found to have been built on private Palestinian land. While its backers claim these homes were built "in good faith," critics say the law amounts to legalized land theft.

In the first lawsuit against the measure, the Arab rights group Adalah and the Jerusalem Legal Aid and Human Rights Center asked the high court to block implementation of the law. It was the first in what is expected to be a series of legal challenges.

"This sweeping and dangerous law permits the expropriation of vast tracts of private Palestinian land, giving absolute preference to the political interests of Israel," said Suhad Bishara, an attorney for Adalah.

She said the court gave Israel 30 days to respond. She added that Adalah had requested the court freeze the law's implementation until its final ruling.

In the meantime, the state can begin implementing the law. Experts say the legalization process will take years as authorities identify properties, confiscate lands and work out compensation with the original Palestinian owners.

"As part of the plan, the committee approved the establishment of a new neighborhood in 'Shvut Rachel' settlement located in northern Jerusalem," it said. "The neighborhood was initially prepared to accommodate the Jewish settlers who were evacuated from the outpost Amona last week," the Israeli news site added.

On Monday evening, the Knesset retroactively legalized Jewish-only outposts built on Palestinian land in the West Bank, which are considered illegal under international law. The UN on Tuesday slammed the bill.

The bill comes amid heightened anxiety in the Israeli-Palestinian conflict after a new U.S. administration under President Donald Trump took office last month. Since Trump was sworn in, Israel has announced three separate settlement plans that allows for thousands more housing units the UN and the international community deem illegal. According to official figures, the Israeli authority has approved the construction of more than 7,250 settlement units in Israeli occupied East Jerusalem and West Bank since the beginning of 2017.

The West Bank is home to some 120 settlements recognized as legal by Israel, as well as about 100 unauthorized outposts that the government has tacitly accepted. The new law sets out a process to legalize about half of those outposts, as well as about 3,000 additional homes built illegally in recognized settlements. Palestinian landowners can receive financial compensation or alternative land. International law views the West Bank and East Jerusalem as "occupied territories" and considers all Jewish settlement-building activity on the land as illegal.
RELATED TOPICS