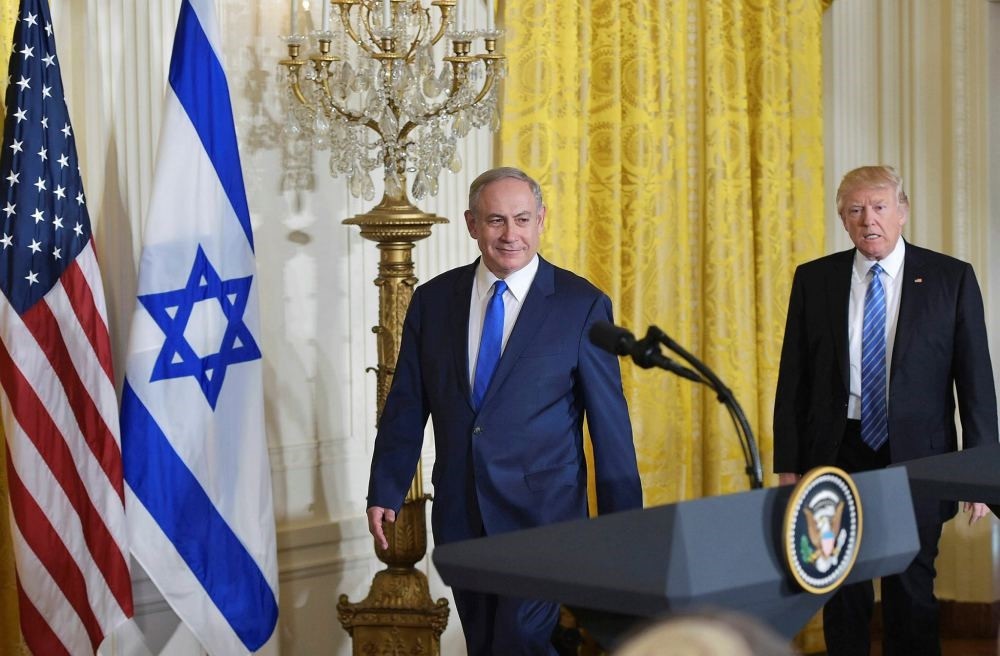 U.S. President Donald Trump and Israel's Prime Minister Benjamin Netanyahu arrive for a joint press conference in the East Room of the White House on February 15.
by Yusuf Selman İnanç Feb 17, 2017 12:00 am

Hosting Israeli Prime Minister Benjamin Netanyahu for the first time, U.S. President Donald Trump did not insist on a two-state solution as part of a peace accord while renouncing Washington's years-long quest to the Israeli-Palestinian conflict. The meeting was expected to be held in a positive atmosphere. However, Trump was not a staunch supporter of all of Israel's demands as he urged Netanyahu to curb the illegal settlements. He also did not clarify his stance toward the two-state solution discussions. "I'm looking at two-state and one-state and I like the one that both parties like."

"I'm very happy with the one that both parties like. I can live with either one. I thought for a while it looked like the two-state, looked like it may be the easier of the two, but honestly if Bibi and if the Palestinians if Israel and the Palestinians are happy, I'm happy with the one they like the best," Trump said, referring to Netanyahu by his nickname. On the illegal settlements, he said, "I would like to see you pull back on settlements for a little bit," while Netanyahu claimed the illegal settlements were not the core of the conflict.

The Palestinian side was not happy with the statement as Hanan Ashrawi, a senior member of the Palestine Liberation Organization, said, "If the Trump administration rejects this policy it would destroy the chances for peace and undermine American interests, standing and credibility abroad. Accommodating the most extreme and irresponsible elements in Israel and in the White House is no way to make responsible foreign policy," she added.

Despite the disagreement on the two-state solution and illegal settlements, the meeting was very warm compared to the previous visits of the Israeli side during the era of Obama. U.S.-Israeli relations under former President Barack Obama witnessed their worst era after the White House signed a nuclear deal with Iran, which is considered Israel's biggest and most dangerous enemy. Moreover, the Obama administration opposed the new illegal settlements and abstained from the United Nations Security Council vote condemning Israel's illegal settlements. "For Mr. Netanyahu, it was the final betrayal by a president who was supposed to be an ally but never really was. For Mr. Obama, it was the inevitable result of Mr. Netanyahu's own stubborn defiance of international concerns with his policies. The two sides did little to hide their mutual contempt. After talks led them to conclude that Mr. Obama would not veto the resolution, as presidents of both parties have done in the past, Israeli officials essentially washed their hands of the incumbent and contacted his successor in the wings. President-elect Donald J. Trump promptly put out a statement calling on Mr. Obama to veto the resolution," The New York Times reported at the end of last December.

Allegedly, Obama has also sent more than $200 million to the Palestinian Authority in aid. Obama also asked Netanyahu in 2015 not to deliver a speech in Congress and refused to meet him after he did so. Israeli Ambassador Michael Oren said in 2010, "Israel's ties with the United States are in their worst crisis since 1975... a crisis of historic proportions." According to a poll, made by the Jerusalem Post in 2010, only 9 percent of Jewish Israelis believe that the Obama administration is more pro-Israel than pro-Palestinian. In 2009, Obama said in the U.N. "And we continue to emphasize that America does not accept the legitimacy of continued Israeli settlements." The dislike of Netanyahu by Obama was totally revealed when Obama's microphone was open while talking to former French President Nicholas Sarkozy. Sarkozy told Obama: "I cannot stand him [Netanyahu]. He is a liar." Obama replied: "You're fed up with him, but I have to deal with him every day!"

While Obama's first call after his inauguration was to Palestinian Authority President Mahmoud Abbas, Trump was congratulated firstly by Netanyahu. Trump also said the current illegal settlements are not obstacles to peace. However, despite the very positive atmosphere the two leaders are unlikely to reach a complete agreement on all issues as Trump said the new illegal settlements will not be helpful for peace. The two-state solution might be another dispute as Haaretz last weekend reported that "Netanyahu told ministers that Trump asked him in their Jan. 22 phone conversation if and how he intends to advance the peace process with the Palestinians. Netanyahu said that he told Trump that he supports the two-state solution and a final status agreement, but stressed that he told the president that the Palestinians are unwilling and detailed the reasons why a peace deal cannot be reached at this time." Public Security Minister Gilad Erdan also said on Sunday Netanyahu opposes a two-state solution. "I think all members of the security cabinet, and foremost the prime minister, oppose a Palestinian state," Erdan told Army Radio.

Politico's David Miller said Trump might not make a remarkable difference from his predecessors. "In a recent interview with the Israeli newspaper Hayom –his first as president – Trump sounded like any of his predecessors: Dodging the embassy issue and criticizing settlements as not good for peace. Trump may end up moving the embassy, but clearly he's coming to realize the idea is more fraught than he first imagined, and he appears to have put it on hold. To the surprise of many, myself included, his administration has issued a statement on Israeli settlements that would have been recognizable and acceptable to its predecessors," it said.

Despite disagreements on certain topics, it is a fact that the two countries' relations will be better compared to the era of Obama. The consequences of the warm relations on the region will be felt soon.
RELATED TOPICS