Iran to mend ties with Gulf amid rising tension with US 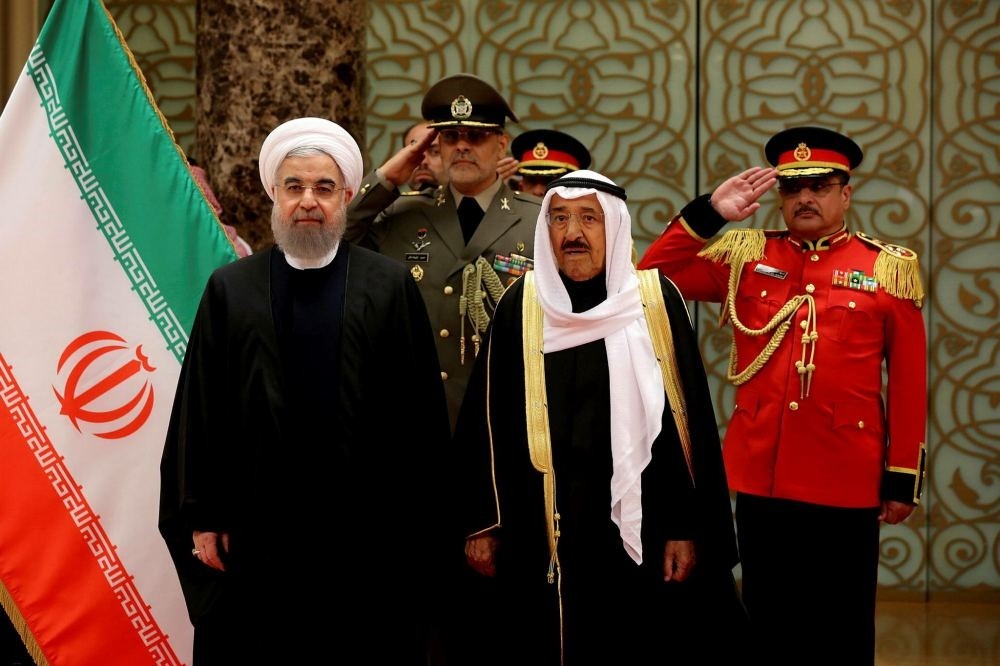 The main motivation behind Iranian President Rouhani's visit to Gulf countries seems to be U.S. President Trump's policies and his eagerness to better relations with Saudi Arabia, which was abandoned in the era of former President Obama

After Donald Trump became president, one of his first executive orders was to bar citizens of seven Muslim countries from entering the U.S., including those from Iran. The Tehran administration spoke out against the order but has not been backed by any other major power due to the ongoing conflicts. On the contrary, the United Arab Emirates made statements justifying Trump's decision. In return, Iran conducted a missile test that would obviously anger the U.S. Moreover, Iranian President Hassan Rouhani paid an official visit to the Gulf States, saying that Tehran wanted neighborly relations.

He visited Kuwait and Oman, calling on the Gulf States to benefit from the visit to improve ties. "Rouhani's regional initiative to accept invitations from the leaders of Oman and Kuwait signals the need for Islamic friendship and restoration of regional ties," Hamid Aboutalebi, the Iranian president's deputy chief of staff, tweeted on Tuesday. "This regional initiative is an opportunity that our regional friends should seize. Opportunity passes like a cloud. Take advantage of the good opportunity," he added.

Relations between Iran and the Gulf deteriorated after Iran-backed Houthis rebels in Yemen overthrew the internationally recognized government, which led to a deadly conflict and military operation conducted by Saudi Arabia and other Gulf States. Saudi Arabia and Bahrain cut diplomatic relations, while Kuwait, Qatar and the United Arab Emirates recalled their envoys in a show of solidarity with Riyadh after the Saudi embassy was torched in a fire last year in Tehran by crowds angered by the execution of Shiite scholar Nimr al-Nimr by Saudi Arabia. Oman has been playing an exceptional role, as the tiny oil-rich country helped to mediate secret U.S.-Iran talks in 2013 that led to the so-called nuke deal. "Kuwait's foreign minister paid a rare visit to Tehran late in January to deliver a message to Rouhani on the 'basis of dialogue' between the Gulf Arab States and Iran. Rouhani said Kuwait was among at least 10 countries to have offered to mediate in Iran's escalating feud with Saudi Arabia," Reuters reported last week.

Iran, which has been accused of exposing sectarian fault lines in the region, especially in Yemen, Syria and Iraq, tried to soften its rhetoric as Rouhani said there should be greater unity between Shiites and Sunnis and that they had coexisted side by side peacefully for hundreds of years.

The main motivation behind the visit seems to be Trump's policies and his eagerness to better relations with Saudi Arabia, which was abandoned in the era of former U.S. President Barack Obama. During the Obama era, Iran enjoyed the opportunity to fill the vacuum in the Middle East after the White House abandoned its traditional allies, like Turkey and Saudi Arabia. The Ankara government has warned its counterparts in the U.S. repeatedly over the expansion of the PKK's Syrian branch, the Democratic Union Party (PYD), which explicitly aims to create a Kurdish corridor to establish an autonomous area by neutralizing both Kurdish and Arab dissidents. However, the U.S., failing to ally with Turkey against the group, has increased its military support for the PYD under the pretext that it was the only group fighting Daesh on the ground. The U.S. had its worst relations with Saudi Arabia under Obama as the Riyadh administration claimed that Iran was provoking Shiite minorities in the Gulf against the monarchs and was arming Yemen's Houthis, who overthrew the internationally recognized government. Notwithstanding supporting Saudi Arabia's desperate war in Yemen against Iran's proxies, the Obama administration bettered relations with Iran, strengthening the country economically.

Iran, which fears large scale isolation, is sending positive signals to the Gulf. Millions of Yemenis have suffered in the proxy war between Riyadh and Tehran, millions of Syrians have been displaced after Iran-backed Shiite militias, including Lebanon-based Hezbollah, carried out deadly attacks and sided with the Syrian regime, and thousands of Iraqi Sunni civilians have been subjected to atrocities committed by Iran's proxies like Hashdi Shaabi, while Iran tries to soften relations.
RELATED TOPICS