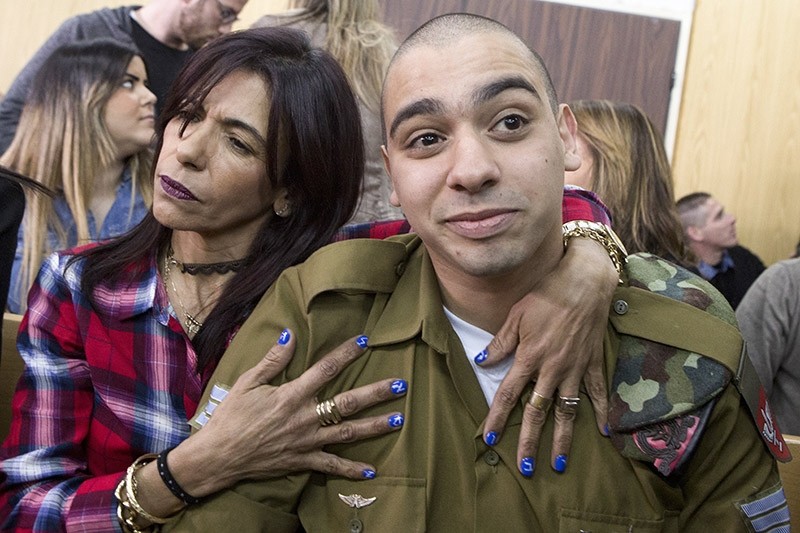 Israeli soldier Elor Azaria (R) with his mother at the start of his sentencing hearing in a Israel military court in Tel Aviv, 21 February 2017 (EPA Photo)
by Compiled from Wire Services Feb 21, 2017 12:00 am

An Israeli military court on Tuesday sentenced Israeli soldier Elor Azaria to 18 months in prison for the killing of a wounded Palestinian man, in a case that has split the nation.

Azaria, who was convicted of manslaughter last month, will also be demoted and will have a year of probation after serving jail time, according to the newspaper Haaretz.

The judges cited the value of life and the severity of Azaria's crime, as well as his service record, in making their decision, Haaretz reported.

His defense attorney vowed to appeal the sentence, considered mild compared with the three to five years the prosecution had requested.

Elor Azaria, 18, was convicted of manslaughter in January after the court ruled he had "needlessly" killed Abdul-Fattah Sharif by shooting him in the head following an alleged attack in the occupied West Bank city of Hebron.

The incident was filmed by activists for the Israeli B'Tselem human rights group. In the video, Azaria is seen raising and aiming his rifle, then a shot is heard. Al-Sharif's head jolts, and he can then be seen with what seems to be a fresh head wound as blood trickles down the street.

The 21-year-old Azaria claimed that he believed al-Sharif had been wearing a bomb belt at the time of the shooting.

While the court rejected Azaria's argument that he had feared Sharif was armed when he shot him, Judge Maya Heller said the sentencing took into account the "hostile territory" on which the incident took place and the effect of the highly-politicized trial on Azaria's family.

Military prosecutors had demanded a sentence of three to five years in prison for Azaria, who has remained in open detention on an army base since the shooting.

The case has split Israel, where military service is compulsory, and raised questions about rules of engagement towards perceived threats by Palestinians.

Israeli Prime Minister Benjamin Netanyahu, who is currently on a trip to Singapore and Australia, was one of several politicians who backed pardoning Azaria after he was convicted of manslaughter last month.

The Palestinian government has slammed what it termed a "mock trial," last month calling it a farce at best.

"A trial of the entire occupation authority, which rushes to incite against Palestinians and commit dozens of crimes against them," is needed, not a guilty verdict for a single soldier, a statement said.