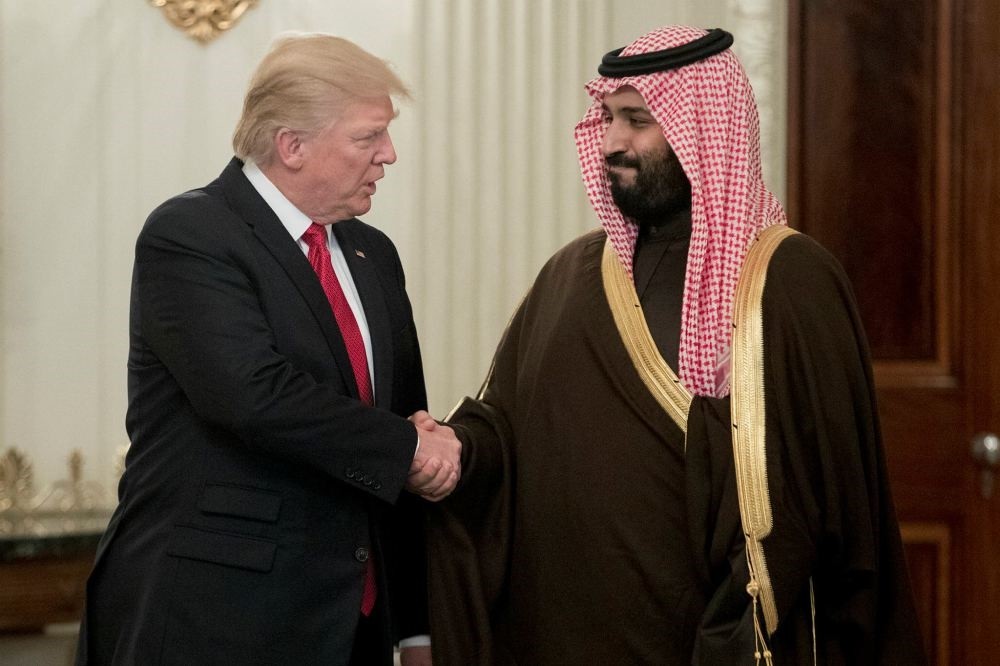 US President Donald Trump shakes hands with Deputy Crown Prince and Defense Minister Mohammed bin Salman bin Abdulaziz Al Saud before a lunch in the State Dining Room of the White House in Washington, DC, March 14.
by Compiled from Wire Services Mar 16, 2017 12:00 am

After a period of tense relations, a meeting between U.S. President Trump and Saudi Prince Salman at the White House points to warmer relations as both leaders agree that Iran poses a regional security threat

Trump shook hands with Prince Mohammed in the State Dining Room before joining several White House and Saudi officials for lunch. The Saudi royal's visit marks the highest level one to Washington since the November presidential election. The prince is leading the Kingdom's economic overhaul to become less dependent on oil.

Saudi Arabia hailed the meeting as a pivotal moment in U.S.-Saudi relations, saying, "This meeting is considered a historic turning point in relations between both countries which previously passed through a period marred by diverging views on many issues," a senior adviser to Prince Mohammed said in a statement. "But the meeting today restored issues to their right path and forms a big change in relations between both countries in political, military, security and economic issues."

Tuesday's meeting appeared to signal a meeting of minds on many issues addressed between Trump and Prince Mohammed, in stark contrast to Riyadh's often fraught relationship with the Obama administration, especially in the wake of the 20155 Iran nuclear deal. The U.S. and Saudi Arabia have a decades-long relationship that has been based on the exchange of American security for Saudi oil.

Saudi Arabia viewed the administration of former U.S. President Barack Obama with unease, considering him to be more concerned with Riyadh's alliance with Washington than negotiating the Iran nuclear deal.

Riyadh and other Gulf allies see in Trump a strong president who will shore up Washington's role as their main strategic partner and help contain Riyadh's adversary Iran in a region key to U.S. security and energy interests, regional analysts said.

The deputy crown prince viewed the nuclear deal as "very dangerous," the senior adviser said, adding that both leaders had identical views on "the danger of Iran's regional expansionist activities." The White House has said the deal was not in the best interest of the U.S. Iran denies interference in Arab countries.

Second in line to the throne, Prince Mohammed is the son of King Salman and holds the post of defense minister, although much of his focus is on economic issues. He is the chief proponent of Vision 2030, a wide-ranging social and economic reform plan begun last year to diversify the oil dependent economy. He has also played a key role in the Yemen campaign.

Trump has expressed hope that Saudi Arabia and other Gulf allies can be helpful across a range of issues, from creating safe zones in Syria to solving the Palestinian-Israeli conflict. Riyadh is also seen by the White House as pivotal in any effort to constrain Iran's influence across the Middle East. However, that strategy has been widely questioned.
RELATED TOPICS