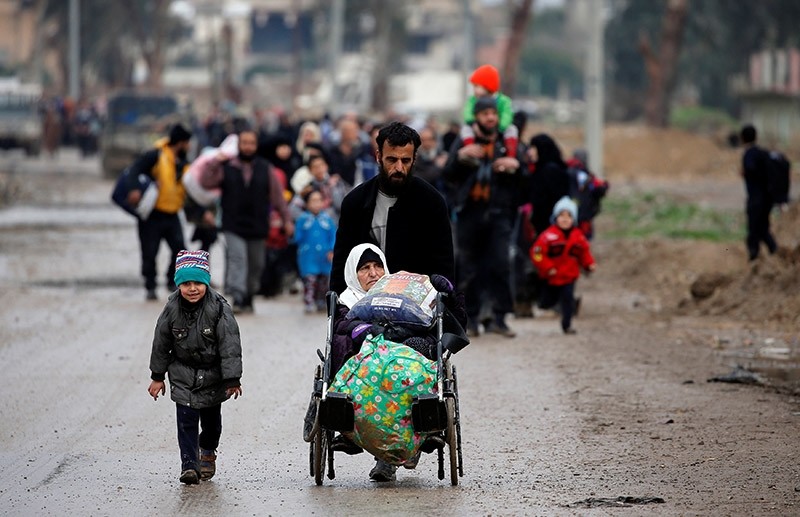 Displaced Iraqi people from different areas in Mosul flee their homes after clashes to reach safe areas, as Iraqi forces battle with Islamic State militants in the city of Mosul, Iraq March 18, 2017. (Reuters Photo)
by Mar 18, 2017 12:00 am

Thousands of Iraqis surged out of western Mosul on Saturday during a lull in heavy fighting in districts around the densely populated Old City where Iraqi forces are facing fierce resistance from Daesh terrorists.

Five months into the battle to take the Daesh terror group's last bastion in Iraq, government forces have cleared the east and half of western Mosul, and are now focused on controlling the Old City as well as the strategic al-Nuri Mosque.

As fighting has entered into the narrow alleyways and densely populated parts of the west, more residents are fleeing liberated areas where food and water are scarce, security fragile and where homes are often caught in shelling.

"We have been trapped for 25 days. No water, no food, everyone will die and they will have to pull us from the rubble," said one resident of Bab Jdid district, not giving his name because relatives remained inside Mosul.

Families with elderly relatives and children marched through western Mosul's muddy streets, past buildings pock-marked by bullet and bombs. Some said they had hardly eaten in weeks, scrambling for supplies handed out by a local aid agency.

"It is terrible, Daesh has destroyed us. There is no food, no bread. There is absolutely nothing," said another resident.

As many as 600,000 civilians may be caught inside the city with the terrorists.

Iraqi forces cut off Mosul from the remaining territory that Daesh controls in Iraq and Syria. But even in liberated areas, many prefer to leave the city amid heavy fighting.

Around 255,000 people have been displaced from Mosul and surrounding areas since October, including more than 100,000 since the latest military campaign in western Mosul began on Feb. 19, according to United Nations figures.

The last week has seen the highest level of displacement yet, with 32,000 displaced between March 12 and 15.

Heavy rains and clouds this week restricted air cover and helicopters, slowing the advance of Federal Police and Rapid Response forces who are consolidating positions around the Old City and the al-Nuri Mosque.

"The weather is cloudy and rainy but our forces are advancing toward their targets," Federal Police Major General Haider Dhirgham told reporters at the forward base inside Mosul. "In a few steps and strikes we will reach the Nuri mosque."

As terrorists retreat into the confined streets of the Old City, Daesh has been resisting with snipers, mortars and the armored suicide car bombs that plough into army positions.

U.S. officials have estimated that around 2,000 militants remain inside the city. But even after the liberation of Mosul, there are risks that terrorists will return to the kind of guerrilla warfare and bombings they have used in the past.