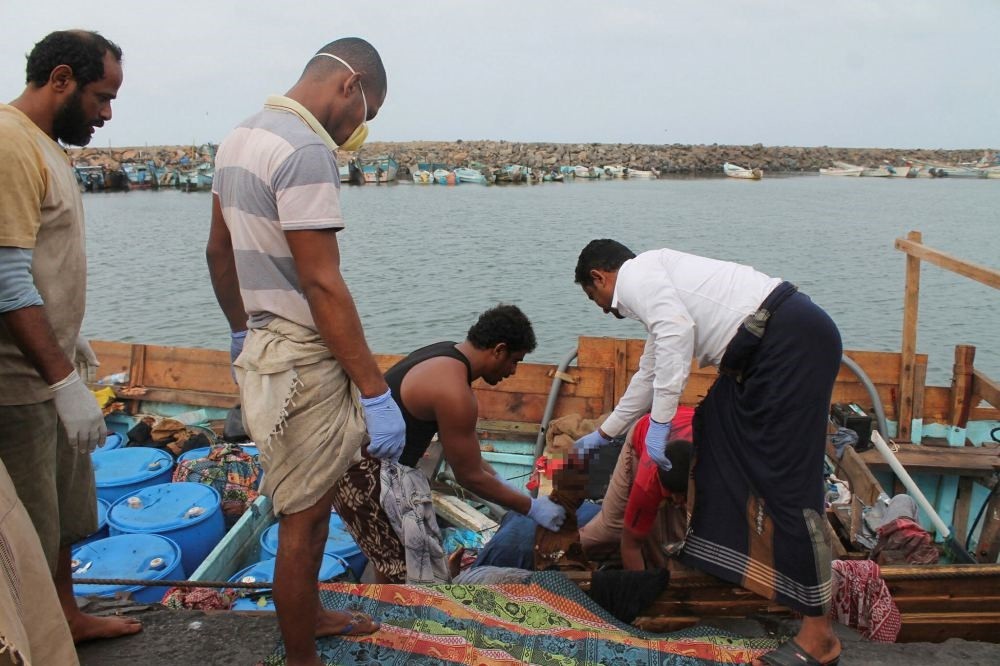 At least 42 Somali refugees died after their boat was attacked by a helicopter near the Bab al-Mandeb strait on March 17.
by Compiled from Wire Services Mar 21, 2017 12:00 am
A Saudi-led coalition fighting in Yemen called on Sunday for the United Nations to place a strategic port under its supervision after 42 Somalis were killed in an attack on their refugee boat nearby. The refugees had departed from the western port city of Hodeidah en route to Sudan when it came under fire in an incident aid workers said had involved a helicopter.

The Red Sea port near the Bab al-Mandab strait is under the control of Yemen's armed Houthi rebels, which has been fighting Saudi Arabia and its allies in a two-year-old conflict.

While the Arab alliance denied responsibility for the attack on Friday, it called for jurisdiction over Hodeidah port to be transferred to the U.N.

"This would facilitate the flow of humanitarian supplies to the Yemeni people, while at the same time ending the use of the port for weapons smuggling and people trafficking," it said in a statement. It did not address a call by Somalia to investigate. It is still unclear who was behind the assault. "We do not know who carried it out, but survivors said they came under attack from another boat at 9 p.m., the crew used lights and shouted to signal this is a civilian boat," Iolanda Jaquemet, a spokeswoman for the International Committee of the Red Cross, has said. "Nevertheless, it did not have any effect and a helicopter joined in the attack," she said.

Hodeidah is part of a broad battlefront where forces loyal to Yemeni President Abd-Rabbu Mansour Hadi, backed by the Saudi-led coalition, are fighting the Iran-allied Houthi movement, which controls most of northern and western Yemen.

The Bab al-Mandab is a strategic waterway through which nearly 4 million barrels of oil are shipped daily. Yemen fell into civil war in 2014 after Houthi rebels overran capital Sanaa and other parts of Yemen, forcing members of the country's internationally-recognized government to temporarily flee to Saudi Arabia. The following year, Saudi Arabia and its Arab allies launched a major air campaign aimed at reversing Houthi military gains and shoring up Yemen's Saudi-backed government. Saudi Arabia and its Gulf allies also accuse Tehran of arming and supporting Yemen's Shia Houthi group, which overran the capital Sanaa and other parts of the country in 2014. The six-year conflict in Syria has also contributed to the deterioration in Gulf-Iran relations.

Yemen has been wracked by chaos since late 2014, when Houthi rebels and their allies overran the capital, Sanaa, and other parts of the country. The conflict escalated in mid-2015 when Saudi Arabia and its Arab allies launched a major air campaign aimed at reversing Houthi military gains and shoring up Yemen's embattled Saudi-backed government. The U.N. says the conflict has left more than 19,000 people dead and displaced at least 3 million.
RELATED TOPICS