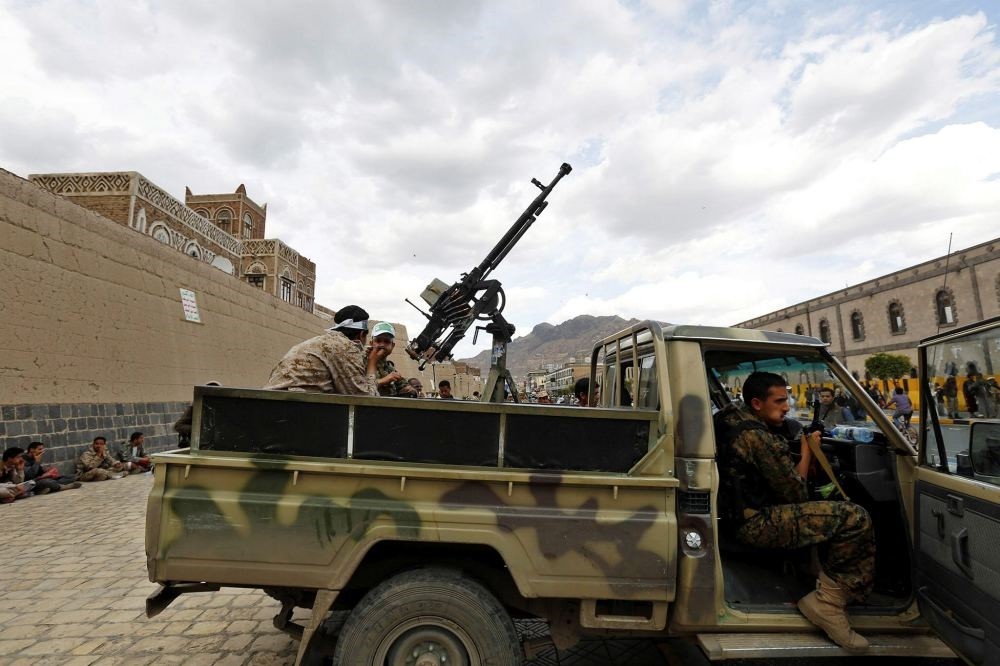 Houthi fighters man a heavy machine gun fixed on the back of a pickup.
by Daily Sabah with Reuters Mar 23, 2017 12:00 am

Iran continues to send advanced weapons and military advisers to its Shiite allies in Syria, Iraq and Yemen while stepping up support for civil wars whose outcome could sway the balance of power in the Middle East

Playing the sectarianism card to keep relations tight with Shiite minorities in the region, Iran has stepped up its advanced weapons supply to its allies in Yemen. This mirrors the strategy it has used to support its Lebanese ally Hezbollah in Syria and Hashd al-Shaabi militants in Iraq.

"At this meeting, they agreed to increase the amount of help, through training, arms and financial support," the official said. "Yemen is where the real proxy war is going on and winning the battle in Yemen will help define the balance of power in the Middle East."

Iran rejects accusations from Saudi Arabia that it is giving financial and military support to the Houthis in the struggle for Yemen, blaming the deepening crisis on Riyadh. But Iran's actions in Yemen seem to reflect the growing influence of hardliners in Tehran, keen to preempt a tougher policy towards Iran signaled by U.S. President Donald Trump.

Sources say Iran is using ships to deliver supplies to Yemen either directly or via Somalia, bypassing coalition efforts to intercept shipments. Western sources say once the ships arrive in the region, the cargoes are transferred to small fishing boats, which are hard to spot because they are so common in these waters. Favored areas are believed to include fishing coves around the port of Mukalla, even though that would require smuggled men or equipment to make a long risky journey to the main Houthi-controlled

districts. The coalition ejected al-Qaida from the area last year, but still cannot prevent the smuggling of weapons and people, according to sources familiar with the waters.

The Arab coalition's General Asseri acknowledged the difficulties of policing 2,700 kilometers (1,677 miles) of coastline around Yemen. "You cannot observe this length of coast even if you bring in all the navies of the world," he said. "If we stop movement of those small boats, this will affect fishing by normal people."

From September 2015 until March 2016, the French and Australian navies frequently intercepted weapons which officials said were most likely bound for the Houthis. A U.S. defense official said Iranian weapons smuggling to the Houthis had continued apace since March of last year, when the seizures stopped. The equipment included long-range ballistic missiles capable of reaching deep into Saudi Arabia. "There is no plausible explanation for these weapons' appearance other than outside assistance. We assess that assistance has likely come from Iran," the U.S. official said.

In addition to the weapons, Iranian and regional sources said Tehran was providing Afghan and Shiite Arab specialists to train Houthi units and act as logistical advisers. These included Afghans who had fought in Syria under Qods Force commanders to work with Bashar Assad's forces. They are known in Iran as "defenders of the shrines," in reference to sacred Shiite sites in Syria. Iran has helped the Assad regime throughout the war, dispatching thousands of soldiers, mobilizing the Hezbollah group and delivering millions of dollars, despite its troubled economy due to international sanctions.

Iran denies having any boots on the ground in Syria, and insists its commanders and generals of the elite Revolutionary Guards' foreign operations wing act as "military advisers" both there and in Iraq. The Tehran administration has gone into a deadly war against civilians, not only in Syria but also in Iraq, by giving unconditional support to the Hashd al-Shaabi militants, who are infamous for their brutal acts against Iraq's Sunni citizens. In Syria, Iran has gained a strong position. The country has helped the Assad regime throughout the war, dispatching thousands of soldiers, mobilizing the Hezbollah group and delivering millions of dollars, despite its troubled economy due to international sanctions.
RELATED TOPICS