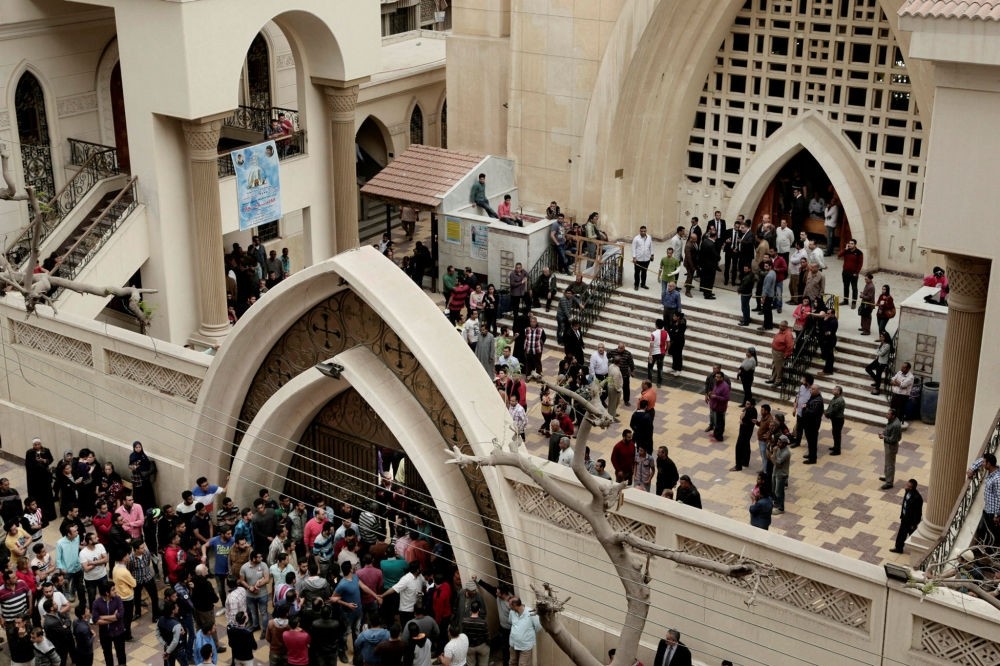 People gather outside St. George's Church after a deadly suicide bombing in the Nile Delta town of Tanta, Egypt, April 9.
by Compiled from Wire Services Apr 11, 2017 12:00 am

After the twin bombings of churches in Egypt over the weekend, Egypt and Israel have taken extra security measures as the Daesh terrorist group continues to lose ground in Iraq and Syria, renewing its motivation to carry out deadly attacks in the region

Egypt prepared to impose a state of emergency Monday after jihadist bombings killed dozens at two churches in the deadliest attacks in recent memory on the country's Coptic Christian minority.

President Abdel-Fattah el-Sissi announced the three-month period, which will vastly increase the powers of Egypt's security forces, after the Daesh terrorist group claimed the twin bombings that struck worshipers as they celebrated Palm Sunday mass.

In a defiant speech, he warned the war against militants "will be long and painful" after he had ordered the army to protect "vital infrastructure" and increase security along Egypt's borders.

Daesh has been waging a deadly insurgency in the Sinai Peninsula and has claimed scores of attacks on security forces there. But it has been unable to seize population centers, unlike its early gains in Iraq and Syria, and it has also lost top militants to Egyptian military strikes in recent months. Analysts say Sunday's bombings suggest the group is lashing out as it finds itself under increasing pressure in other countries.

Meanwhile, a rocket fired from Egypt's Sinai crashed into Israel yesterday, in an attack claimed by Daesh, as authorities closed a border crossing over security threats, officials said.

Israel closed its Taba border crossing to Egypt Monday following a warning by its anti-terrorism office and intelligence reports of an "imminent" militant attack there. The closure comes hours before the start of the Passover holiday, when Sinai is a popular destination for many Israelis.

Soon after the announcement, sirens wailed in parts of southern Israel alerting residents to a rocket attack. The military said a rocket fired from Sinai exploded in southern Israel, hitting a greenhouse but causing no injuries.

Yisrael Katz, Israel's transportation and intelligence minister, said in a statement Monday there was intel regarding a potential "terror attack" against tourists in the Sinai peninsula. The crossing remains open for those wanting to return from Egypt.

The Israeli government statement says that intelligence information shows "increased activity by Islamic State [Daesh] militants" in Sinai. It adds that with the Daesh group losing ground in Iraq and Syria, there is renewed "motivation to carry out terror attacks in different arenas at this time."

Southern Sinai, with its pristine beaches and Red Sea coral reefs, has traditionally been a popular Israeli tourist destination — especially for secular Israelis during the Passover holiday that starts Monday evening. But tourism there has declined since 2013, when the Egyptian military overthrew an elected Islamist president and an Islamic insurgency based in northern Sinai intensified.

Israel issues travel recommendations from time to time based on intelligence reports. Monday's travel warning was unusual in its urgency and it is rare for the Taba crossing to be shut down. Israel signed a peace treaty with neighboring Egypt in 1979.

The attacks on the Mar Girgis church in the city of Tanta north of Cairo and Saint Mark's Church in the coastal city of Alexandria came just weeks ahead of a visit by Pope Francis to show support for Egypt's large Christian minority. The second blast at the church in Alexandria, Egypt's second largest city, killed at least 11 people and wounded 35, according to the health ministry. Tawadros had been attending a mass at the church but a Coptic Church official said he had left before the blast. Francis, who is due to visit Cairo on April 28-29, offered prayers for the victims.

The militants have attacked Egyptian Coptic Christians before, but their campaign against the minority picked up in December with a Cairo church bombing that killed 29 people. In Sinai, Daesh militants killed seven Copts in January and February, forcing dozens of Christian families to flee the peninsula that borders Israel and the Palestinian Gaza Strip.