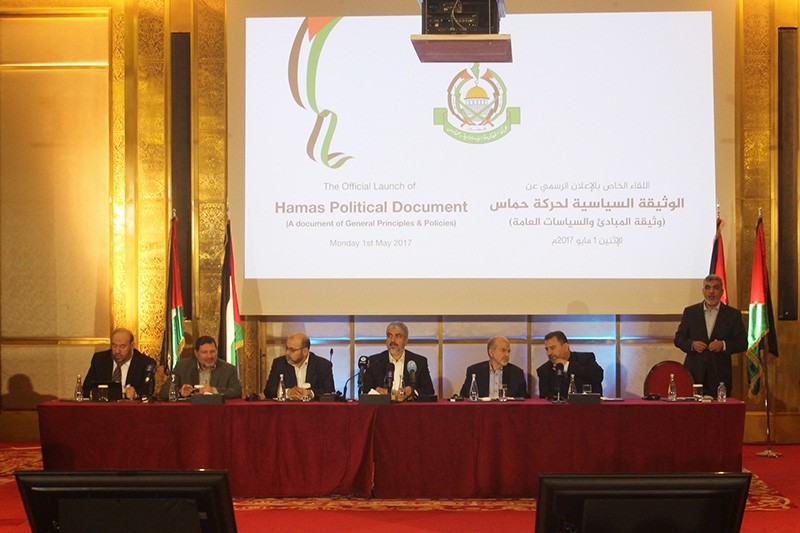 After distancing itself from the Muslim Brotherhood by changing its administrative cadre, the group finds a way to survive in the region, unveiling a new political charter

Hamas leader Khaleed Mashaal revealed the new road map for peace in the conflict between Palestine and Israel as he announced the group's revised foundation document in a press conference in the Qatari capital Doha.

Mashaal, the group's exiled leader, said there is no compromise in liberating historical Palestine and no recognition of Israel. He said that Hamas agrees on building a sovereign Palestinian state within the 1967 borders in a base agreed on by all Palestinian parties. A state along the 1967 borders is the goal of Hamas' main political rival, the Fatah movement, which is led by Mahmoud Abbas. Hamas also recognized the Palestine Liberation Organization (PLO) as the "national framework" for Palestinians. Mashaal added that Hamas rejects any initiative that fails to recognize Palestinians' right to return to their lands.

The latest move reveals that Hamas has apparently been attempting to find a new way to survive in the region by revealing a new road map for the Israeli-Palestinian conflict, detaching itself from the Muslim Brotherhood and improving ties with Egypt in return for Egypt directing its attention to the needs of Gazans.

Hamas recently moved to secure its position in the region by making a significant change to its administrative cadre while accepting collaborative efforts with Egypt to fight the presence of Daesh in Sinai. After declaring itself an entirely independent organization with no affiliation with any parent organization such as the Muslim Brotherhood, Hamas stated its intentions to mend ties with Cairo, as they both suffer from the presence of radical movements.

In its new program, Hamas redefines itself as a national liberation group, distancing it from its parent movement, the pan-Arab Muslim Brotherhood, which has been outlawed by neighboring Egypt. Ahmad Yusuf, a senior Hamas leader considered one the organization's pragmatists, said the new document signaled "an important shift in the way Hamas is thinking," that will give it more flexibility internationally.

Hamas leaders had previously floated the idea of accepting a long-term truce with Israel that established a Palestinian state along the 1967 borders, but Monday's announcement meant it became official Hamas policy.

In 1967, Israel captured Gaza, the West Bank and East Jerusalem from a coalition of Arab states in what is known as the Six-Day War. With the signing of the Oslo Accords, Israel withdrew from parts of the West Bank and handed over control in some pockets to the newly-created State of Palestine (Palestinian National Authority). However, Israel maintains strict military control over the movement between Palestinian pockets of control and to their east to Jordan, in addition to continuing construction of new settlements in Palestinian lands. Israel also withdrew from Gaza in 2005, but it is de-facto under Israeli blockade.

The new political document also came with an updated notion of the use of force. "The struggle against Zionism is not against Jews and the Jewish faith. We oppose all kinds of violence and extremism," Mashaal said, noting that the fight is against "Zionist occupation."

He said it also underlines that opposition to Israel does not need to be through armed means and that the document is more suited to their current position, as the ruling faction in the blockaded Gaza Strip, than the founding charter, which was intended to motivate Palestinians during the First Intifada uprising against Israeli rule.

He said the group went through the charter and removed elements they believed could be used to portray them as anti-Semitic.

Hamas's move appears aimed at improving relations with Gulf Arab states and Egypt, which label the Muslim Brotherhood a terrorist organization, as well as with Western countries, many of which classify Hamas as a terrorist group because of its hostility toward Israel.

Mashaal added the new manifesto reflects common vision of all Hamas leaders and institutions both in Palestine and abroad, noting that the group has been working on the wording of the draft for the last two years.

"The document is available to anyone who wants to know about Hamas and its policies," Mashaal said. "The document reflects the consensus and reconciles Islamic and international principles."

Israeli prime ministerial spokesman David Keyes dismissed the document, accusing Hamas of unsuccessfully "attempting to fool the world" while continuing to use violence against Israel.