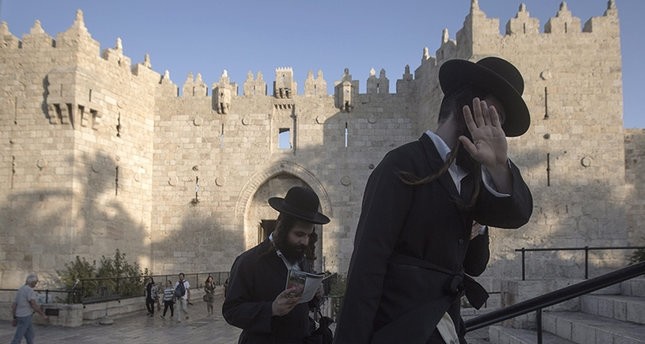 Ultra-Orthodox Jews and muslims passing at Damascus gate of the the old city of Jerusalem, 22 September 2016 (EPA Photo)
by Daily Sabah with Agencies May 02, 2017 12:00 am

The executive board of the UN's Educational, Scientific and Cultural Organization (UNESCO) on Tuesday passed a resolution describing Jerusalem as "occupied" and challenging Israeli sovereignty over the city, saying that it is "entirely Palestinian."

UNESCO adopted the resolution with 22 member states voting in favor, 10 voting against and 23 abstaining.

The resolution states that Jerusalem's Old City is "entirely Palestinian" and stresses its historical "Muslim and Christian" heritage.

The decision also describes Israel as an "occupying power" that has no sovereignty over the city.

What's more, the resolution affirms the Islamic character of the Ibrahimi Mosque in the city of Hebron (Al-Khalil) and Rachel's Tomb in the city Bethlehem.

Earlier Tuesday, in anticipation of the resolution's adoption, Israeli Prime Minister Benjamin Netanyahu declared: "We [Israel] does not believe in UNESCO."

"There is no other people in the world for whom Jerusalem is as holy and important as for the Jewish people," he added.

Israel occupied East Jerusalem during the 1967 Middle East War. It unilaterally annexed the entire city in 1980, claiming it as its "eternal and undivided" capital in a move never recognized by the international community.