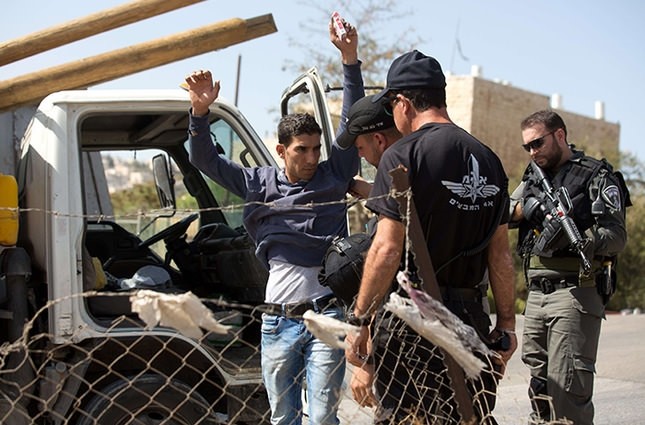 Israeli border policemen check a Palestinian driver on a road linking the Palestinian neighbourhood of Jabal Mukaber in East Jerusalem and Jerusalem on October 14, 2015 (AFP Photo)
by May 05, 2017 12:00 am

The executive board of the UN's cultural agency ratified Friday a resolution that identifies Israel as "the occupying power" in Jerusalem and calls on it to rescind any move changing the city's "character and status."

The resolution had been passed by a UNESCO commission on Tuesday, sparking anger in Israel.

The text, approved at UNESCO headquarters, denounces "all legislative and administrative measures and actions taken by Israel, the occupying power, which have altered or purport to alter the character and status of the Holy City of Jerusalem."

It said such moves were "null and void and must be rescinded forthwith".

It particularly criticised Israel's annexation of east Jerusalem after occupying it in 1967, a move that remains unrecognised by the international community.

The resolution had been passed on Tuesday by 22 votes to 10, with 23 abstentions.

It drew the ire of Israeli Prime Minister Benjamin Netanyahu, who responded this week by cutting his country's UN funding by $1 million.

Saying the resolution denies Jews' historical connection with Jerusalem, Netanyahu called the move "absurd" and said "this systemic harassment has a price."

It was the third time in recent months Israel reduced its UN budget over what it considers anti-Israel votes, putting the 2017 payments at $3.7 million instead of the original $11 million, an Israeli official said.

Israel had already locked horns with UNESCO in October, when the agency's World Heritage Committee adopted a resolution voicing concern about threats to the city from Israeli building works and archaeological excavations.

Israel considers all of Jerusalem its undivided capital, but the Palestinians want the eastern part, including the Old City, as the capital of a future state.